10 Successful Businesses That Started in College

Are you tired of constantly job hunting? As college kids, we know how much money means. If there’s free food, we’re there, or if there’s a discount at the grocery store, we definitely know about it. But what if there was a way we could not worry about money? What if you could take that great idea you have and turn it into something huge? Here are a few people who started their businesses in college, and no longer have to worry anymore.

How many times have you said, ‘Oh I’ll just Google it. No big deal.’ Google has made everyone’s life so much easier. If you need to search for anything and everything, chances are Google has it. But have you ever stopped to think about the genius minds that created Google? Sergey Brin and Larry Page from Stanford University, while studying for their PhD’s, first started a search engine called ‘Back Rub’ around 1996. However as time went on and people began to invest, they changed the name to Google. Google grew from a search engine to including maps, video, images, e-mail, and even blogs. There is even a website dedicated to proving that Google is God. So the next time you’re on Google, think about it. Two men created the website that you are using for everything, and they are earning tons of money. Crazy isn’t it?

Mark Zuckerberg created Facebook while in his dorm room at Harvard in 2004. He is now the world’s youngest billionaire. By now I’m sure we’ve all seen The Social Network, and no, it isn’t 100% factual, but it gives you an idea of the process it takes to create such a site. If you doubt his success, then ask yourself this question: how many of us use Facebook everyday? That’s what I thought.

Did you know that this magazine was created by two seniors at Yale in 1923? Briton Hadden and Henry Luce created the magazine after working as chairman and managing editor, respectively, at the Yale Daily News. We all know the reputation Time has and how many people read it across the world. By 1967, when Luce had died, the company’s stock was worth $109 million. Can you imagine how much it’s worth now?

Okay so we all know Bill Gates founded this, but did you know that he dropped out of Harvard to pursue the business plans for this company? By 1976 the word Microsoft had been registered and two years later the first international company was opened. By 1980 an early version of Microsoft Word was created and shortly thereafter a deal with IBM was struck. In 2009 Gates enjoyed the title of wealthiest man in the world raking in a total of $40 billion. Microsoft is now involved in everything from phones to gaming devices, and everything in between. As I’m writing this article, I am using a product that Bill Gates created… and he’s making $40 billion a year. What a genius!

Frederick W. Smith got a head start with his emerging business, FedEx, in the 1970’s during grad school. He began with a term paper that outlined how a delivery service could take advantage of emerging technologies and understand the Federal Reserve system in order to ship packages overnight. Smith’s work carried over to Yale when he used Little Rock National Airport to create the company he outlined in his paper. FedEx ships overnight deliveries across the world, and is one of Forbe’s 400 Best Big companies. Smith’s salary is said to be over a million a year, not too shabby for someone who started this with a term paper in college. Will his children ever worry about tuition and loans? Nope.

Michael Dell began his company at the University of Texas at Austin, and like Zuckerberg, he began with only $1,000 and is now making over $2 million. Dell dropped out of college after the immense success he obtained from making customer service accessible. Dell’s key idea here was that he ‘cut out the middle man’. His company would provide customers with easy access home product assistance with employees willing to make house calls. Dell’s innovation with creating computers and their outlet as computer support makes them one of the top companies in the world today. 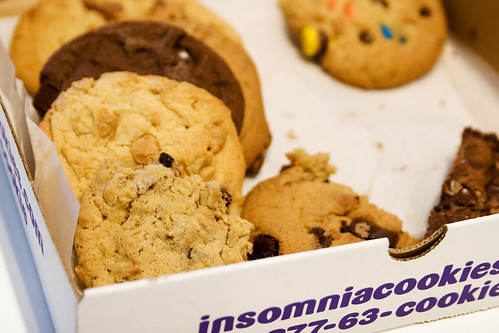 Yes this is exactly what you think it is. Google it, I dare you. This is a company that was created by a junior at the University of Pennsylvania in 2002 when he got hungry after an all-nighter. Let’s stop here… how many of you reading this are taking a study break at night and are currently eating something? Well, Seth Berkowitz turned his cookie cravings into a largely successful business that now delivers cookies to any dorm! So if your stomach is starting to growl and you want something sweet, try the cookies, or try a business plan like Berkowitz.

Tripod.com is a website that provides different services online for college students and young adults. Founders Brett Hershey, Bo Peabody, and Dick Sabot came up with the idea for a paid service and magazine geared towards college students and then turned it into the popular website. The company included several textbooks, as well as creating a tool kit for students to develop a resume, network, create a website, and add links to their website that would draw in their audiences. The company has since made over $58 million.

When downloading music illegally became all the rage, Napster was everyone’s go-to site. Free and quick downloads meant that you no longer had to spend twelve bucks for a CD, or leave the comfort of your own home. Student Shawn Fanning of Northeastern University (along with the infamous and entrepreneurial Sean Parker) created this program where people could share their MP3 files. While Napster at first saw heavy traffic and was hugely popular, it wasn’t long before “the man” stepped in and ruined everything. The problem was that this was a huge infringement on copyright, and numerous artists and the music industry slammed Fanning for it. So while he did make tons of money, he ended up paying hefty legal fines…but the music and film industries have never been the same. Now the site is used to preview music before you buy it.

This company should kick my ass into gear seeing as it started in the very school which I attend. The company was started by Omar Soliman and Nick Friedman, two undergrads from the University of Miami, who needed extra money in between semesters…So they began taking unwanted goods away. The company expanded to the point where they currently own over 50 franchises and earn over $10 million in sales. Can you imagine? From a summer job to millions? Maybe I’m in the wrong major…