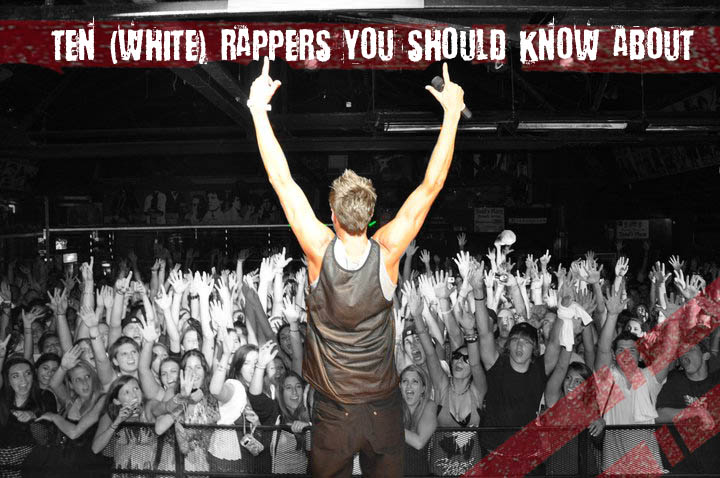 The white rapper isn’t anything new to the music industry. In the beginning there was The Beastie Boys, Vanilla Ice, Marky Mark, Eminem, and Asher Roth. Now the market for white rappers is burgeoning. It seems like everyday there is a new artist trying to get his name out there. While it is difficult to avoid the white rapper label or the frat rap genre, some have been able to brand themselves in a way that separates them from the seemingly endless list of white rappers coming out the woodwork. Here are 10 rappers that should be on your radar.

You must have been living under a rock if you haven’t heard about Sam Adams yet. This time last year Sam Adams was entering his last semester at Trinity College in Hartford, Connecticut. Since then, he’s topped the iTunes charts, released one of the best mixtapes of 2010, and performed sold out shows from coast to coast.  The Campus Socialite had the opportunity to sit down and interview Sam Adams in NYC, where he talked college and  his new lifestyle.

When Mac Miller released K.I.D.S. it was like a space shuttle taking off into the stratosphere. Few could have predicted his success. Coming off the east coast leg of his “Incredibly Dope Tour,” Mac Miller has secured a spot as a shoe in for the cover of XXL Magazine’s 2011 freshman class.

Yelawolf emerged from the backwoods of Alabama and stepped into the forefront of talented southern rappers. Having recently inked a deal with Eminem’s record label, Shady Records, Yelawolf has the potential to breakout into the mainstream in 2011 as one of the music industry’s most promising artists.

Latest Project: Best In The Burbs

Chris Webby has been on his grind for a while now. He is constantly perfecting his craft in the studio, putting out new material on a regular basis. His most recent mixtape, Best In the Burbs, was downloaded so many times that it crashed the server of the largest mixtape distributor, DatPiff.com.

Few rappers jump on a track with more energy than MGK. From the tattoos to his insane flow, the kid is a rockstar. Lace Up was an impressive mixtape that let people know who he is, where he’s from, and what he’s all about. Look out for more music and viral videos, and be sure to catch him on a nationwide tour this spring.

To say that Benn Haggerty, better know by his stage name Macklemore, has paid his dues would be a gross understatement. Having been on the grind for the better part of the last decade, he has recently found success outside of the Pacific Northwest with his latest EP—think Atmosphere mixed with Mike Shinoda of Linkin Park.

As the front man for hip hop/ rock/ pop group Vonnegutt, Kyle Lucas has been able to generate a good amount of internet buzz. It’s Always Sunny in Marietta was a side project that proved to many why he has what it takes to make it as a solo artist. Look out for more Kyle Lucas features in the near future.

At one point OnCue and Chris Webby were classmates at Hofstra University. It is only fitting that they have gone on to rock sold out shows together in the Northeast. OnCue combines inspirational lyricism with unique classic/ indie rock samples in a way that hasn’t been done before. Check him out if you haven’t already.

Rock Comedian Brian Smith recently interviewed Hoodie for The Campus Socialite, so you might already be familiar with him. For those of you who aren’t quite up to speed, Hoodie Allen has developed a dedicated fan base, inked a record deal, and booked full touring schedule on the strength of his latest project, Pep Rally.

Who better to get the party started than Na Palm? The title of his mixtape is Dirty Girls Like Dirty Beats. Pretty self explanatory if you ask me. Who wouldn’t want to party two days straight with the guy? Pool parties, yatchs, clubs, and tons of insanely hot girls: sign me up. Look for Na Palm to heat it up on tour in the coming months.