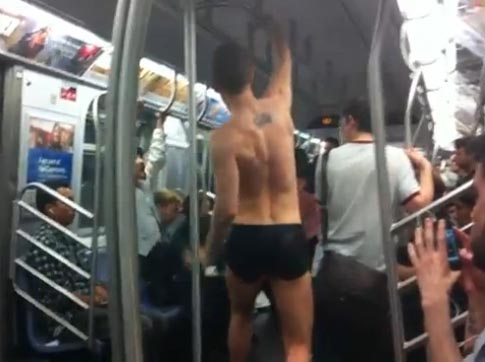 Anyone who takes public transportation in their city knows how real shit can get when a crazy person gets on the train or bus. Your boring commute becomes an entertainment story worth taping on your cellphone or blogging about. Below we present 10 videos of insane public transportation incidents. Let us know if you have a better one.

Apparently a bipolar disorder, subways, and old ladies don’t mix very well. This old lady manages to keep her cool and straight face while being yelled and rapped at from a young girl.  You thought she couldn’t freestyle on you, boo? Click play above to see the half hilarious/ half WTF incident on Atlanta’s MARTA train.

No Place for Lesbians and Batty Boys

New York’s daily commute is full of Mariachi Bands and teens selling candy for an unknown cause, but once in a while you come across the seemingly normal person who bursts out in a discriminating song. Prime example: the Caribbean lady in the video above who doesn’t like lesbians and batty boys — a Jamaican term used to describe gay men. No candy sales necessary. Just straight info.

Everyone wants to be a stripper when they face the poles in a NYC subway car. This man may not have the body, but he apparently has all the moves, and what better place to strut your stuff than an uncrowded subway car. Bonus (or not): riders get an unsolicited peepshow at the end.

When you’re tired at life, falling asleep against a glass sliding door seems like such a good idea, right? I agreed at first but then I watched the end of this video.

NYC is full of crazies, and those freaks come out in droves during the morning and evening rush hours. In this video, a lady spends some time talking shit to no one before kicking a passenger who was just minding their business and threatening to “beat the fuck up” out of another passenger. Here’s a tip for anyone taking NYC public transportation: if a crazy person is in your vicinity, get your ass as far away from them as possible!

The awkward moment when you’re sitting on the train trying to read your book, and the guy across from you insists in engaging in an argument. The even more awkward moment when he refers to himself as “Bloody Loco” and thinks of himself as one of NYC’s million “upcoming” rappers. Find me a book that’s more entertaining than that.

This was like something out of a cartoon. There’s nothing funnier than seeing that annoying girl on the school bus bust her ass on the roof. How does that even happen? Watch and see. It somehow looks simultaneously fun and painful, but I bet she didn’t feel like Superman on the way down.

My first time watching this video, I sat anxiously waiting for one of these guys to kick one of the passengers square in the head. Sadly, it never happened. These guys are actually pretty good. Who said white boys can’t dance?

Typically, New Yorkers mind their business. However, this woman thought it was her business to let a train rider know that eating on the Subway is apparently frowned upon. Guess what? No one gives a fuck about train riding etiquette. I’m hungry, I eat. You complain, you get your ass beat.