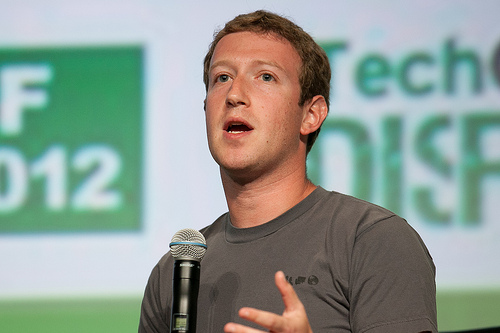 If you’re serious about making money from blogging, it’s a good idea to learn not only from successful bloggers, but also from those who have made their fortunes in other areas of online business.

The stand-out individual of recent times is Mark Zuckerberg. It’s fair to say he’s a guy who generates mixed responses, but whether you like his public personality or not isn’t important. There’s no doubt he’s a very rich and very clever businessman. When Facebook went public, the shares he sold made him a billionaire many times over, yet he still retains overall control – a very smart move.

So what can the ambitious blogger learn from him?

The growth of Facebook is often portrayed as meteoric: one minute there’s Mark and a few university buddies with the beginnings of an idea, the next there’s millions of people from all over the world connecting via a new social media platform.

The truth is a bit different. The growth rate was phenomenal, but it didn’t happen by accident. It was driven. Right from the start, Mark’s vision was not of providing  service to a few hundred people, or a few thousand, but of reaching as many people as possible. Even he may not have imagined the staggering impact it would eventually have, but he never limited its growth – he found ways to manage it and to encourage it.

You might start small, but the internet gives you the opportunity to reach a huge, global audience. There will be obstacles as you grow – but nothing that can’t be overcome. If you sell physical product, overseas shipping or distribution deals can be arranged. If you sell a service, you can reach out to freelancers or think about franchising. Facebook started in a campus dorm. You may not achieve the same levels in terms of pure numbers, but there’s nothing to stop your business reaching around the world if you want it to.

Focus is key to every successful entrepreneur and every successful blog. Recently, Mark Zuckerberg released the Facebook phone and has launched a global initiative that could effect 5 billion people (read more about that here). However, he didn’t start to diversify until the core Facebook business had become well established.

As a blogger and entrepreneur, it’s likely that you have the sort of mind that is frequently generating profitable ideas. That’s great, but you need to be careful not to get distracted. If something is going to complement your existing blog and add to it’s growth, by all means incorporate it. If it’s going to distract you from building your core business, you should probably put it aside until you’ve achieved your initial targets. Focus on one goal at a time. Achieve it, then decide what you want to do next. You’ll have a firm foundation and greater financial stability too.

Long-term relationships, the ones that help build successful blogs, are about interaction and about feeling connected. If you can persuade your potential customer that they are an important part of your online business, you stand a much better chance of making a sale.

Every successful blog – in fact just about every successful website – has some way of building that relationship. It usually starts with list building: gathering your prospects email address. Once you’ve got that email you don’t have to rely on them visiting your site, you can be proactive.

Facebook is an excellent example of this principle in action. Once you sign up, they don’t just wait for you to come back, they invite you in. You get an email that suggests you look for friends. You get an email when your friends do something. You get an email if they haven’t seen you for a while. Facebook doesn’t forget you – and doesn’t let you forget them.

It’s a big and very important subject – one we should probably deal with in more detail in another post. It needs planning and careful handling to deliver the best possible results.

Technically it presents no problems though, because for a surprisingly small monthly fee you can outsource the bulk of the work. It’s well worth doing, because in return you get an extraordinarily powerful and flexible tool. It’s not just a way to make a sale, it’s a way to build relationships and turn people into customers for life.