The land of South By South West Interactive (SXSWi). By far one of the most upbeat and fast paced events that any socialite will want to attend if they are hot on the social media and tech boat. Let’s face it, Mark “Zuck” Zuckerberg has made technology geeks the new celebrities of the world. Between the inception of platforms like Tumblr, Twitter, Turntable.Fm and Foursquare I think it’s time to acknowledge that geeks are no longer frowned upon. In fact, the new hot industry is actually right in the palm of your hands. Apps for your mobile hand held device are the new rage. If you’re not playing Draw Something or Words With Friends and you happen to own a device that supports them, then my friend you are obviously becoming a dinosaur. At SXSWi, of course us exclusive socialites can go behind the scenes because we’re “press.” We had a chance to go hands on with some of the hottest apps and put them to the test. We are only going to speak about the creme de la creme of the iPhone/Android apps that will spice up your college life, so read on nerd.

Looking for the next girl you want to date? Maybe you’re stalking her out, but the great feature about this location based application is that this is not considered stalking. In order for you to actually see that she is around your area, this lucky lady has to have the Highlight app downloaded in her mobile device. Next, be prepared to see how much you have in common with her because the app will now pick up on mutual interests based upon your Facebook profiles. More so, Highlight will now let you send her a message tailored with you finest digital game that you can conjure up. Oh, and don’t forget to put a short, witty and simple tag line about yourself to entice the connection. Highlight is free and beyond meeting women, we think you’ll love seeing who’s around you at your school incase you need to avoid getting kidnapped for your next hazing initiation or running away from that steroid ex-boyfriend of the girl you’re seeing.

The Negatives: Make sure you trim down how many applications you have open and use the application sparingly for now. Before you even go out, your battery might be drained.

We all love eBay right? I know I do. Every product is available from concert tickets to your used crappy couch with springs popping out. Now lets take that eBay concept and add a little location based requests from people around your area. For us, we needed an air mattress during our time in SXSWi. So, we booted up the Zaarly application, made a request for an air mattress to rent for $10 a day and blasted it out to locals in the Austin, TX area. Within 5 minutes, we had about 27 people ready and willing to deliver an air mattress to us in-hand. What a lovely app. Now think about this. You have a textbook that you want to get rid of because you finished the class that it was used for. Throw it on Zaarly and get rid of it without waiting on that nasty line for the book store.

Negatives: You might have some unreliable people that will want to fulfill your offer so don’t be discouraged. Move on to the next person who wants to fulfill the request. 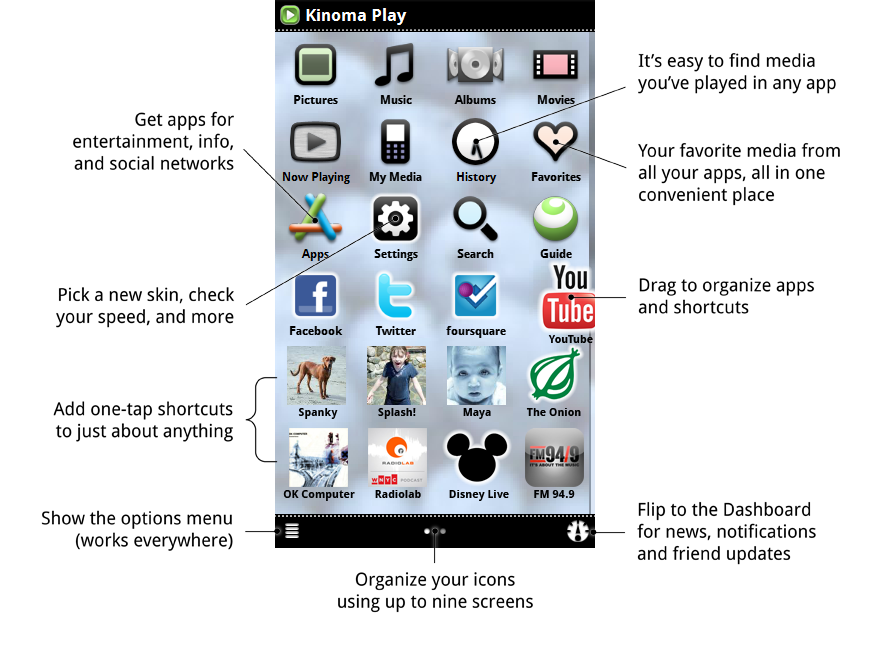 While I am not the biggest fan of an Android, there is no question it is one of the most popular mobile devices on the planet (I’m an iPhone guy). Kinoma Play caught my eye because after playing with an android, I was so f**king overwhelmed with the amount of apps that you can fit on to a screen as you flip through your device. Kinoma Play however pulls together a dashboard of over 50 killer Android apps that are must haves through its singular user interface. The apps are in the categories of digital media, social networking and search. Picture an application that is similar to a Facebook newsfeed with a  functionality on steroids. Why would you like this you ask? I am going to say efficiency. It lets you update your Facebook status, change the party playlist, checkin on Foursquare and then tweet at your home girl all in the same app. That’s just for starters. With the wide array of amenities that Kinoma Play has to offer, it can be your one stop shop for accessing all kinds of important functionality that will save you time and tapping of an individual application. Check out the Kinoma dashboard if you have an Android device. I think you will be pleasantly surprised by its organization, sleek design and functionality.

Negatives: Gestures are a bit difficult when trying to tool around with app, annoying logins every now and then. Oh and it’s not for iPhone. Boo… 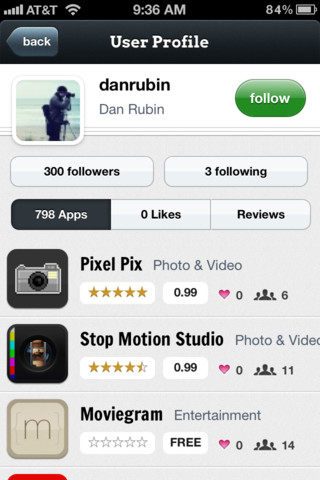 What are most common ways that we discover apps these days? In my mind it’s only in a couple ways. Word of mouth, discovering apps in the top 25 section of the app store or simply just scouring the internet for recommendations. Crosswalk solves the problem of discovering new, amazing apps inside the sea apps in the app store. With crosswalk, as long as your friends have the app downloaded as well, you can now follow them and peek inside their phone to see what they have downloaded.  In addition, how about knowing when an app is trending or when a price drop happens or even something hits that magic word we all love – FREE. Crosswalk by far solved the biggest problem for me at least with the iPhone; discovering new apps that can increase my productivity or keep me distracted while waiting at planned parenthood for that plan B pill.

Negatives: No complaints on this one. 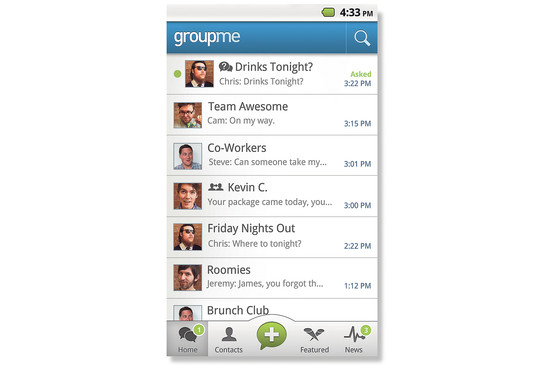 Okay, so this application wasn’t exactly brand new because it was the SXSWi hit in 2011, but let me tell you without this, our gang of social media savvy, techie socialites would not have been able to find each other. GroupMe is a group text messaging service that come true with “bells and whistles.” If you haven’t heard of group messaging just ask one of your friends with an iPhone what it is. They’ll probably laugh but the best part about GroupMe are two things; Themed apps and it’s ability for cross platform communication.

The themes are one of a kind. Let’s say you are at Lollapalooza and you don’t know that a surprise act is taking stage in the far corner of Chicagos, Grant Park. As long as you downloaded the Lolla app, the platform leverages GroupMe where news can automatically be uploaded to you and your compandres while walking around the event so you don’t miss a minute. It truly is a useful app that solves a great problem.

The cross platform feature of GroupMe is fantastic being that you and your buddies don’t even need to have the same kind of phone to interact through the app. Whether it’s a crappy blackberry, an Android or my beloved iPhone we can always be in touch seamlessly. In addition, the members of your group can indicate their location by dropping a pin in the map feature. Did I mention this is most likely your go to app when you want to order something from your pledges? (Hint Hint).

Negatives: iPhone users, turn off your notifications. If you have an ass load of people inside one group, chances are your pocket will not stop vibrating in addition to your battery being drained in no time. Also, there is a lot of useless functionality that lets you “like” your friends messages, share on Facebook and/or Twitter. I am not certain I would  use these features. Piggy backing off the “like” function be careful. The heart that shows up next to your friends message might have them questioning your sexuality.

There you have it. A first hand POV of the favorite iPhone apps of this years South By Southwest Interactive 2012. Off the bat, download Crosswalk and Zaarly. Pretty positive they are most useful during your college stint among the others mentioned. Care to agree or disagree with me? Feel free to vent in the comments!