South Park, to me, is hands down the funniest animated show on television. Every time I see a new episode, I can’t help but crack up at Cartman’s dirty mouth and outrageous storylines and think of college. On Wednesday nights, we would all gather in our living room to pass the dutchie and laugh until our stomachs hurt as we watched Mr. Jefferson floating around the screen. Even one of my roommates who “didn’t get” South Park would join us and laugh as she realized that it’s not just a silly cartoon, that it’s actually really, really funny.

South Park consistently keeps their episodes on-topic and incredibly smart, and with 14 seasons under their belt, it is a bonafide hit. It was recently annouced that the creators of South Park, Trey Parker and Matt Stone, will be spreading their talents to Broadway with “The Book of Mormon” musical out in March. Shortly after “The Book of Mormon” premieres, South Park will start it’s 15th season in April. Seven more long months we have to wait until we can see our favorite celebrities being mocked, badly animated, and torn apart on the show. South Park’s celebrity episodes are some of my favorites that have ever been aired, so to hold you over til April here is a list of the five funniest celebrity South Park moments. 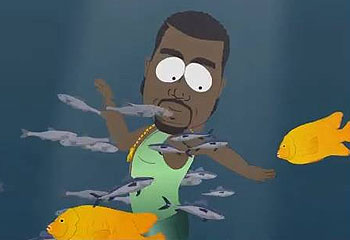 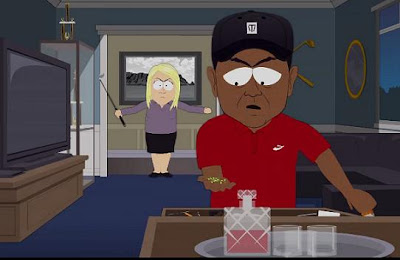 Tiger: Where the FUCK are my pills?!

Guard: Excuse me, Ms. Spears, but your kids are here and they’ve brought you a squirrel.

Britney: My boys? Really? Send them in. It’s okay. My kids are here. I feel better now. [hangs up. Stan and the others enter the room]

Kyle: We did it guys!

Stan: I told you that would work!

Britney: [walks up to them] You mean, it was just a joke? My kids ain’t here?

Kyle: Alright. Butters, go get next to her.

Butters: I ain’t doin’ it! We tricked her and it wasn’t nice!

Wendy: I don’t get it, what does she do?

Wendy: But what does she DO?

Stan: Mr. Jefferson, I have to go to school tomorrow!

Cartman: (appears at the window) Oh, son of a bitch! I knew it! What the hell are you doing, Stan? I’ll tell you what you’re doing! You’re trying to steal MY best friend!

Stan: He just showed up here.

Cartman: Remember, Mr. Jefferson? You said we were best friends.

Whoever said cartoons were only for kids, sure as hell didn’t watch South Park. Let me know if you have any other favorite celeb episodes in the comments.