5 Drinking Games You’ll Love As Much As Beer Pong 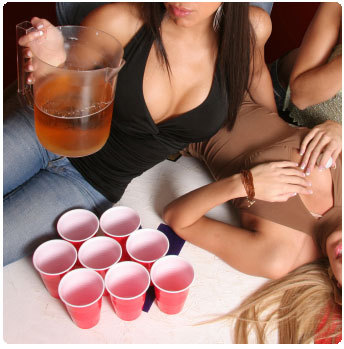 Beer Pong will always, and probably always has been the reigning champion of drinking games. Sure, sometimes it’s a pain in the ass finding all the necessary tools, not to mention ruining a perfectly good table, but something about the simplicity, the competition, and the technical creativity has made it a national past-time. Beer Pong is fine the way it is, but get ready to expand your horizons. There are dozens of drinking games out there, and as it hard as it is to believe, I think some of them are even better. Fall semester means a new start, so check out the 5 drinking games I listed below and you may never play Beer Pong again. Eh, probably not, but they’re fun and they’ll get you drunk. Promise. 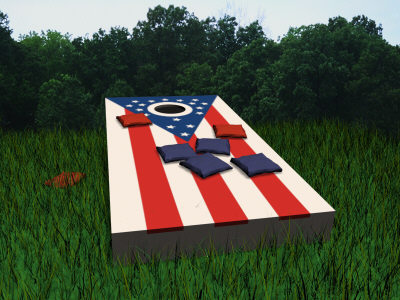 You may have heard of this one already and that’s why it’s the first one i’m mentioning. It also doesn’t necessarily need to be a drinking game, but it’s perfect for a backyard party or a tailgate, so i’m taking the initiative and making it one. Basically, each team has an inclined plank with a hole in the top-center of it. You’re gonna have to buy a set, but they’re relatively cheap and well worth it. On your turn, you try to land three bean-bags in the hole, or rest them on top of the board. If it lands (and stays) on the board, it’s 1 point. If it goes in the hole, it’s 3. Each player throws their bags and then the difference between their scores goes to the player with more points. In other words, if you get 3 and your opponent gets 2, you get 1 point. First to 21 wins, and you have to win by 2.

The drinking aspect. After every turn, the loser matches the amount of points scored with seconds chugging. If you lose the whole game, you have to crack a fresh beer and chug that too. If you win, you’ll walk out sober as a Priest, but if you lose, you’ll be drunk as a Priest who just lost a round of Corn Hole. Like Beer Pong, it’s Win-Win. 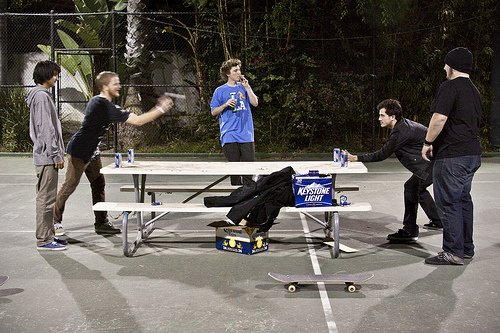 This game is interesting, mainly because it’s one of the only drinking games I know where the winner gets drunk and not the loser. All it requires is a table and Ping Pong balls (sound familiar), so it’s easy to play anywhere you’ve previously played Beer Pong. Break up into two, two-man teams, and place four beer cans on the four corners of the table. Each team takes turns attempting to hit their opponents beers dead on with the Ping Pong ball. It’s a lot harder then it sounds.

If you hit someone’s can, you have until they can retrieve the ball and slam it on the table to drink as much of your beer as possible. If your opponent has to come over to your side to retrieve the ball, you are aloud to check them as hard as you can, once, so only play with people you are least likely to get into a fight with. If you finish your beer, you’re out, in a good way, and if both members of a team finish their beers, game over. It takes a long time, and the maximum you’re drinking is one beer, but add physical activity and violence to any drinking game, and the party is on. 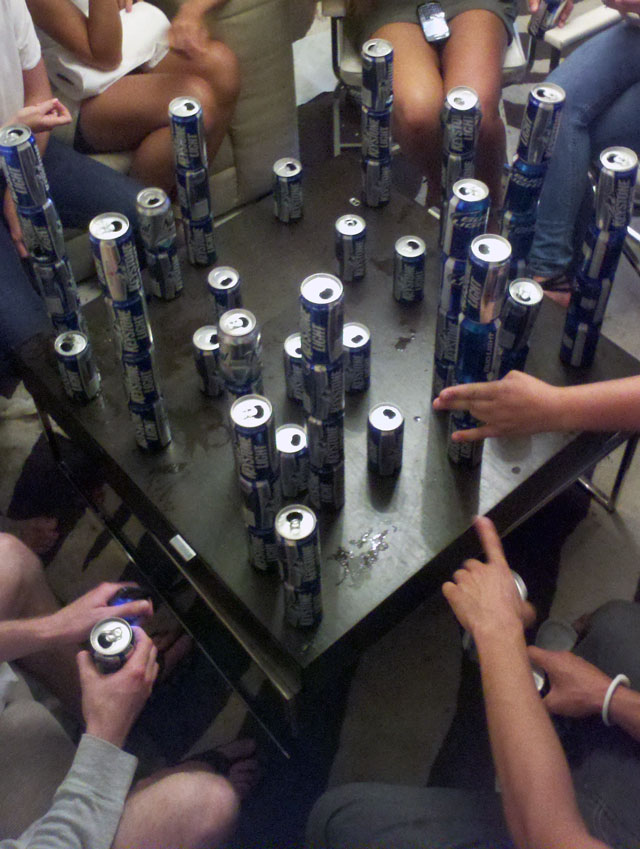 I polled the Campus Socialite office about their favorite drinking games and this one got overwhelming support. I didn’t understand it until someone physically showed it to me using Poland Spring bottles, but i’ll do my best to relay it to you fine folks. Everyone has a Beer and an empty Pint Glass sitting in front of them. The first person pours as much of their beer as they want in to their pint glass. Then with their good hand, they flick a quarter, attempt to chug their beer while the quarter is still spinning, and then place the empty pint glass, upside down, over the spinning quarter. If you fail, you have to keep going until you can perform it successfully.

Once you’re done with your beer can, you can then place it anywhere on the table as an obstacle. After a while, it gets next to impossible to do a successful spin and the real fun starts. Not particularly good at flicking quarters? This game may not be for you. Unless you’re really looking to get wasted, because trust me, you will be. 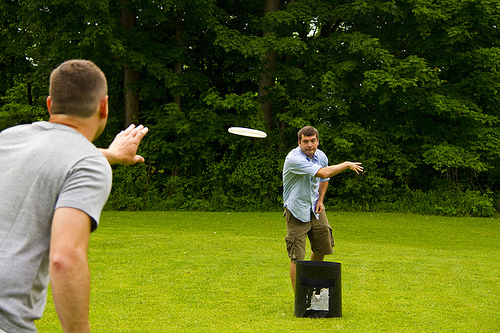 This one is one of my favorites. Once again, you’re going to have to buy a set, but they sell them at Toys R Us for next to nothing. If you’re not satisfied, i’ll buy your set. Basically you have two cans, a considerable distance away from each other, and you and your partner stand next to opposite cans. The can is open on top and has a slot in the front. When it’s your turn, you throw a frisbee at the can opposite from your position and it’s your partner’s job to assist you. Let me explain: if you’re partner deflects the frisbee into the can for you it’s 1 point, if you hit it dead on by yourself it’s 2 points, if you’re partner deflects it into the top opening it’s 3 points, and if you get it in the front slot, game fucking over.

There’s of course a couple of catches. The first one is you must have a drink in one hand at all times, and you have to drink from that drink after every turn. The great thing about this game is it’s basically open to any drinking rules you can come up with. Also, 25 points wins but you have to hit it exactly on the dot. If you go over 25 by even 1 point, it’s back to 15, and trust me, it happens a lot. Find yourself a wide enough open space (tailgate or someone’s backyard) and you’re good to go. 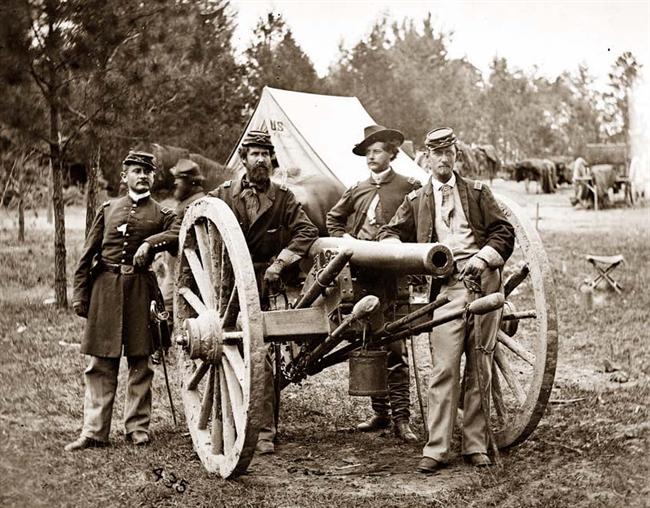 Civil War is Beer Pong turned epic. Not for the weak of heart, this game gets agressive fast, and it’s definitely not co-ed. If trash talking isn’t enough and you’re looking for something physical, Civil War is exactly what you need. The setup is easy: three man teams on either side of the table and a triangle of three cups in front of each player. You shoot Ping Pong balls like normal Beer Pong, but it’s not turn-based. You shoot, and then go get another ball, and then shoot again. There’s 6 balls in total.

But what happens when two people are going for the same ball? That’s when the Epic happens. You have to fight for those balls by any means necessary, no matter where they end up. When a person gets control of their ball, they are free to shoot it, but until that much-disputable point, it’s all out war. If all your cups get hit, you are eliminated, but you can still fuck with the other team and toss balls to your still standing team-mates. First team to eliminate then entire other team wins. This is similar to Beer-Ball in that you need to play with people who aren’t gonna get pissed when you tackle them to the ground for a Ping Pong ball. Real dudes can keep it friendly. Still though, expect to get angry and expect to get violent. It’s way more fun that way.

Campus Diva’s Playlist of the Week: Back to School Music