7 Things You Should Know Before Wrestling…In Pudding 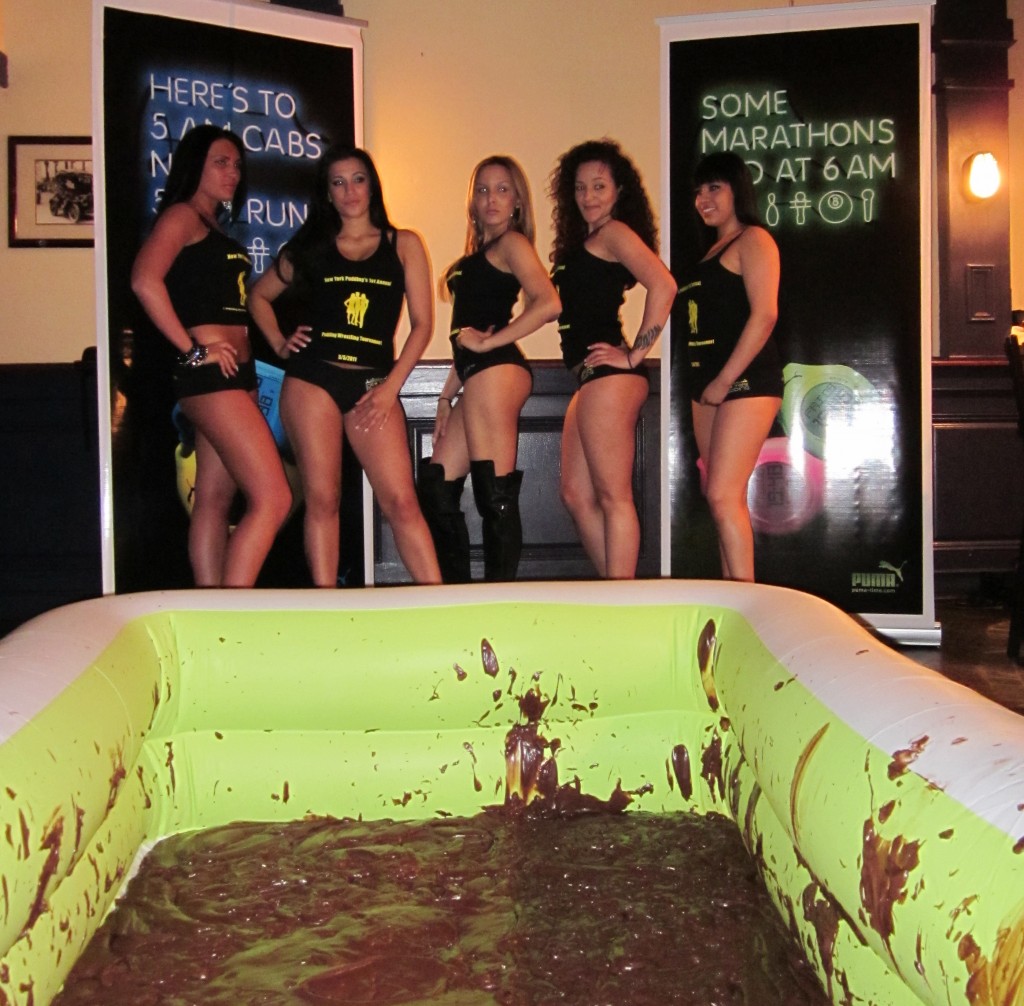 Ahh, the great sport of wrestling! Ever since Old School emblazoned the image of our boy Blue, knee deep in KY Jelly with two voluptuous and topless babes, in our minds, it has become a male fantasy to witness some form of inappropriate wrestling match. This past week, our friends over at New York Pudding orchestrated quite the spectacle at Tin Lizzies. Gallons upon gallons of Bill Cosby’s and Billy Madison’s favorite snack were unloaded into a kiddie pool, where half naked chicks were about to get very frisky with one another. To be honest, the pool resembled the result of some fat guy ingesting laxatives for days on end, but that is neither here nor there. What we really came to see on that fateful Cinco de Mayo night were these very special ladies, all of whom shared these three goals: to conquer their fears, remove their clothing, and get down and dirty in over 12 dozen Snack Packs that would have Michael Buffer’s jaw dropping and Bill Cosby screaming “Razzle Dazzle Frizzle Frazzle”…Let’s not spoil the rest of the story because the picture above already gave away too much…

While pudding wrestling sounds awesome, and no doubt it is, there are some things that any spectator or wrestler should take into consideration before they step into the ring or get up, close, and personal with pudding! 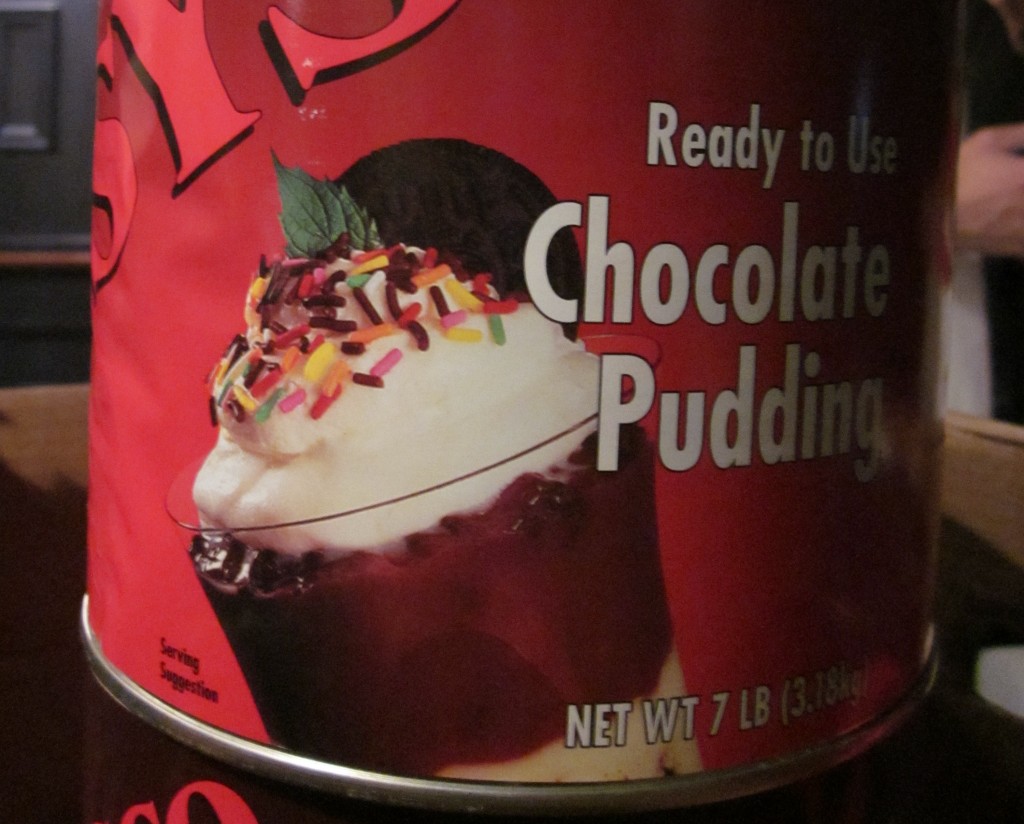 1. Do NOT Dress To Impress

Yeah it’s cool that you want to go out to the bar – maybe hit on a few lucky ladies. But let’s face it, they are probably going to turn you down because you came to watch a freaking pudding match. Do you think a girl who is looking for the perfect guy to bring home to mom and dad wants to tell them that you met at a pudding wrestling match? Nuh-uh. Get that out of your numb skull. Wear your old pair of Jnco jeans from the early 90’s, a shirt from your first color war at camp, and some sneakers that you don’t mind getting pudding on. You probably aren’t getting laid tonight, sorry.

Yeah, I said it. Two Girls, One Cup. For those of you who have been living under a rock, it’s that video where two respectable young women interact with feces in a very inappropriate manner. Now, what I am trying to convey here is that pudding wrestling can be very sexy, raunchy, and provocative all at once. However, I came to watch two partially nude girls wrestle and get slimy; I am not interested in seeing how those same girls eat pudding in a way that is, well…”off pudding” and not so tasty looking. 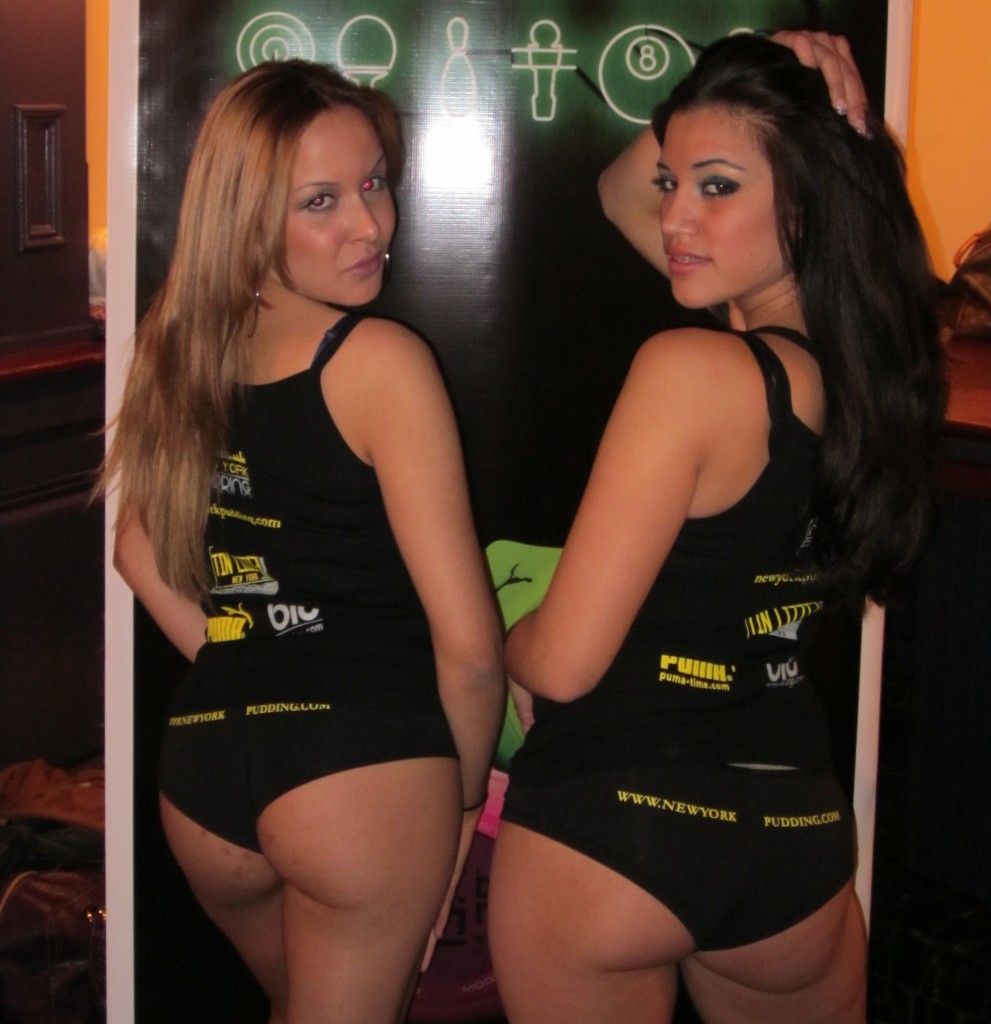 3. Embrace Your Entrance To The Ring:

I was actually the announcer for the night’s festivities. Before I got up to the microphone to introduce these fearless ladies, I made sure to take down some important information so I could get the crowd on their feet and excited up for the match. What questions did I ask?

With these answers, I could get the girls pumped on their way down to that sludge-filled pool, while also forming some level of fan attachment to each wrestler. I could have just simply said: “and the next idiot to come up and wrestle in 40-year-old pudding is some stupid girl who is about to be degraded in front of a large crowd.” But no, I thought it would help to get everyone amped for the event! Embrace your entrance, get in the zone, and get pumped. You’re about to pudding wrestle, baby! And you don’t even need a spoon.

4. The Stench of Pudding Lingers for at Least the Next 48 Hours

Okay, so you made the decision to wrestle in pudding. Great call! You should know that with great power comes great responsibility. Yes, I am relating Peter Parker to pudding wrestling. Once you enter that ring it’s time to have fun! However, no one said that you were going to smell like Aqua Di Gio directly after you physically engage another human being in a pool of slimy chocolate treats. You’re going to reek like pudding from sunrise to sunset, for at least the next couple of days. Have your detergents ready: not only for your clothes, but also for your bedsheets. Also, have some considerably powerful body wash that can mask your stench for a few hours. I am not telling you that this is the answer to your problems, but it should cover up that stinky chocolate smell for at least part of the day. 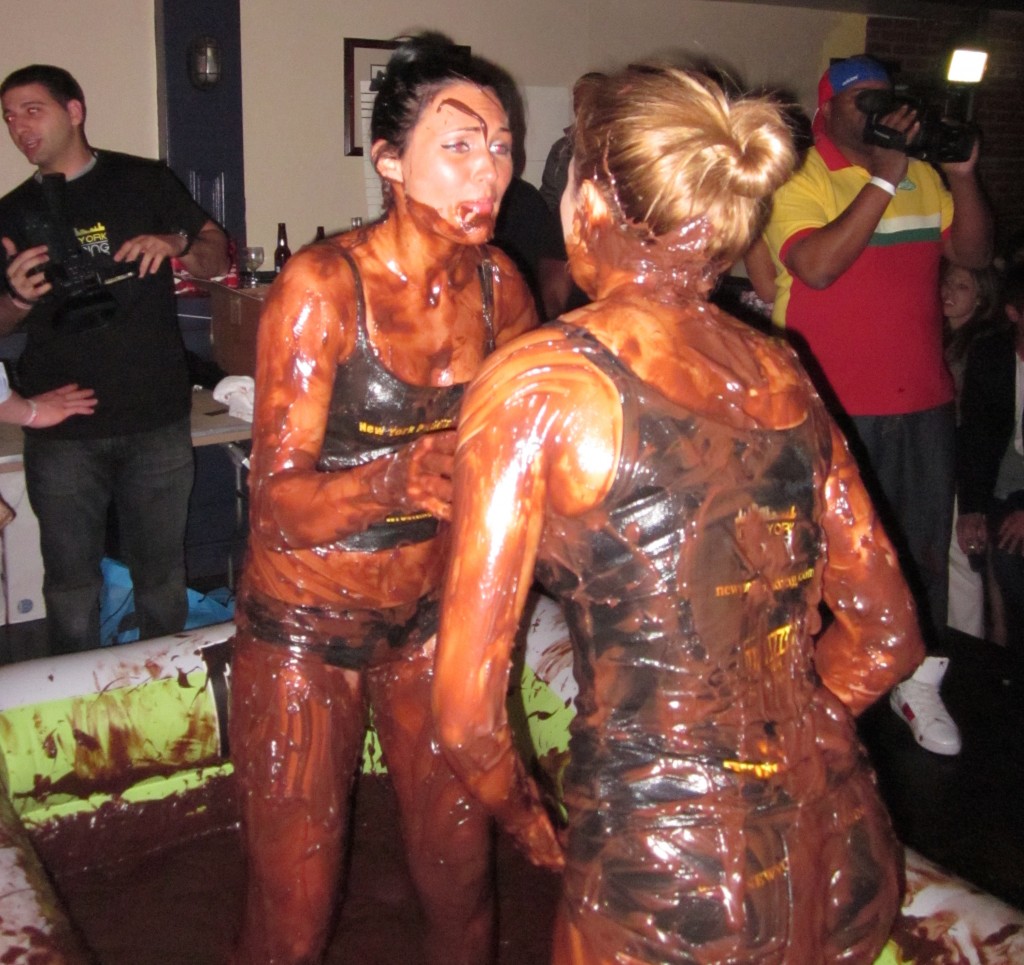 5. If You Start Making Out With Your Opponent, No One Is Going To Stop You

It’s a well known fact that there is a strong correlation between sex and violence, so if there is nip slip mid-match and you begin to get strong sexual urges, I say go for it. Guys think about sex something like every 5 seconds, but when you add pudding and wrestling into the mix it’s more like 5 milliseconds. You just might be the next YouTube sensation!

6. Hooking Up With Wrestlers Post-Pudding Match

A little word of advice for the dudes who were entertained and totally turned on by this raunchy mess of women and snacks: Flirting with the girl who just wrestled?…Totally cool. Choosing to flirt with that same girl by cracking jokes at her expense? – You’re asking for trouble. That girl is all high on adrenaline and looking to ruin your good, clean fun by getting some of her disaster on you. My suggestion? Go with it when she gives you a big-ass pudding hug. She’ll dig your calmness. Then you can eat her face, but let it be known that you are going to get very, very messy when she pushes you into that pile of chocolate gooeyness. 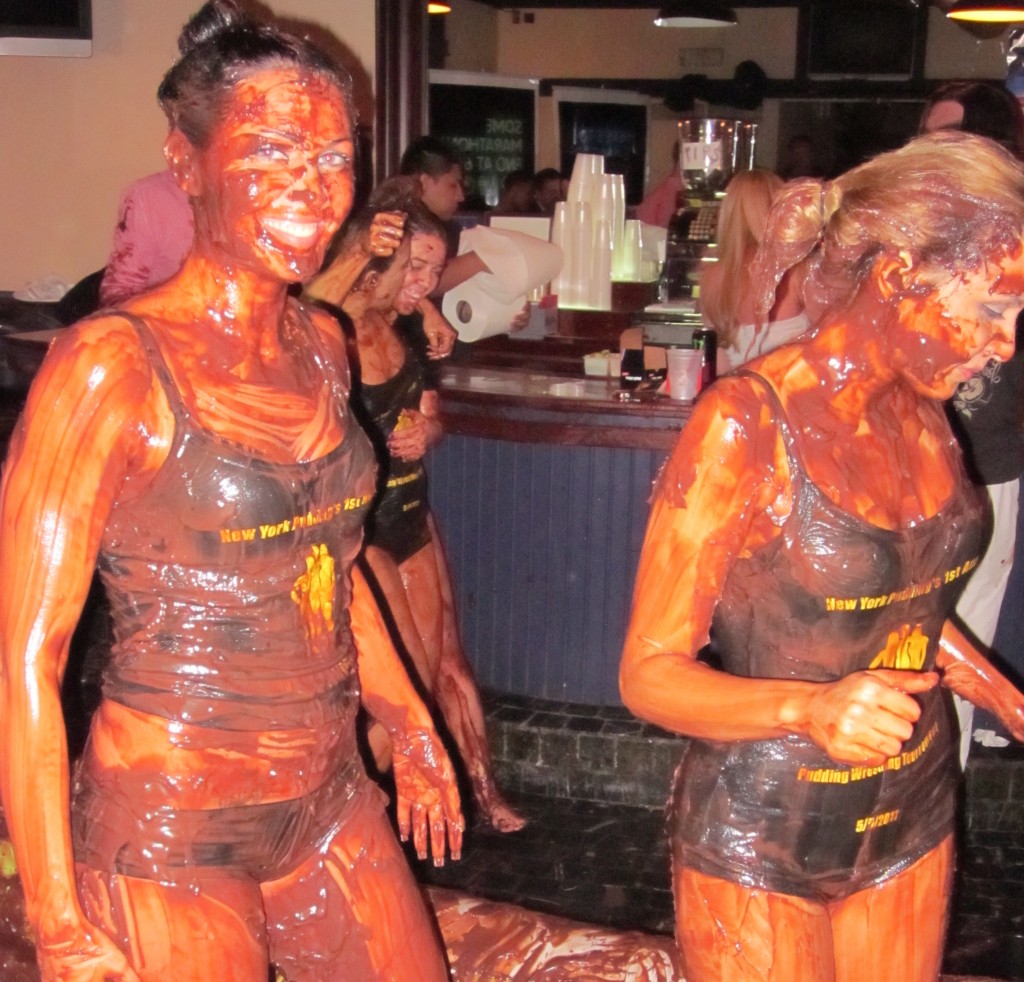 7. Be A Sponsored Pudding Wrestler!

Pudding wrestling is cool in all of its primal goodness, but it is also a fantastic way to put a sponsor on your ass and tits. Why not get paid for your one-time wrestling performance? New York Pudding sponsored each and every one of the models with Puma watches and electric Blu cigarettes. Each wrestler also had the opportunity to win either $500 or $150 depending on if they came in 1st or 2nd place. Be smart and make sure you’re sponsored, because what better product placement could a company ask for than on a fresh pair of jugs or an ass that has the traits of a bookshelf? 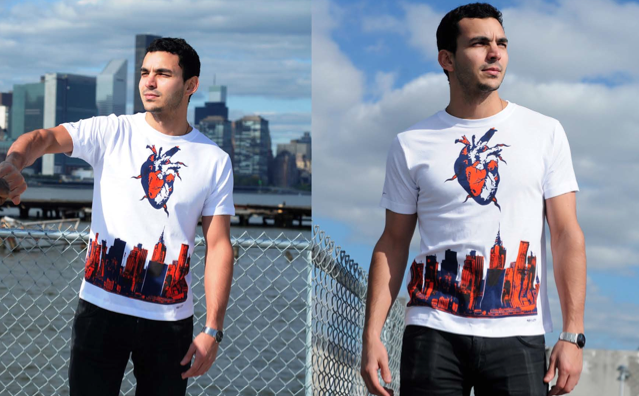 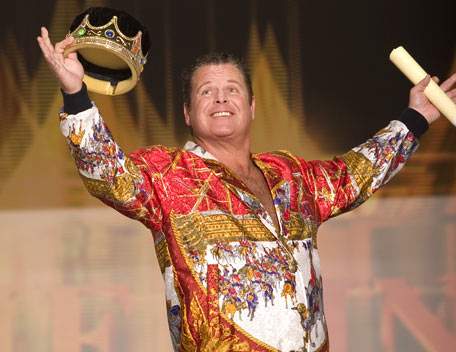 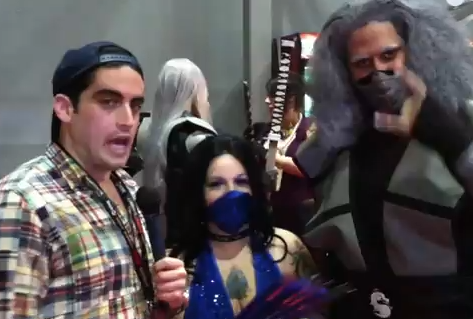 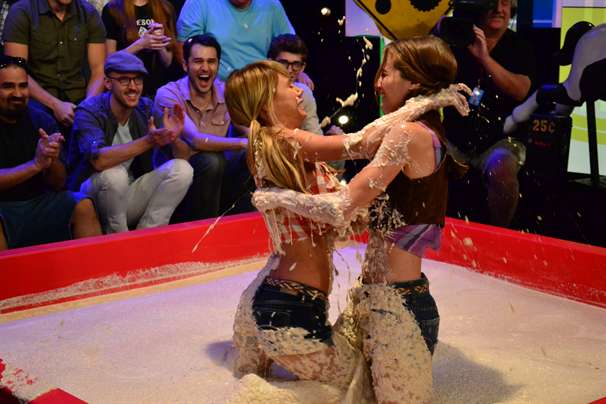