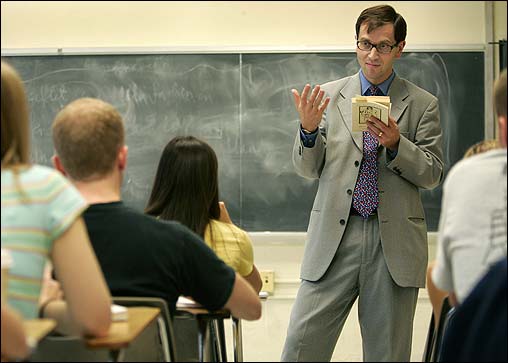 We all know that sitting in class sucks. It’s called a lecture for a reason: Some lame guy (or woman) stands at the front of the room and just talks at you for what seems like forever.You don’t listen. You don’t take notes. You don’t ask questions. The best way to pass the time is to doodle or chat on your laptop (if you’re even allowed to bring it). For your own enjoyment, here is a list of the 8 possible types of professors that you’ll find yourself not listening to when you go to class.

This professor has been teaching so long, he still refers to female students as “coeds” and has been using the same lesson plan since the 80’s. He will ramble for hours on a completely irrelevant tangent—and then stop suddenly and forget what he was saying. Every class period feels like a re-enactment of the nursing home scene at the end of The Notebook.

While you appreciate the fact that he escaped an oppressive regime in his native country to start a new life in America, listening to this professor lecture is like watching a foreign film without the subtitles or artsy sex scenes, e.g. pointless.

He probably used to be a brilliant scientist but spent so many years inhaling powerful hallucinogens in the lab that he now resembles Doc Brown from Back to the Future. He is absentminded, unpredictable and occasionally wears mismatched shoes. Pros: Entertaining lectures, especially if he yells or throws things at the students in the front row. Cons: His grading system is merciless and impossible to understand, and he writes comments on papers in a weird handwriting that looks like the Wingdings font.

College Professors: The Before Picture

It’s hard to believe that someone with a PhD wouldn’t realize that her blouse is tucked into her Hanes Her Ways, or that she’s wearing Christmas socks in October. But this professor’s appearance is screaming so loudly for a makeover that you can barely hear the lecture. You wince at the lipstick on her teeth every time she opens her mouth and mentally cut and highlight her triangular haircut when you zone out during exams. You kind of feel bad for her when you show up to her office hours and realize all the pictures on her desk are of her cat, but that doesn’t change the fact that her inside-out sweaters are a major distraction.

He makes a seating chart that mysteriously positions all the pretty girls in the front row. And something about the smiley face he writes on your papers next to “See me!” gives you a bad feeling, especially since you know he holds office hours at 9 p.m. on Friday nights.

She’s written two books, saved orphans in the Sudan and shook hands with the president—and she makes it clear that she has better things to do than teach a bunch of dumb pajama-clad twenty-somethings on a Tuesday morning.

They are way too busy writing their dissertation and proposing to their girlfriend to care about this class. Pros: No time to grade thoroughly. Everyone is all but guaranteed an A. Cons: You will run into them at the campus bars and discover the true meaning of “awkward eye contact”.

He sits cross-legged on the desk, calls everyone “man,” or “dude”, and prides himself on his ability to “relate” to his students, even though most of them mock him relentlessly behind his back. He will show a lot of YouTube videos and ask students about their weekend plans, secretly hoping for an invitation. He probably has good intentions but has seen The Dead Poets’ Society way too many times.

An Interview With Tucker Max