True or False: You have spent more time watching Cash Cab over the years than Wheel of Fortune and Jeopardy combined. This might be due to the fact that Cash Cab often runs in blocks of four or five episodes and appears throughout the day in various spots during the week; OR… it could be because Cash Cab is the defining game show of the last ten years and the most beloved Q&A style television show for a whole new generation of couch potatoes. Ben Bailey, the man who asks the questions and drives the cab, started as a standup comedian, a craft he still holds close to his heart even today. Ben joins me to talk about how he got started in comedy, how that turned into hosting game shows like Cash Cab and Who’s Still Standing on NBC and how he balances the two. Ben also shares some of the ins and outs of everybody’s favorite mobile game show, an incredible behind the scenes look at how the show works and funny stories that may or may not have made the air! A great podcast you do NOT want to miss! 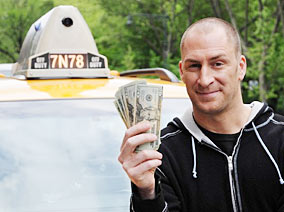 Ben will be performing at Treehouse Comedy at Mohegan Sun in CT on April 28th and you can get tickets HERE!

Follow me on twitter @SHOTOFYAGER and head over to Shot of Yager to hear ALL my interviews with other comedians like Martin Short, Lisa Lampanelli, Jim Breuer and MORE!