“I wish a guy from Brooklyn invented Google cause he wouldn’t call it Google he would call it LookItTheFuckUp!” – Dice

Andrew Dice Clay is one of the most famous comedians in the world. Anyone who remembers the golden age of comedy during the late 80’s remembers when Dice first hit the scene with his quick witted nursery rhymes containing a special dose of sexuality and vulgarity to go with his Brooklyn, NY mentality. Although Dice’s material was seen by some as offensive, racist or sexist, for the most part he took the country by storm as a fresh new act who used shock value the same way a great chef uses spices. Dice was quickly selling out venues all across the country and was the first comedian to EVER sell out Madison Square Garden two nights in a row.

A much younger audience has just been introduced to the legendary comedian as Dice showed up on HBO’s Entourage this summer for what was the show’s final season on television. Dice, who says he has always been a fan of the show, is playing a caricature of himself…playing a cartoon. He plays Andrew Dice Clay but what some people don’t understand, as Dice tells me, is that not EVERYTHING from the show is entirely based on reality, even if some of it is.

Dice is swinging through the Foxwoods Theater on September 17th and you can bet the theater will be filled with a mixture of longtime Dice supporters who have been around since the “Jack and Jill went up the hill” days and a new group of fans who have just been introduced to Dice on what a lot of people consider to be one of the cooler and more trend setting shows on television. Dice joined me to talk about his career, the comedy landscape as a whole, as well as how Entourage has affected his career as of late.

Yager: How did the role on Entourage come about?

Dice: An old friend, who is now my manager, in talking to me and finding out what I had been doing for the last fifteen years cause we hadn’t seen each other. I told him that I had bringing up my kids and I went through a very tough divorce and I found it more important to bring up my kids than to make career moves or worry about what shows I could get on. As we were talking he’s playing with his phone and he goes  “All I can tell you is Doug Ellin loves you, he thinks you’re the greatest comic in the world and he wants a meeting with you.”

Yager: Have you found that a new audience of young people are getting turned on to you because of the show?

Dice: I’ve gotta be honest, it’s becoming like…ridiculous…in a lot of ways. Number one, the awareness factor. (In New York) I would be in the street with Bruce at five in the morning and cars would still be pulling over to talk to me. People actually stop me in the street and go “I feel so bad you have to live in that apartment” and I’m like “don’t you people realize this is a TV show?!” and even if I WAS in an apartment, I grew up in an apartment! I love apartment living, what’s wrong with an apartment?

Dice: The other thing I get is “you know, I think you should just give in and go back on the cartoon” and I go “what cartoon!? This isn’t real life! This is a television show!” But I thought about it and I realized that there is so much reality TV out there today that people when they watch anything, think it’s just all real. So I started saying to people “Why don’t you go see one of Vince’s movies if it’s real? It’s a television show! What’s wrong with you!?”

Dice: It is funny, but you know, the fans have been great with me. My wife, Valerie does @MrsDiceClay as far as Twitter but now it’s time I start a Twitter account but I’m really stupid in the world of technology. It’s really hard for me to even get past the words. When people say things like Google, I go “I wish a guy from Brooklyn invented Google cause he wouldn’t call it Google he would call it LookItTheFuckUp!”

Yager: I feel like Twitter, once you do eventually get on there is perfect for your style of comedy with the 140 character limit…

Dice: When I turn on the Facebook, which I’ve now shut off, cause I just can’t deal with it anymore. Why do I need to hear from a guy that I knew, SORT OF, when I was ten years old, and this guy is like sending me messages about the times we hang out. It’s like, “we were TEN! You were a neighbor…and…I don’t remember hanging out with you at all! And even if we did hang out? Why do we need to rekindle it 40 years later?” My whole fucking life went by and I dealt without seeing “Stewie from Staten Island” and I’ve been fine with it! So why do we have to connect about it!? My God, it drives me out of my fucking mind!

Yager: Can’t wait to hear more hilarious insight like this at Foxwoods in a few weeks on September 17th. We’ll see you at the show brother, congrats on all the success!

Dice: Thank you man, we’ll see you there! 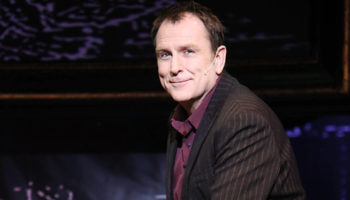