A Sit-Down with Rap Group Par-City 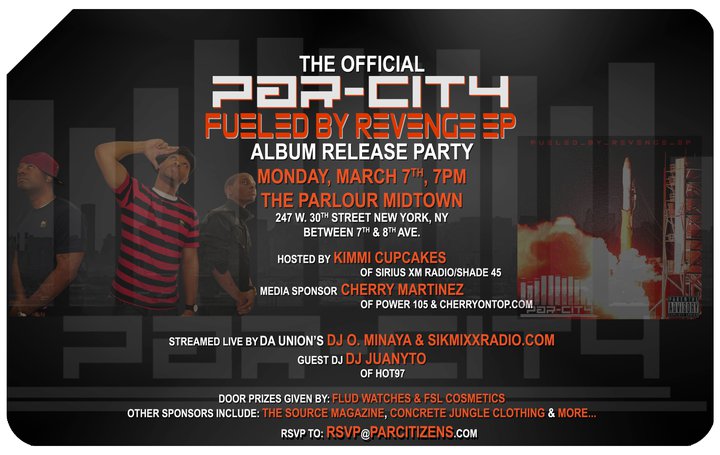 In its earlier days, and even up to several years ago, the hip hop world was filled with plenty of great rap trios from pioneers like Run DMC and Grammy award-winning Naughty by Nature, to conscious lyricists like A Tribe Called Quest and the street-loved, The Lox. If you rapped in the 80’s and 90’s, and even in the early 2000’s, there’s a good chance you were in a group. However, recently the rap group has almost vanished completely from the rap game, being replaced with individual artists who just belong to a formulated clique; which just isn’t as innate as the real thing. Nonetheless, in 2011, rap trio Par-City is here to broadcast their talents on a bigger stage in hopes of restoring the very thing that hip hop has neglected for too long. 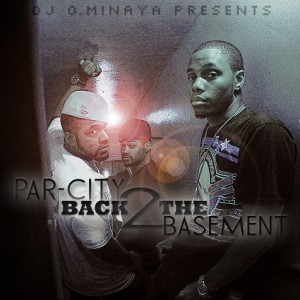 Being signed to Sounbyte Management and releasing four prior mixtapes, the latest being Back 2 the Basement, Par-city, consisting of Willy Dope, Anti, and Gif is set to release their debut EP, Fueled by Revenge, today. Despite their busy schedules, The Campus Socialite was able to chop it up with members Anti and Willy Dope to discuss briefly the group’s past, present, and future.

Aaron Pegg: So you guys are reppin’ the Bronx, the birthplace of hip hop. How did you get your start?

Willy Dope: For those who don’t know, Gif and Anti are actually blood cousins, so I’m guessing that they have known each other their whole lives (everyone laughs). Gif and I went to high school and college together. Like I tell everybody, we were always friends before this music thing started. Gif introduced me to Anti and we all realized that we had a similar passion for music. It started out just doing tracks for fun and then people started to notice take a liking to our music, and said we should pursue it and take it more seriously. So we did.

AP: How did you come up with the name Par-city and whose idea was it?

Anti: Originally we started out as another name, but the name wasn’t working out too well.

Willy Dope: Yeah, the name isn’t important (everyone laughs). But starting out, it was hard for us as new artists to get original beats, so we started to take popular industry beats, reverse them and rap over it that way. With the thought that it would sound like something completely different, completely new that no one had ever heard before. We thought it was a dope concept, so we decided to come up with a name for it, “ Par-City.” We just flipped the word “rap” around because we wanted to bring change to rap so we called it “Par.” And we put the city on there because we felt like we all do our own thing and sometimes are in our own world.

AP: That’s dope. Are any of those industry beats that you guys reversed out there, or on any previous mixtapes?

Willy Dope: Yeah, we have released it on some of our earlier, earlier, earlier mixtapes that we hope no one ever hears (everyone laughs). But I’m sure there are a couple of CDs out there somewhere.

AP: So with the success of other trio hip hop groups in the past  like The Lox, A Tribe Called Quest, Naughty by Nature, Run DMC, even, what do you guys expect to bring to the table since we don’t see that nowadays in hip hop?

Willy Dope: I think thats one of the things we can bring to the table right off the bat since you dont see it nowadays. And what makes us different is that each member in Par-city has a unique style, a different taste in hip hop. Gif is a more lyrical-knowledge type and I’m more of the comedian, more of the backpacker, while Anti is… Well I’ll let him describe his style.

Anti: I’m more laid back, I give off  more of an industry, flashy feel. This group just has a variety that everyone can like.

Willy Dope: Yeah, we are at the end of the day streets, geeks, freaks, everything. AP: So if you had to pick three words to describe the group, what would they be?

Anti: We’re all about the culture, the craft, we love what we do.

AP: I got the chance to listen to “Held Over” and “Back 2 the Basement,” which I was feelin’.  Can we expect the same feel with the album?

Anti: You’re still gonna get the same feel, but its an Ep. Its only 8 tracks, so we had to get down to business. We still got some street, party, and serious tracks. Something for everybody.

AP: So what does the album title mean, exactly?

Anti: We’ve been grinding and rhyming for so long. Many people have been doubting and hating on us, so this is our revenge; our time to show everyone that we are here. We can stand out with the best in hip hop.

Willy Dope: Gif always likes to say that the best way to get revenge is to show people how successful you can be. And we think we can accomplish this with this album.


AP: Tell me about your first single off “Fueled by Revenge,” called “Motivation.”

Willy Dope: We shot that video like two months ago and it was directed by Mills Miller and it’s actually going in rotation on BET and MTV. So look out for that. We also are promoting the second single, “Insomnia.”

AP: Can we expect any features on the album?

Anti: We worked with our fellow label-mate, Bk and Young Wit.

Willy Dope: On the production side, we have worked with  our team of in-house producers. We like to work with people who have been rocking with us since the beginning.

AP: What else do you guys have going on?

Anti: First of all we got our release partyon March 7th (today) at the Parlour Lounge in Manhattan. After that, we are getting down to business with the “Feature Fridays,” starting in the spring. We will be releasing tracks every Friday with known or unknown artists.

Willy Dope: Yeah, we actually have a track in the stash with Joe Budden. I dont want to give all the names away, but this is going to be a good look for Par-City.

Anti: After “Feature Fridays,” we will be releasing something big. Most likely a double disc mixtape. Be on the lookout for that as well. It’s going to be huge, stay tuned.

AP: Par-City, thanks so much for taking the time out to talk with us.

Anti: Thank you. You should make sure you come to the release party.

Willy Dope: Yeah, thank you for the interview. Come grab a drink at the party. There are going to be drinks, gift bags and prize giveaways. You don’t wanna miss it. It’s gonna be a great time.