Angelina Jolie Spices Up the Big Screen with Salt

It’s not summer without an action movie that defies reality in every conceivable way; be it stunts that would leave our protagonist dead after the first 20 minutes in the real world or a plot that gets increasingly more absurd as the movie progresses. But this actually isn’t a criticism. To me, this is what made Salt so enjoyable. Its like a math equation: Hot mainstream actress + explosions + twists = instant win at the box office.

Jolie plays Evelyn Salt, a CIA agent who’s happily married to her arachnologist husband. When a defector claims that she’s a Russian spy who plans on killing the president of Russia, Salt runs, intent on finding her husband. Her actions cause the CIA to think she’s guilty and also make us wonder: who is Evelyn Salt really? I know a lot of people are tired of seeing Angelina Jolie playing the gun-toting, bad-ass chick that she so often seems to be typecast as, but I will say this in her defense: she does it so well. And the fact that she’s so stunningly gorgeous doesn’t hurt much either. She throws herself into the role and carries the movie by maintaining that air of mystery that keeps us so curious of what her true identity is. 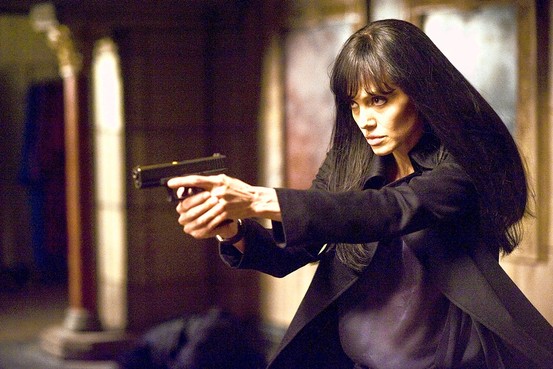 Full of surprises and jaw-dropping (although physics-defying) stunts, this summer blockbuster definitely fits the bill of what would be considered a fun night out at the movies for most viewers. Salt had enough flavor to keep me gripped and satisfied, but not enough substance to claim a spot in my memory in the years to come. But who cares?

Worst Hookups Presents: Sorry Officer, I Didn’t Know I Couldn’t Do That

Inception Spoiler, 6 Types of Girls You'll Find at a DMB Concert, 7 Ways To Pick up a Girl at a Funeral