Bartender, Can I Get a Beer…and Some Kush?

Picture this: typical Friday night with the boys, chilling at your house and just watching ESPN. No one feels like going out (last night was too rough), but you guys do not just want to sit around bored as hell. A beer would be nice, but the thought of this morning’s dreaded hangover kills that idea. Instead, your buddy Jimmy says “guys, I can call the distributor!”

Now, before you say “Geoff, you just said no beer!”, what I really meant was a pot distributor. Sound absurd? Absolutely, in most states this is still highly illegal. However, what happens if you were in California? Well, my friends, we would be in luck. Think this idea is far fetched?  Check this article that was published over the weekend by the AP: http://www.msnbc.msn.com/id/31981559/ns/us_news-life/

Not only is this happening, it is becoming common. Now, it should be noted that marijuana (pot, weed, cannibus, whatever have you) is still illegal for basic consumption. However, medical marijuana has been taking over more and more of the U.S., as states start to ease back on their penalties for marijuana. As a citizen of Massachusetts, this last November I voted to decriminalize the drug in the state. Currently, there are 14 states with some sort of de-criminalization laws: Alaska, California, Colorado, Maine, Massachusetts, Michigan, Minnesota, Mississippi, Nebraska, Nevada, New York, North Carolina, Ohio, and Oregon.

Of all these, California is the most widely known. Tales of dispensaries selling high-grade marijuana are nothing new for California, and now, this issue is becoming a central point of economic recovery. Push aside your convictions for marijuana (good or bad) for one second, and take a look at some simple facts. Marijuana is the #1 consumed illegal substance in the country. This money being used and distributed throughout the community are not going back to the government, they are being shipped, eventually, either into new crops, or out of the country.

Do you realize the tax money that the government could create if the U.S. were to legalize marijuana? In 2004, Jeffery Miron wrote a report to Congress about the amount of money that could be generated from legalizing pot in the U.S. His numbers? If the drug was taxed like normal goods, two billion dollars a year, while if it was taxed like tobacco and alcohol, over seven billion. Seven, billion, dollars. In California, marijuana is the largest crop grown. Authorities seized over 17 billion dollars worth of it last year alone in California, easily dwarfing all other grown products in value. In Oakland, CA, today, town leaders are voting on whether or not to tax the four distributors of marijuana in the city. City auditors have predicted these four companies will make 17 million dollars profit this year. While a far cry from answering the cities budget issues, the tax on marijuana alone could net the city over 300 thousand dollars towards the deficit.
The answers for legalizing pot are still a long way off. While California does support medical marijuana, state officials still point out that they are bound by federal law in the banning of non-medicinal marijuana. While reports exist showing that marijuana is less harmful than alcohol (go ahead, look at CDC records, not ONE recorded marijuana overdose in its history), the stigma about marijuana still exists. And while we, and even our parents, might not find it a big deal, what are the problems with exposing it to children?

Could you imagine, going to class one day, and your professor telling you “guys, I’m going home today, I got too high before class”. Or better yet, a Public Saftey officer at your school asks you for a light, only to spark up a nice Dutchmaster that no longer has the (wood) tobacco in it?

For the average college student, legal marijuana simply takes the hassle out of trying to get high. For the economy, pot could be an important stimulus, and for our parents, it just means less money to spend on bail and a lawyer for having a joint on a night that a dickhead cop decides to bust you.

I’ll check back in later this week with the results from Oakland, along with some other notes and news about the legalization process. For now, just take a look at this iPhone application, I’m sure it will help you find what you need: http://www.salem-news.com/articles/july172009/pot_phone_app_7-17-09.php

Hotseat: The Creator of Facebook's Most Annoying App Explains Himself

Sneaker of the Week: Air Jordan I 60+ Bulls vs. Celtics Package 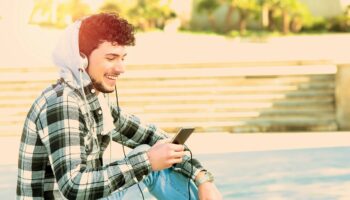