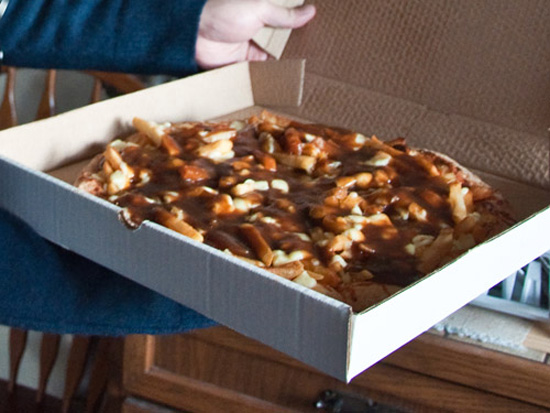 Grease, fat, and sugar – What better way to end a night of drinking then munching out on these cardiac favorites? All over the nation students are downing late meals, whether it be at the corner pizza place, hitting the dorm vending machines, or making some late night grilled cheese…mmmmmmm grilled cheese. But there are late night food paradises that a handful of lucky students have the privilege of hitting up after a night of cheap beer and belting out Bon Jovi’s Greatest Hits. These meals are not for the faint of heart and should never be consumed on a sober stomach, enjoy. 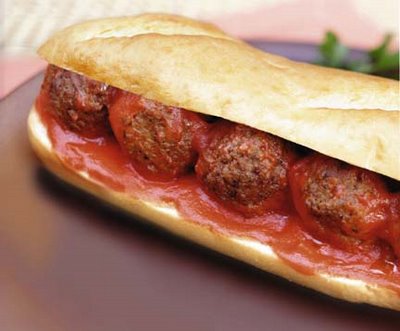 12. Pepe’s Meatball Sub – Binghamton University. A man that many have mistaken for super Mario provides his own version of soul food to the students in Binghamton. What can only be described as a room off the street, Pepe’s definitely has the feel of a late night munchies spot. You will order a meatball sub and you will like it. Stirring a ginormous pot of meatballs with some secret ingredients that dreams are made of, this late night sandwich fills you up and soaks up all those tequila shots. At $2.50 a sub even the poorest of college kids cannot resist Pepe’s scrumptious meatballs. Mama Mia that’s one spicy meat-aball! 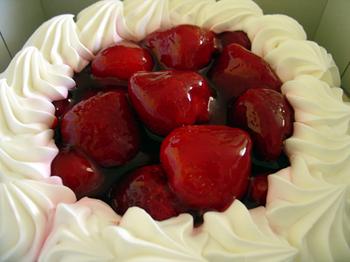 11. Anna Millers Strawberry Pie-  Hawaii University I know what your thinking, fresh strawberry pie, really? Where’s the grease, where’s the extra cheese, and nothing deep-fried? Lets just put it this way: Jimbo from American Pie would have never even thought of penetrating this slice of heaven, but instead would have munched away and probably would have laid pipe with Nadia instead of the ginger band chick with his new and improved oral skills. The pie starts with a rich layer of incredible crust combined with custard, which alone would make a pretty good slice of pie. I’m not sure where they get these strawberries from but these things are unlike anything you’ll get from your local supermarket. Piled high with a sweet strawberry sauce this slice proves that pie can be labeled a late night snack. This legendary dessert has been known to turn mainland visitors into local sunglass vendors chillin’ on the beach waiting to refuel with the perfect slice of pie (it’s in Hawaii!). Anna Millers’s 24 Hour Restaurant adds to the late night atmosphere with their waitresses dressed like hot French maids. The slice of pie will run you $3 and change but with a meal a pie slice is only $0.99…you wouldn’t find that at the dollar store. 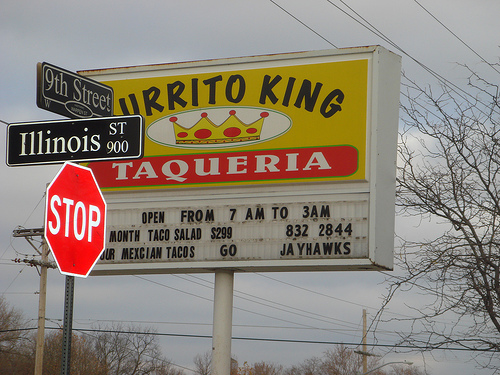 10. Burrito King- University of Kansas How can any late night munchie list be complete without having the always popular south of the border meal: A burrito. A paradise for Burrito lovers ,the Burrito King proves that late night Mexican food can be cheap and delicious at the same time. The giant 2 lb burrito for $3.50 is loaded with all your favorite fillings: Beans, lettuce, tomato, sour cream, cheese, hot sauce and your choice of steak or chicken. Though you probably get a nice reminder from your stomach that you devoured this beast in the morning, it’s definitely worth the price. The King is open from 7 AM-3 AM on Illinois St… now that’s dedication. 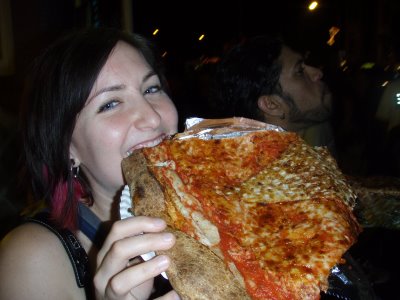 9. Jumbo Slice – Georgetown/American University. The name says it all for this one….JUMBO. This mega slice of pizza, which is actually bigger than your head, maybe your upper body as well, is a slice of perfection at 3 AM in the nation’s capital. For students in the Adams Morgan neighborhood there is no better way to end the night than with this giant slice of pizza. Greasy, cheesy, cheap…what other thing could you possibly look for in a late night snack? I’m pretty sure it is a requirement to be hammered in order to purchase this bad boy, because sober individuals wouldn’t stand a chance to finish it. Make sure you save $5 after the bar for this slice and grab plenty of napkins, you’ll need them. 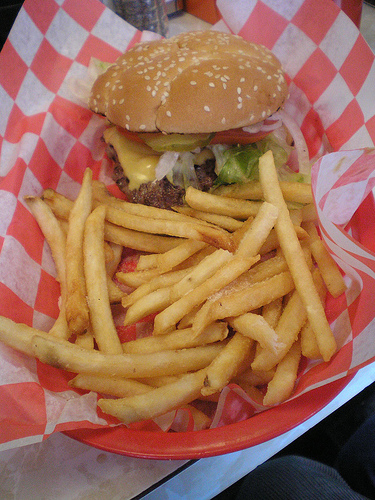 8. The Duane Purvis All-American – Purdue. The DPAA is loaded with Protein hits…gym rats this burger is calling your name after all those Jagerbombs and fist-pumping. Named after Purdue’s All-American fullback from their undefeated 1932 football team, the average burger gets kicked up a notch with a healthy serving of peanut butter. A sirloin patty with lettuce, tomato, pickles, onions and peanut butter keeps Boilermaker fans happy at all hours of the night. Along with a heaping portion of fries, the DPAA is a classic late night meal with a familiar condiment. You can grab one at the Triple XXX Family Restaurant that is open 24 hours; No this isn’t a strip club ,but it does take the always-delicious bacon cheeseburger and “enhance it” with everyone’s childhood favorite peanut butter. 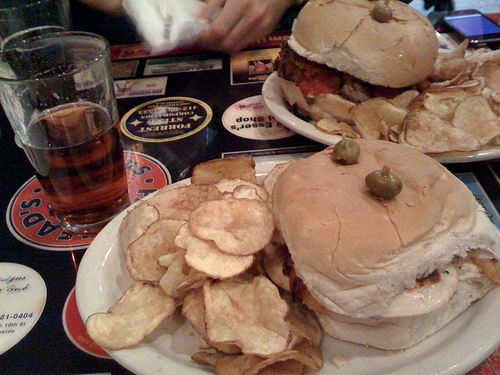 7. The South Side Slope – University of Pittsburgh. “Wasz Wypity Pijany Jedzą”….that’s Polish for “Your Drunk, Eat Up”, and at this UPitt eating hole called Fat Heads, the Polish Cuisine is welcomed by all. Along with a list of over 40 beers on tap, the meals will leave you full and satisfied. The go-to meal at Fat Heads is called the South Side Slope, which oddly resembles some type of Muppet baby daring you consume the beast of a meal. The sandwich contains a giant kielbasa loaded on top with fried pirogues, grilled onions and the always-popular American cheese. It also comes with a mysterious sauce called horsey (which I suggest you don’t ask what it is, just enjoy it). You can even tell your parents that you’re learning to eat foreign cuisine. 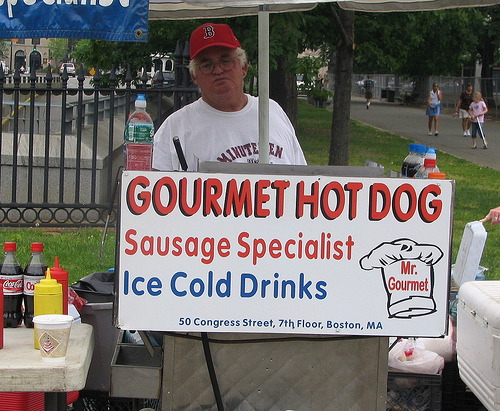 6. The Dang Dog – Clemson University. Nothing says America like a good old hot dog, so it should only be right that all intoxicated students have the opportunity to down these dogs for a late night munchie. At Clemson University the mother of all hot dogs, the Dang Dog is one of the most insane meat sticks (that’s what she said) you will find at any hour of the day. This dog is loaded with fritos, chili, and shredded or nacho cheese all for $3.50. It basically combines two of the best meals known to students, nachos and hot dogs, pure genius. Check out Dang Dogs on College Avenue open till 2:30 AM. 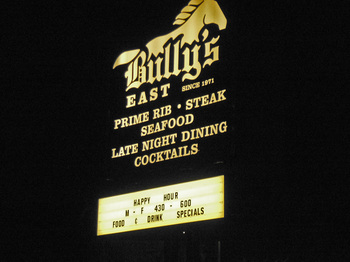 5. Bully’s Late Night Menu – University of San Diego “Campus Socialite Baller Alert.” Usually I would not put an entire menu on this list, but the opportunity to have Lobster Tails or Filet Mignon at 2 AM, straight from pounding down cheap beers at the bar, is just too much to overlook. This late night munchies spot deserves an asterisk for being considered a college dining option, just like Barry Bonds Home Run Record and will end up costing you just as much as Barry’s “wonder cream”. If your budget allows it, you could be dining on a choice of Jumbo Alaskan King Crab Legs, Australian Lobster Tails, Filet Mignon and Prime Rib. If that last jack and coke didn’t impress your booty call that night this menu will for sure. 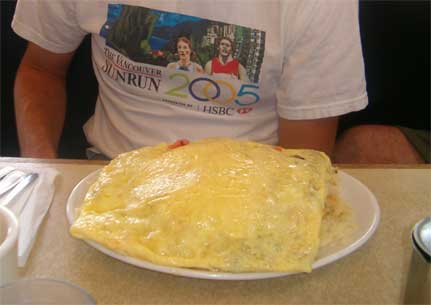 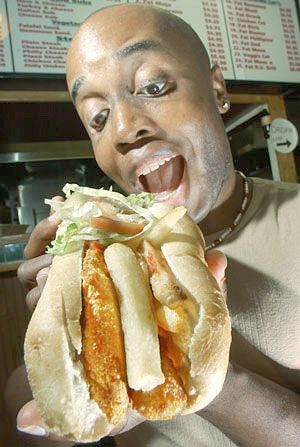 3. Fat Darrell – Rutgers University. If you have never heard of the Fat Darrell you’re missing out on a gift to mankind. This smorgousboard of late night munchies was actually created by a Rutgers student when he was trying to save money and decided to combine the ingredients into one and throw them on a bun. Darrell W. Butler convinced a vendor to put chicken fingers, mozzarella sticks, french fries, and marinara sauce on sandwich, the next ten hungry customers in line asked for the exact same order and thus a legend was born. You can grab one of these Jersey claim to fames from the Grease Trucks on College Avenue. 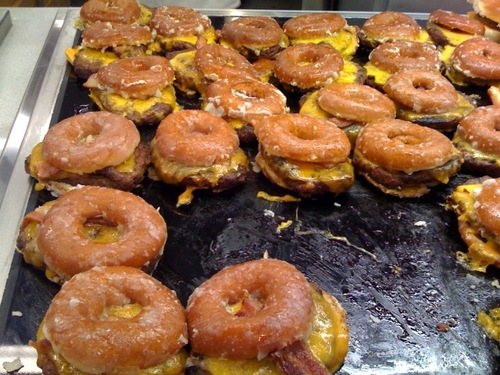 2. The Luther Burger – University of Georgia. This might be the heavy favorite in the world of late night eats. This infamous burger is supposedly named after the late singer Luther Vandross, which means there was definitely some baby making music playing when this creation was introduced to late night food junkies. The easiest way to describe this madness is a bacon cheeseburger with grilled glazed Krispy Kreme donuts replacing the standard bun. Containing over 1000 calories, this burger will surely put you to bed and down for the count. I’m pretty sure this is the last meal bears eat before they go into hibernation for winter. The original home of this was a spot called Mulligan’s Bar, which has closed down, but the Luther Burger lives on in surrounding restaurants. 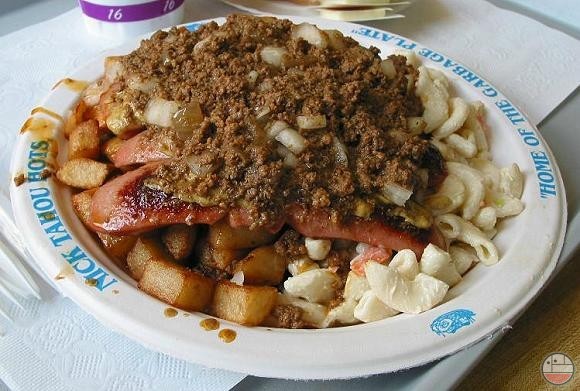 1. Garbage Plate – The University Of Rochester. Aliens, big foot, chugging a gallon of milk, real life lesbians that are hot like the ones in porn – all legends…but in upstate New York a legend becomes a reality. That’s right, I’m talking about the myth of the Garbage Plate. I have consumed this monstrous AM meal and can say I will never be the same again. By far, this is the holy grail of drunk late night food considering no sober person in their right mind would have a chance to put one of these babies down. It all starts with the center piece of the dish: Either cheeseburger, hamburger, hot dog, White Hot (poor man’s hot dog made of less desirable meat, I honestly didn’t know there was such thing possible as a poor man’s hot dog…apparently I have been ballin’ out every summer since I was 5 eating the rich man’s frankfurters), Italian sausage, chicken tenders, fried fish, fried ham, grilled cheese or eggs. Next comes the choice of sides of home fries, french fries, baked beans or mac salad. Then the final layer of goodness with toppings of mustard, onions, ketchup, or the famous hot sauce, which is basically taco meat. This triple layer beast will put you to sleep and will keep you asleep for a good 36 hours. If you dare to step up to the garbage plate you can order them up at Steve T’s: It is opened 24 hours a day, but peak times for the restaurant are usually after 2 AM on weekends when the bars close….what a shocker.