It’s a question that’s often heard after someone takes a sip of Samuel Adams Utopias; it’s often accompanied by a disbelieving shake of the head.

Beer has one of those tastes that most people think they can identify, but most have probably never tasted a brew like Utopias. It’s made using the basic brewers’ arsenal – hops, malt, yeast, water – but at 27 percent alcohol by volume (called ABV in the industry). With flavors that call to mind a cognac or a fine sherry, this is a beer taken to the extremes of flavor and alcohol content.“Utopias is a reminder of how wonderful the range is of what beer can be,” says Jim Koch, founder and owner of Boston Beer Company, which makes Samuel Adams beers.

The silky, brandy-colored drink is a blend of liquids that have been brewed over the last 13 years and then aged in various woods, including bourbon casks. It’s finished in sherry and Madeira casks.

Samuel Adams Utopias – A Beer (Literally) Like No Other… from French Oak TV on Vimeo.

“People are mistaking it for a spirit,” says Tim Calderara, a writer for the industry paper Yankee Brew News.

Koch chose the name Utopias because he felt the definition of “utopia” – an ideal place or state – reflected what he was trying to accomplish with his brew. It has a complex combination of flavors – vanilla, maple, honey, creamy toffee – and a hot alcohol bite very much like a cognac (which is very welcome in this gelid weather.)

This is the fourth time Samuel Adams has released a vintage of Utopias, and the 2007 vintage has its own glass, specially designed by Georg Riedel of the Riedel glassware company. A sleek snifter sits on a solid half-moon base; the bowl curves out at the top, in order to deposit the liquid at the tip of the tongue, so the taster gets the sweetness before the alcohol bite hits the palate. Having a special glass is “part of the idea of bringing dignity and respect to the extreme end of beer,” Koch says.

The bottle is specially designed, too. Shaped like an old-fashioned brew kettle, it’s ceramic with a metallic coating, and looks as if Barbara Eden of “I Dream of Jeannie” could pop out of it at any moment. Calderara says he’s seen empty bottles from previous vintages for sale online at breweriana sites for over $100.

Utopias’s lineage can be traced to the beginning of the extreme beer movement. Back in the early 1990s, when skateboarders and snowboarders were hurtling the world of sports toward extremes, Koch and company created Triple Bock. At 17.5 percent alcohol by volume, it was the strongest beer ever brewed.

“As we got into the 16 or 17 percent range, something transformative happened,” Koch explains. “There were flavors I had never tasted before.” He was inspired by the X Games phenomenon and started referring to the brew as “extreme beer”.

Throughout the late ’90s and early ’00s, the Dogfish Head brewery in Maryland engaged Samuel Adams in an alcohol-content arms race, making a couple of beers that passed the 17 percent ABV mark. Utopias put Sam Adams on top in the bibulous battle.

Extreme beer is not just a matter of alcohol content. Brewers have gone in different directions to push the limits of what a beer is. Some have added mass quantities of hops, creating monster beers with International Bittering Unit measurements (the measure of how bitter a beer is) that have broken the 100 mark. An American lager like Budweiser has an IBU of about 12. Other brewers have taken beer to extremes by adding unconventional ingredients, such as heather, or by aging their brews in bourbon and wine barrels.

The release of Utopias, which retails for about $130 per 24-ounce bottle, is a major event in the beer world. It routinely sells out (“If we could get more, we could sell more,” says Wes Narron, manager of the Wine Gallery in Brookline), but with only 12,000 bottles produced, “Sam Adams isn’t going to rise or fall on how much Utopias we sell,” says Koch.

He sees it as a labor of love. “We wanted to make something that created a wow moment,” Koch says. 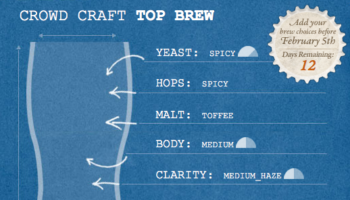