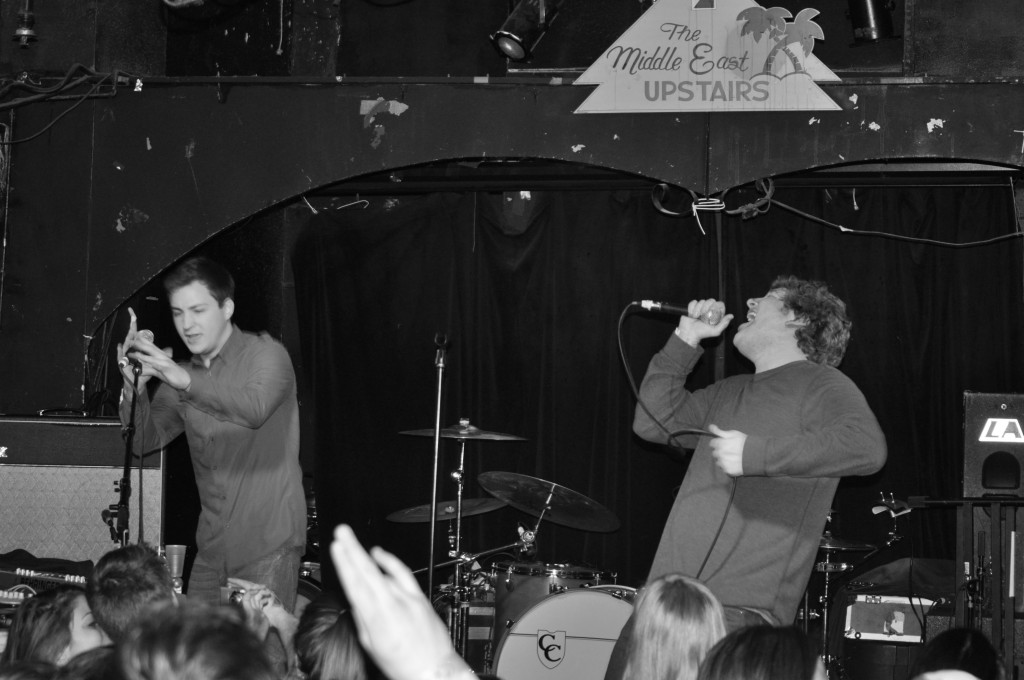 Despite the snowpacalypse that has crippled New England, hundreds of college kids packed out The Middle East in Cambridge, Massachusetts this past weekend to see All Out throw down a killer live performance. The Campus Socialite was lucky enough to catch up with Matt McCormick and Joe Skutnik of All Out after their set. We discussed everything from ex girlfriends to Lady Gaga to their new mixtape. Check out the interview after the jump. 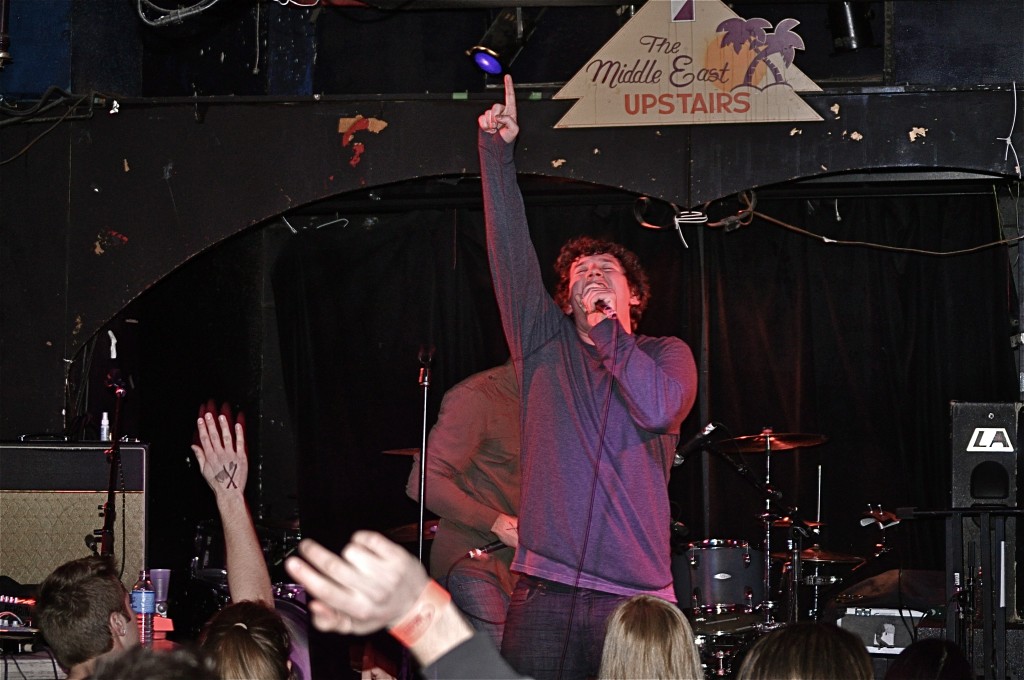 Julian Patterson: How did you guys get together to form All Out?

Matt: We got together two and half years ago. Joe had some beats…

Joe: Yeah, I had a rock project going on with a little bit of rap in there. I also had some beats I was working on. I said to Matt, ‘I’ve got a hook for you to sing. Why don’t you throw it down and see what happens?’

Matt: And that was our first single: “Time Bomb.” 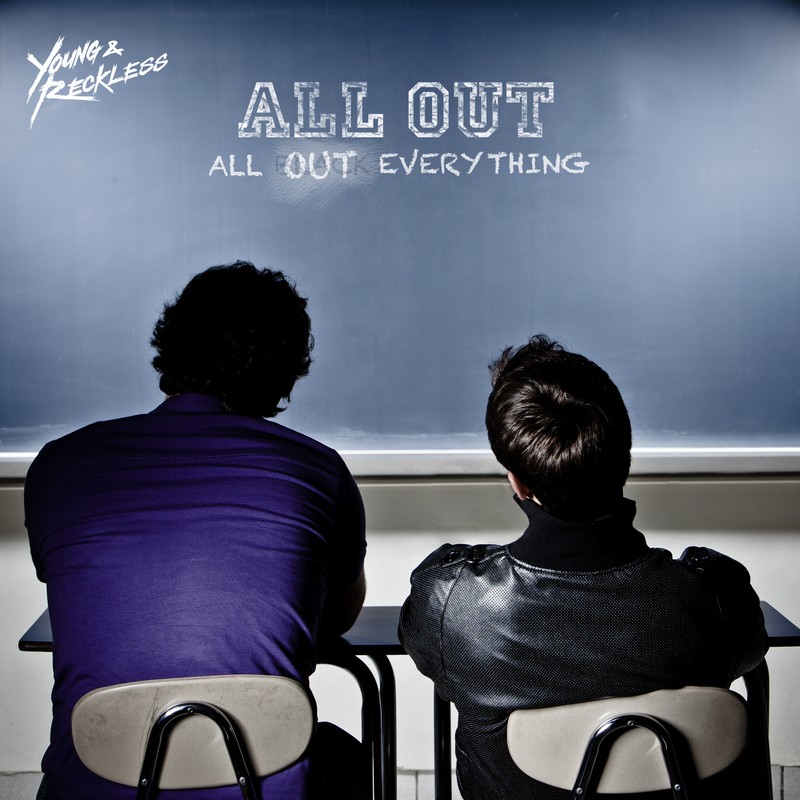 JP: Okay. So fast forward about two years and you guys drop a crazy mixtape entitled All Out Everything. What was the response like, especially on the blogs and various websites?

M: The response to the mixtape has been great. We got the idea from Dan Wesiman, our manager, to release free music. A lot of artists are doing it these days because the market is changing so much. The music business in general is changing. It’s so single driven that at this point in our career it’s just better to release music not for the purpose of making money, but to get as many people listening as possible. Once people get into it, we’ll play more shows and build a solid fan base.

JP: You talk about releasing free music, so we’ll get into the music on the mixtape. “Lights” just recently reached 500,000 hits on YouTube and a couple months back it was named the #17 pop song of 2010 on iTunes. You guys are a couple kids from Massachusetts and here you are with a song on the iTunes charts above Lady Gaga, Bruno Mars, and a lot of other people who are getting radio play…

M: It’s an honor to be included on a list like that. I guess an editor really liked us. As for YouTube is concerned, that’s where a lot of our new fans have come from. And a quick shout out to all the guys who made the video: Studio T and everybody at Tufts that we worked with. It was an awesome experience.

JP: Obviously “Lights” is one of many party tracks you guys have, but I want to get into a song you put out that is a little more personal called “So the Whole World Knows.” I’m assuming it’s about a girl who was once near and dear to your heart. Spill some details for our readers.

M: It’s a stripped down track with very little production on it.

J: We threw a piano track together, sat down, and thought about what we wanted to say.

M: It was weird and we don’t really tell people this, but when we first started writing we figured it was going to be kind of a ballad-y song. We started writing the chorus about this girl in one of our lives. After some things happened between one of us and the girl in question, we decided to make it a harsher and sadder song.

J: Overall, we really wanted to get it across that we don’t have a certain process carved out when we approach a song.

JP: What’s next for All Out? Can we expect new material or viral videos?

M: He lives in his studio.

J: Yes, I literally live in my studio. There’s my equipment and there’s my bed. When I wake up, I’m in my studio. So yeah, we’re always working on new records, moving forward, and doing whatever we can keep the momentum going.

M: So definitely expect new music. We won’t be making any more viral videos anytime soon. We’ve already done three for All Out Everything, which you can check out on YouTube. But, we’re always looking to take things to the next level, especially playing college shows, which is always fun. That’s how our music spreads.

J: Exactly. A lot of college kids and high school kids hear our music or hear about our music and download the mixtape on the internet. It’s a great way to gain new fans. 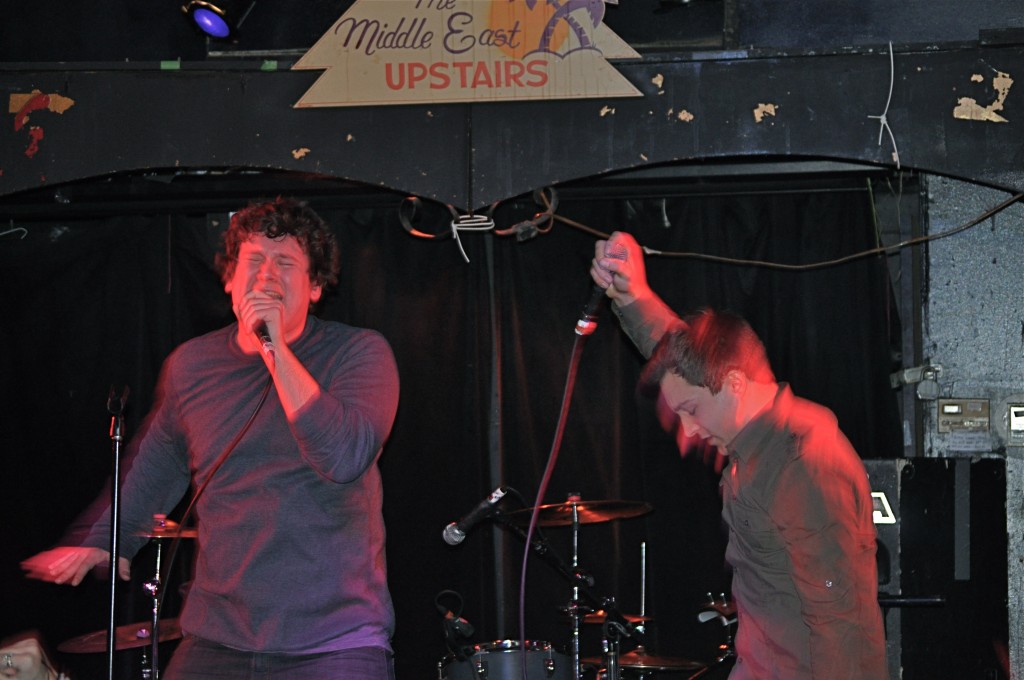 J: First of all, I think it’s an honor that people are comparing us to those artists. Those guys are huge. It means a lot. When we were first starting out, we were more focused on the direction we wanted to go in. But, as we put out the mixtape and put out more tracks, we learned about the direction we were naturally going in.

M: It’s more about what feels good. We’ve settled into our sound. And to be honest, as far as those comparisons go, I feel like it’s such a new sub genre of pop. I wouldn’t say 3Oh!3 started it, but they definitely made it popular— The Ready Set and Ke$ha as well. I feel like those groups that are very pop-electronic with a hint hip hop will be a new genre of music in a couple years. It won’t be, ‘You guys sound like 3Oh!3.’ It will be, ‘You guys sound like [this] genre of music.’

JP: For our readers’ reference, where can we find you and your music online—Facebook, Twitter, MySpace, and pretty much any social media platform out there?

M: You can find us everywhere. Pretty much any social media network. You can even hit us up at alloutma@gmail.com.

Check out All Out on Facebook, Twitter, YouTube, MySpace, as well as The Campus Socialite’s Top 20 Mixtapes of 2010. Be sure to download All Out Everything if you haven’t already. Look out for All Out on tour in a city near you. For management and concert booking inquiries contact boss@elitaste.com and jesse@nueagency.com respectively.