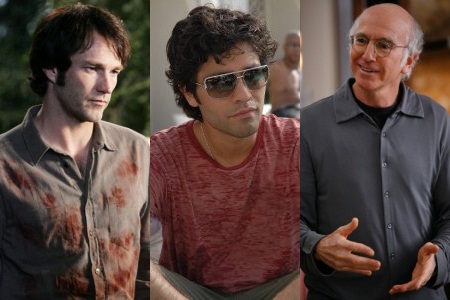 Before college, summer was awesome. No school, no responsibility, just hanging out at the pool and enjoying the nice weather. But now that you’re in college, summer sucks. You’re away from your friends, can’t find an excuse to drink six nights a week, and your parents are nagging you constantly. Lucky for you co-eds, you have something to look forward to: your favorite premium cable shows are back with brand new seasons for your viewing pleasure.

After a year and a half hiatus, “Curb Your Enthusiasm” will have it’s season eight premiere on HBO July 10. Larry David is back as himself and getting into more awkward, inappropriate situations only to come out looking like a prime asshole and general neurotic guy who has trouble censoring himself.

Season 8 will be different from previous seasons, as most of it was filmed in New York City instead of Los Angeles. After last season’s Seinfeld reunion plotline, what can Larry do to top it? Hopefully not try to go on another date with a girl in a wheelchair or become friends with a little girl. Scheduled guest stars this season include Michael J. Fox, Ricky Gervais, Ana Gasteyer, and Rosie O’ Donnell. Check out a look behind the scenes below!

HBO capitalized on the vampire craze with “True Blood,” the show about vampires and humans coexisting in Bon Temps, Louisiana. The show is based on the novels The Southern Vampire Mysteries by Charlaine Harris and season 4 will be loosely based on the fourth novel, Dead to the World. Season 4 will have 12 hour-long episodes, and the first will be titled “She’s Not There.” For a sneak peek of the first six minutes of this season check out the video below (Gary Cole is in this season!).

The boys are back for the eighth and final season of “Entourage” set to premiere on HBO July 24. Season 7 left off with Vince getting in trouble for cocaine, Ari’s wife wanting to take a break from their marriage, E getting ready for his upcoming nuptials, and Drama landing his own animated TV show.

The final season will feature 10 episodes, but Vinnie Chase fans don’t get too down just yet. There has been talk of a movie following the finale for a while now, and as long as HBO doesn’t take any tips from the “Sex and the City” sequel, long-time fans would definitely be willing to check out their favorite entourage in theaters.

Nancy Botwin returns to Showtime June 27, but she’s not selling dime bags or scheming with the Mexican drug cartel, she’s just getting out of jail. Last season left us with Andy, Shane, and Silas getting on a plane to Copenhagen to escape their hunted, on-the-run lifestyle after Shane murdered Pilar Suazo, one of Esteban’s colleagues.

Nancy stayed behind and took the blame for Pilar’s murder, leaving her family and everything she once knew behind. But season 7 begins three years in the future with Nancy getting out of the clink, and meeting up with her boys in New York City.