7 Reasons To Be Single and Mingle

5 Reasons to Be Excited to Go Back to School

If you are a member of the two thirds of the college kids starting classes this week, you are either partying in your new apartment, or finishing trying to jam everything into your car. So why should you be excited to go back to school? Here are five reasons for you to ponder… 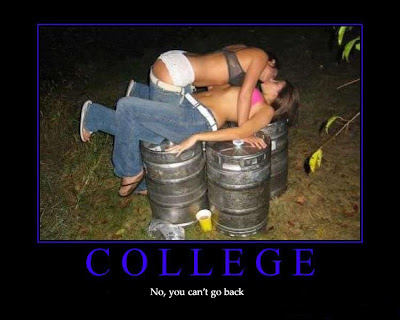 With classes starting soon, most people are making the long road trip down to school, that being said there are a couple of ways to make the trip easier and more sanitary.

Stop Being a Douche and Take Responsibility

How often do you play the blame game? Seriously. You’ve had a bad day and it’s your mom’s fault, or your boss’ fault, or your sibling’s fault, whose fault is it really? When we were kids we could get away with blaming others but it’s time that we take responsibility for our own actions. So how do you do it?

Eat Pray Love Isn't All It's Cracked Up To Be!

It’s a testament to Julia Roberts’ acting that I stayed for the whole two and a half very long hours of her new movie, Eat Pray Love. Eat Pray Love, based on the bestseller and acclaimed memoir, is Elizabeth Gilbert’s true story about how, after realizing she’s lost her zest and “appetite” for life, she decides find both herself and balance in her life by leaving everything behind and going on a year long journey through Italy, India, and Bali. While I still have yet to read the book, its a story that held a lot of interest to me. I wanted to want to live vicariously through Elizabeth; most people have probably at some point had that fantasy of just putting their old life on hold and traveling to new and exciting places, having new life-changing experiences…so at first glance it seems like the perfect movie to go to to temporarily get to live out that fantasy. But after a while, the movie started to drag to the point where I found it impossible to care about anything. More important than the plot or the locations of this story is the growth of our main character. She’s not someone whose instantly likable; in fact, some people might find her to be flaky and selfish, especially if you just look at the hard facts about the character on paper. However, where the movie managed to succeed was with the casting of the always dazzling Julia Roberts as Elizabeth Gilbert. Roberts took a character that, played the wrong way, would have come off as whiny and self-important. But Roberts brought a certain vulnerability to the role that made, at least, that one aspect of the story work. Unfortunately, there’s so much that’s misguided in the movie that even her performance cant stop it from drowning.

The Five-Step Guide to Making Your Room Pop

Whether you’re moving into a dorm or into an apartment off campus, you want to make your room different and stand out. You don’t want plain walls and have people walk into your room and want to leave right away. With that in mind, here are five things to make sure you have a killer room.

While I may understand soon-to-be Syracuse University senior Tyler Gildin better than anyone, you may all be getting to know him pretty soon. Gildin’s viral video “Nassau (County) State of Mind” is quickly getting even more hits than most New York Mets opponents and he is ready to capitalize on a spotlight larger than others he’s grown quite used to.

For over three years, the Long Island native has continually improved as an aspiring stand-up comedian. While Gildin started off performing smaller gigs on the S.U. campus, he’s taken his material (which can sometimes make Bob Saget’s look Mr. Rogers-esque) to some of New York’s most prestigious comedy clubs this summer. With a new website (conveniently titled “TylerGildin.com”) and one of the Internet’s hottest viral attractions, it’s clear he’s very serious about being a joker.

Tyler was gracious enough to give me some of his (now, exponentially more valuable) time for an exclusive Campus Socialite interview. With all of his recent YouTube success, I have a feeling it won’t be his last Q& A.

5 Things to Do at a Baseball Game

By Eric Michael (University of Miami)

So summer is drawing to a close, and everyone is beginning to pack up their bags and head back to campus.  If you haven’t had the chance to attend a baseball game this summer, there is still a little bit of time.  With that in mind here a list of five things you should do at a baseball game. It’s August. School is right around the corner… which for some means an end to a boring summer, and for others the end to a perfect summer. Either way a new scholastic year is coming up, ready or not! The question is how do you take full advantage of this brand new year?

Tequila Avion might be experiencing the best publicity any product can ever dream of. If you’ve been keeping up with the last couple episodes of Entourage, you not only know what I’m talking about, but, admit it, you’re curious for a try of this magical tequila yourself. “All I can say is, I’ve had a lot of sex, and the best has been while drinking this,” Porn star Sasha Grey says while her and Vince drunkenly praise the tequila as Turtle films them. Then Turtle, during a serious lapse in judgment, links the video to Vince’s twitter account. Bad for his image? You bet. And Shauna and Ari are pissed, especially since this incident puts Vince’s potentially big new project in serious jeopardy.

So grab your blankets and s’mores and snuggle in (outside of course) for a show you’ll never forget. The Perseid Meteor Shower peaks August 12-13 this year (approx. from 10p-5a) and should produce at least 80 meteors per hour!

But what the hell is a Perseid…?