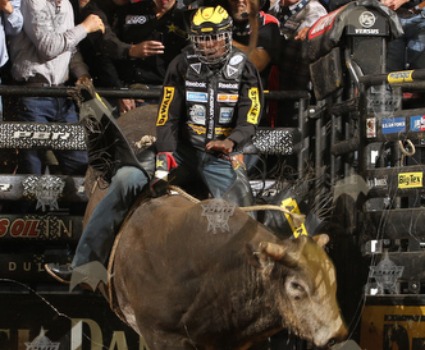 Chad Johnson is making the most of this NFL lockout.  He explored his dream of playing Major League Soccer, and now he gave professional bull riding a try.  What can we determine from Ocho Cinco’s attempts at trying out other professional sports?  Chad, stick to your day job Chad because you are no Bo Jackson.  Chad Johnson was paid $10,0o0 to appear the Lucas Oil Invitational bull riding event in Atlanta.  Not a bad pay for the amount of time he put into this job.  The challenge was that if he could last 8 seconds on a bull named “Deja Blue” he would walk away with a new Ford F-150.  We’ll as you will see below, a Ford doesn’t seem to be in Chad Johnson’s future.  If he decides to get back on the bull again in the future, I recommend he gets training from the girl in the second video.  That girl rides a bull like a damn pro, and looks good doing it.