Wednesday, WETA debuted their special effects for the upcoming film Rise of the Plant of the Apes. Some of you might have watched it stream here right at The Campus Socialite or on the Avatar Facebook page. For those of you who didn’t, let me give you a run down about what WETA’s Joe Letteri and Dan Lemmon talked about during the demonstration.

These guys are the same team that did the effects for Avatar, as well as Lord of the Rings and many other award winning films. Rise of the Apes seems to be a massive upgrade from the previous attempt at recreating the franchise that came out a while back starring Mark Wahlberg. Whereas that film relied heavily on makeup and practical effects, this new film piggybacks on the same motion capture technology that led audiences to become fascinated with James Cameron’s Avatar, as well as the character of King Kong in Peter Jackson’s reboot, and Gollum in Lord of the Rings.

The demo showed how that technology was used to turn Andy Serkis into Caesar, the lead monkey if you will, in the new Apes film. Serkis performs the same way an actor would for a normal live action film, except his facial motions and performance are used to create the image of Caesar, who of course is not a human…but an ape. Because the film centers around the close ties between humans and apes, and more specifically, how they could even potentially surpass humans when it comes to mental and physical capabilities, the filmmakers chose to have a seasoned actor like Serkis play the part, even if there is little-to-no physical resemblance to the human actor. Even with Lord of the Rings you could sort of see Serkis in the part of Gollum, at least in the face. Choosing to put so much time and effort into capturing real life emotions for the part of Caesar shows how serious the whole production and effects teams are about the realism that backs up this upcoming film. The short-but-sweet demonstration Wednesday was a great way to get audiences and fans excited for a film that otherwise might have seemed a bit stale. 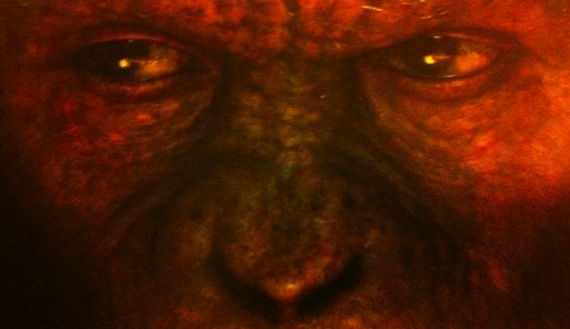 In an age where every movie or franchise gets remade 100 times, it makes me optimistic to see that countless hours of preparation and creativity are being spent to make sure that this new version of Planet of the Apes is both modern and special enough to warrant it’s creation. On Thursday, the trailer for the film debuted on iTunes and the movie looks really great, at least from a visual standpoint. When it comes to trailers however, that is about all you can ask for.

With a decent script it seems as if Rise of the Planet of the Apes could be one of the blockbuster hits of the summer, and when you throw in James Franco as the lead scientist, we could have quite the crowd pleaser on our hands. With technology breathtaking enough to capture the imaginations of a younger audience and a franchise that carries weight even with the most senior of movie goers, we could see the beginning of a franchise reboot that takes us into the new age of special effects thrillers.

Tags : Avatarlord of the ringsMoviesplanet of the apes
previous article