Delonte West just pulled ahead of Brian Scalabrine as my favorite stufftiest player in the NBA. For those who don’t know or simply need a refresher, Delonte West banged Gloria James. Gloria of course is Lebron’s mother and this occurred while West and Lebron were teammates in Cleveland. In fact, Delonte West fans can get their own T-shirt. (How many other scrubs can say they have their own T-Shirt?) 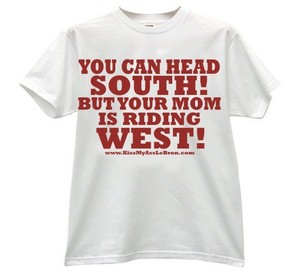 What happened last night though is the icing on the cake. Delonte for no apparent reason gives the Utah Jazz player Gordan Hayward a wet willie. It was really more like a dry willie but what professional athlete in their right mind would ever do that? West received a technical foul and a large spattering of boos from the away crowd for his actions.