We’re all guilty of using the emoticon. We’ve drunkenly done it after last call at the bar when we realize we might be going home alone, or when we realize there’s no harm in trying to get the cute guy from Stat class to come over for a late-night drink. The text that looks like: “hey..what’s up? wanna come over….. : )”.

You know what I’m talking about; the smiley face, the colon and parentheses, the random mix of symbols you get from people who have real graphics on their phone. Sometimes it’s a nice addition to a sweet text like “I love you ((smooch face))”, and sometimes it’s the creepy ; ) from that kid who won’t leave you alone.

But when is it acceptable to send smiley faces, frown faces, or kissy faces? Does it make you look like a loser, or like a sexting goddess? Here’s a few scenarios when the emoticon comes into play.

The nice smiley face emoticon at the end of a text is acceptable in certain situations. In college, a good time to use the smiley face is when you need something (notes, information about a group meeting you missed, or anything school-related). You’re most likely not that good of friends with people in your class (the whole call me and we’ll go to the bar thing  just never happens), so adding a smiley to the end of a text will let them know you’re nice and grateful for their help. Besides, even though you’ve missed most of the group meetings, you still want them to give you a good participation grade.

Too Drunk to Form Words

Any sort of emoticon is acceptable when you’ve had 12 vodka sodas and are drunk-texting your hook-up. Devil face, super smiley face, the kissy face. Any are acceptable because in the morning you won’t remember, and if you’re smart, you will have deleted all your drunk texts the night before in a drunken rage so you don’t have to deal with it the next day. Better to have the “blacked out and have no idea what you’re talking about” excuse, than to actually explain to your lab partner why you sent him a text saying “what it do baby boo” and “co4me oklver plzzzzzzzz : )”.

When You Don’t Know What to Say

The emoticon is appropriate to send to someone when you have no idea how to respond. So your boyfriend texts you that he wants to bring eight of his friends to your friends party; send him a : / face. A member of one of your groups texts you about the meeting you forgot all about and you’re at the bar; send her a sorry face. When your roommate texts you that you can’t come back to the room; an angry face or a super smiley face will do, depending on the guy.

The booty call is the place where emoticons are best suited to be. If your booty call is a friend and he sends you the smiley + kissy + “O” face smiley after the bar, you think it’s funny, not creepy. There’s always the other text gesture that signals the impending hook-up, usually involving a “…..”. That text is usually something like “Wanna come over……”, where the “…..” obviously means “have sex and then leave immediately after.” One night stands and booty calls don’t have many rules to begin with because who cares about rules when you let someone see you naked after you’ve only known them for 15 minutes. 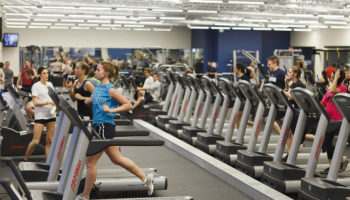 5 Ways To Stay Fit In College