From Blue to Orange, Paulus is Under Center at SU

Are you so extraordinarily talented at two different things that it is often difficult to decide which one to focus on?  Didn’t think so, don’t worry I’m not either… that is unless you count getting shitfaced and passing out with your pants still on as two separate activities, but in my experience they go hand in hand.  A select group of fortunate people commonly known as “dual sport athletes” face this dilemma every day and typically choose to settle for one option and pursue a career in that single sport.  There are, however, some rare exceptions to the rule as a handful of special athletes attempt to balance multiple sports in their lives.  A few notable examples of these Gods of the diamond, turf, or hardwood include Heisman Trophy winner Bo Jackson (baseball/football), 8-time NFL Pro Bowler Deion Sanders (baseball/football), Olympic gold medallist Jim Thorpe (baseball/basketball/football/track), and NFL Hall of Famer Jim Brown (lacrosse/football).  Hoping to turn back the clock and take a page out of alumni Jim Brown’s book, Syracuse has enlisted former Duke point guard Greg Paulus as their starting quarterback for the upcoming 2009 campaign.

Paulus won the starting quarterback job for the Orange after only a week of preseason camp.

First-year head coach Doug Marrone made the announcement Monday night with a statement through the SU sports information office.

Paulus, a former high school All-American in football and basketball at Christian Brothers Academy in Syracuse, returned to his hometown as a graduate student this summer.

Because he graduated from Duke in four years and did not redshirt, he received a waiver from the NCAA allowing him to play football at Syracuse for one season without having to sit out a year. 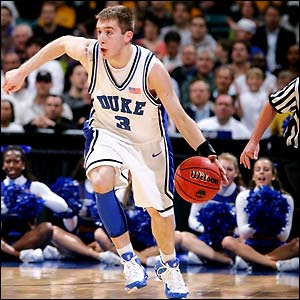 In high school, Paulus was a four-time all-state football selection and held six New York State records, including most career passing yards (11,763). He has not played competitive football since the 2004 season.

But he said Monday before the announcement that he’s shaking the rust off.

“Something is getting better each day, whether it be footwork, more accurate throws, seeing the defense, getting used to the speed,” he said prior to the announcement.

Nassib had been named the starter by Marrone during Syracuse’s spring practice. But that was before Paulus decided to try a comeback following a workout with the NFL’s Green Bay Packers.  Dantley was the starter last year.

The Orange, who finished 3-9 overall last year and 1-6 in the Big East, kick off the season on Sept. 5 against Minnesota.

Paulus’ decision to resume his football career at Syracuse and his subsequent crash course in quarterbacking has likely brought more attention to the downtrodden program than anything that’s happened since Donovan McNabb took the Orange to four consecutive bowls from 1995-98.

Paulus now is trying to make sure he’s remembered for more than preseason hype.

He recently completed a summer semester of classwork toward his Master’s Degree in Television, Radio and Film and is into his second week of preseason camp, trying to sponge up as much of new coordinator Rob Spence’s offense as he can while shaking off some rust.

“It’s the strongest I’ve been,” he says. “Switching from basketball condition to football is a little different, but after a couple of months of running, with our strength coaches, I feel I’m in pretty good shape.”

Senior wide receiver Lavar Lobdell, a former high school teammate of Paulus, has noticed. “He’s a few years wiser, and now he’s got some muscles on him, which helps with his stamina and the throws he has to make,” says Lobdell.  “He’s determined; he’s definitely one of the hardest workers on the field, from a physical standpoint and a mental one: film room, getting with the coaches, picking their brains.”

And he’s engrossed in trying to pull off a unique college-sports double play.

“Having the opportunity to play at Duke is something I would not change for a minute; I learned so much and grew so much from that,” he says.

“And now, having the opportunity to get a Master’s from the best communications school in the country, and having a chance to come home and play football? I couldn’t pass that up.”

For more on why SU chose to go with Paulus as the starter, check out ESPN’s Joe Schad’s video analysis below:

Diary of a First-Time Intern

An Arkeg For The Flood