Get Your Popcorn Ready

As summer comes to a close every year, many college students are bummed out at the idea that classes are beginning again soon and they will have to switch their brains into the “on” position once again.  Although the adjustment back to school life may be tough at first, there is always one late-August tradition that makes the transition a whole lot easier – the annual release of Madden NFL for your favorite game console.  2009 is no different and on August 31, the world will welcome Madden NFL 10 – a video gaming experience that promises to recreate the authentic on-field feel of live professional football.

Madden NFL 10 has several key new features, including Pro-Tak: a new animation technology that allows the ball carrier to drag defenders up field, attack with up to 9-man gang tackles, fight for fumbles at the bottom of the pile, and avoid pass rushers with all-new quarterback mobility functions.  The newest member of the Madden franchise is the most customizable game to date as it allows users to run franchises like a real General Manager by drafting players, signing free agents, and managing the salary cap.  The online gaming community will also be pleased as a new feature allows players to link up and practice together to boost your skills.

So now that you know that Madden NFL 10 promises to be the best Madden to date, we have to take a look into the Madden Curse.  For those of you non-gamers who are unaware of the ugly history of the curse, here it is in a nutshell.  Before 1999, every Madden NFL game had a picture of John Madden on the cover.  In 1999 EA Sports changed it up and decided to feature a marquee NFL player on the Madden NFL cover and since then, certain cover players witnessed a drop off in performance or major injury.  Although the EA Sports development team and NFL players denounce the curse, it’s effects are hard to argue with.  A few notable victims of the curse are Michael Vick (2003-04) who missed the first 11 games of the season with a broken leg and threw for just 4 TDs in a 5-11 season and Shaun Alexander (2006-07) who, coming off an MVP 2006 campaign, missed 6 regular season games with a broken foot and failed to surpass 1,000 rushing yards for the first time since his rookie year.

This year’s Madden NFL cover features Steelers safety Troy Polamalu and Cardinals wide receiver Larry Fitzgerald, two superstars who both played in last year’s Super Bowl.  I guess the game designers felt that jinxing one Pro Bowler wasn’t enough, why not ruin the season for two studs?  I have Larry Fitzgerald on one of my fantasy football keeper league teams, so if the curse holds true this season then EA Sports will have a lawsuit on their hands because I do not take losing well.

All curses aside, Madden NFL 10 promises to be a classic game that will keep students away from their work and focused on memorizing the Indianapolis Colts playbook instead.  The summer is just getting underway and August seems far off, but before you know it you will have your controller in hand, ready to dominate the gridiron for another season.  Madden will be bringing the noise just in time for the school year. 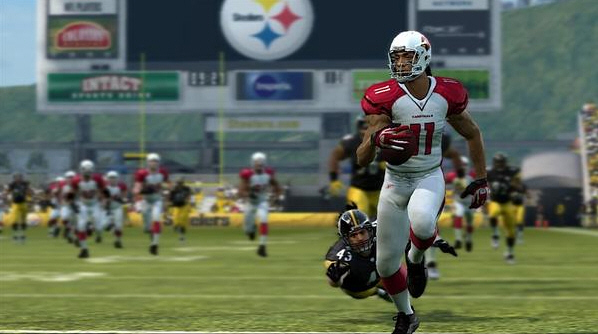