1. “I know this one dude who had to lay down in a bath tub all night at a party and all his pledge bros kept pissing on him instead of pissing in the toilet.” 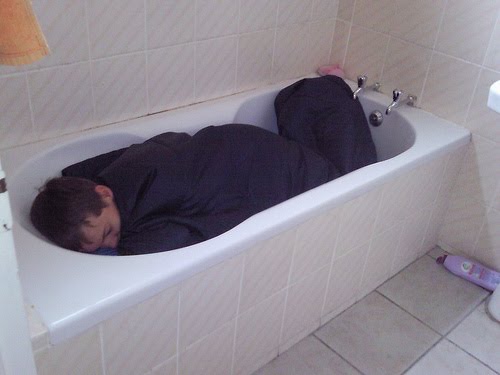 This is disgusting. Who inspired you to do this one guys, R Kelly? If I was that pledge, I’d never agree to just lay in a bathtub all night while my boys got wasted. The worst part about it is that when people drink a lot of beer, they pee more frequently. The bathtub was probably overflowing with urine and the pledge was probably drowning in piss. This isn’t called brotherhood this is called a golden shower, or bath.

2. “We saran wrapped 8 pledges together and watched them squirm to get free for 10 minutes.” 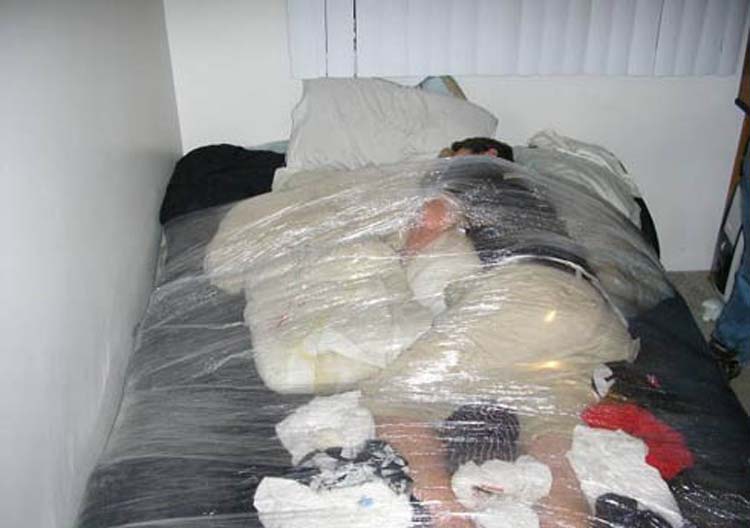 You would think saran wrap was made for fucking with people. That little bit of plastic can go a long way: wrapping cars, trapping people to beds, covering toilet seats, and less importantly, preserving sandwiches. The idea of wrapping 8 pledges together is a creative spin on the ‘saran wrap a pledge to the couch’ bit. Definitely takes that prank to a new level but I don’t know if it would be entertaining to watch them struggle for more than 5 minutes. I’d just dump them off in the middle of campus or at a sorority house to make it even more embarrassing.

3. “Our pledge master told us he wanted to redo his room and instead of paying somebody to paint it we had to take care of it. We had to move all his furniture out of his room and then paint the walls. But he kept coming in and changing his mind of what color, making us go get new paint, waiting for the wall to dry and then start over. After 4 different colors, he decided not to change his room and to leave it how it was. We had to repaint the walls and put everything back where it was.” 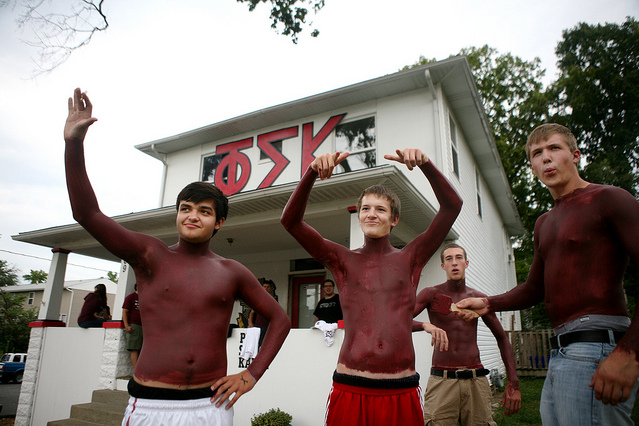 I’m pretty sure the huffer who thought of this just wanted an excuse to get high on paint fumes all week. The fact that he had no intention of changing his room at all is a dead give-away for a guy who loves inhalants. How high on glue was he when he thought of making the pledges do this? I’d never waste someone’s time like that unless I really did want my room redecorated, but even if I did, I wouldn’t trust a bunch of pledges to do it. Next time just go out and buy yourself a can of dust off.

4. “One night we made this one pledge wear red lipstick to the bar and told him he wasn’t allowed to explain it .. the reactions were hilarious and he had to act like it was normal the whole time.” 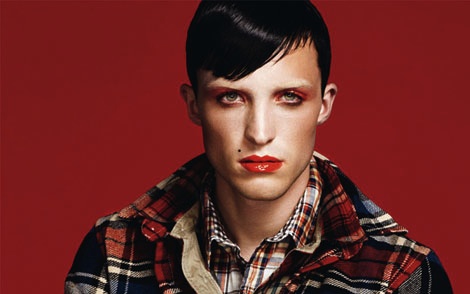 Whoa, this is pretty fucking weird. I question the sexuality of your frat, bro. Not being able to explain it really sucks, everyone must have thought this guy was a huge weirdo and probably still do. Even if he explained it to me the next day I’d still be confused. This is creepy and really freaks me out. Enough said.

5. “One of the pledges was forced to listen in on a frat brother having sex with the pledge’s ex gf.” 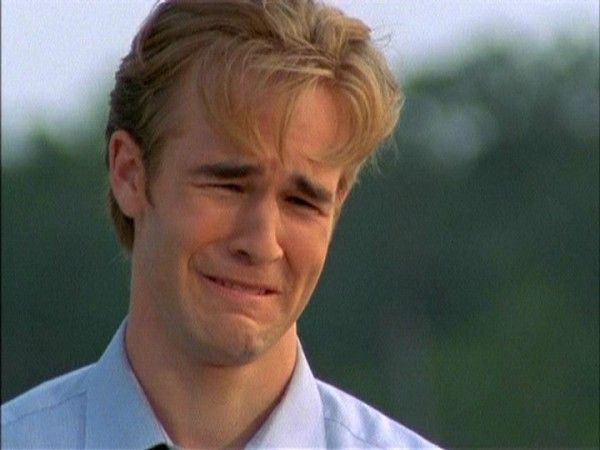 What a slut. This could be really fucked up depending on the timing. If they had just broke up and the he isn’t over his ex-girlfriend yet then this is obviously painful and cruel. But if he hates his ex and couldn’t wait to get rid of her, it probably wouldn’t have the same effect. I’d be pissed either way and want to kill the guy regardless. In terms of creating a brotherly bond this does the exact opposite. This doesn’t seem like hazing. It seems like one guy had a crush on his boy’s ex and used it as an excuse. Real smooth bro, real smooth.

6. “This one kid loved bacon, so the guys made him live in the house for 10 days and eat bacon for every meal. At first he was loving it but after 4 or 5 days he never wanted to eat bacon again” 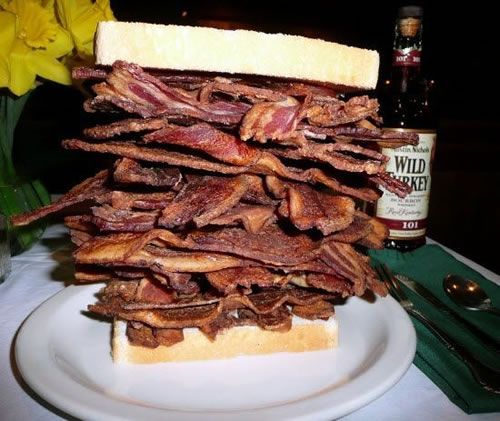 Who doesn’t love bacon? Bacon has a cult following like no other food. Just type it in to Google to see what I mean. But ten days of it? As much as I love bacon, the thought of that makes me want to curl up in a corner and vomit. I’m surprised the kid didn’t go into cardiac arrest from eating bacon 24/7. This has the potential to scar a bacon lover for life. I would not recommend this one, Bacophiles.

7. “Our pledges were all given a weekly kick in the nuts…I’m pretty sure they are all sterile” 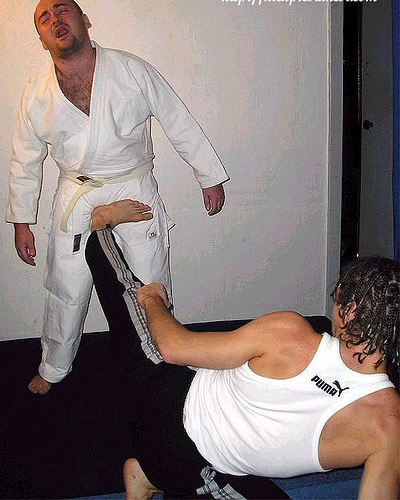 WEEKLY? Wasn’t once enough? Don’t you guys know how much that hurts? That’s just cruel and unusual punishment. This is completely unnecessary and fucked up. There’s nothing else to say except ouch. I feel for you bro. Good luck having kids.

8. “During our last two weeks of pledging, we weren’t allowed to feed ourselves. When we ate our meals we had to have a pledge brother feed us. It was humiliating and difficult at the same time. Imagine sitting in the cafeteria with everybody around and having your boy hand feed you french fries or holding a glass of water to your mouth so you could drink it.” 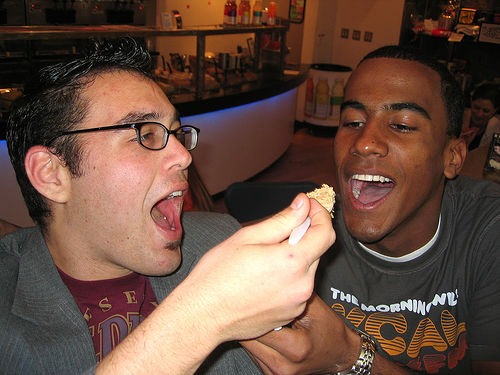 This is great. Mad funny idea. I’d love to witness this happen at a cafeteria, or better yet, a fancy restaurant. If I had to feed my brother I’d just fuck with him and shove food all over his face. Although I’d be nervous about letting my boys touch my food. You just don’t know where their hands have been.

9. “Made pledges eat dog food off the floor with leashes around their necks.” 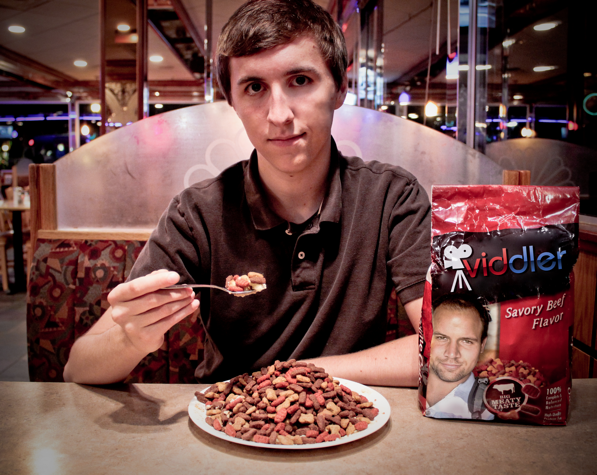 This brings a whole new meaning to the term “Pledge Bitch.” Making the pledges eat dog food is one thing, but the leashes? That’s basically saying: ‘We own you bitches now sit and obey.’ This one really puts the pledges in their place. Did you guys give them treats and take them on a walk around campus too? I’m wondering how far you took this one because you can do a lot of funny shit with it. This one has potential for creativity.

10. “My pc had to make signs protesting fat chicks and picket on campus in front of this wack sorority.. they said shit like ‘THIS FRAT IS ANTI-FAT’, ‘WE WANT HOT CHICKS!’, and ‘NO DICKS 4 FAT CHICKS’ .. random people started joining in to fuck around. It tuned into a scene hahah.” 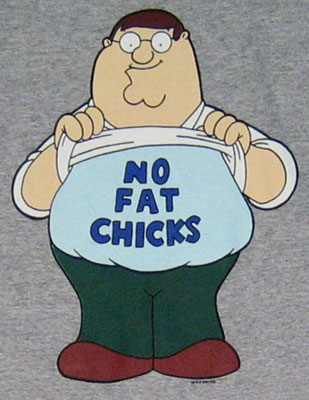 In the spirit of Occupy Wall Street I had to include this one. Who doesn’t love a good protest? At least this protest has clear goals and demands: fat chick elimination. That sorority must have been pretty busted if random people started jumping in for the cause.  It may have been rude and might make your frat look like assholes, but if effective, it could benefit pretty much everyone. Who doesn’t want more hot chicks to go around? Sadly this doesn’t actually accomplish much, besides of course making fat girls cry.

Check out  http://www.hazedandconfused.com for even more anonymous hazing stories.

Just in Time For Winter: The Crossbow Snow Launcher