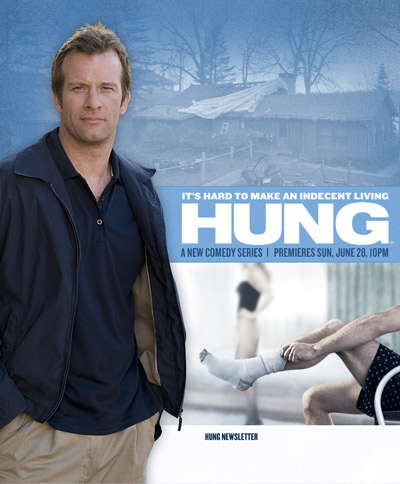 The summer brings great things: BBQ, baseball, warm weather, and girls splashing around in tiny underwear called a bikini. Anyway, with summer we have grown accustomed to sitting down on Sunday nights, relaxing from a rough weekend and just chilling with our favorite characters on HBO. From Larry David to Tony Soprano we find comfort in the HBO series which always put a perfect end to the weekend. After a long stretch of B-List shows, HBO is finally back and ready to take over the Sunday night spot once again. We all know how good Entourage is and just judging by the previews, Vince and the boys are in for a hell of a season. True Blood brings a strong second season back to us, and the premiere actually had more viewers tune in then the finale of The Sopranos, impressive stuff. But the new kid on the block which is sure to make a splash is Hung.

If you missed last night’s premiere let me fill you in on the newest HBO series. The main concept which the audience can pick up within the first minute is “desperate times call for desperate measures.”  The show takes place in a broken down Detroit city that has bottomed out like today’s actual society. The main character, Ray Drecker, has hit rock bottom. It’s like going home with a fat chick then going for round 2 in the morning when the room is light and you’re somewhat sober, and you realize you might have to sneak her out so your buddies don’t see who you brought home last night. Drecker, who once was king of the town, is now a recently divorced high school basketball coach, who has seen his home burn down and his kids move out to live with their mother. The only thing Ray has going for him is brought out when he runs into a past one night stand, who brings out the fact that this guy is hung like a horse, a real baby’s forearm with an apple on the end. With this tool he suddenly realizes he has a gift and just needs to market it to the females of Detroit and poof – instant entrepreneur! The first episode sets the tone for the season and is a must watch for any fan of HBO, this show could be the next the big thing. Think of Deuce Bigalow mixed with Californication and you get Ray Drecker and his new show with possibly the best name of all time… Hung.

CONAN VS. LETTERMAN: You decide.