When I see someone in possession of Lost Season 1 on DVD, I always ask the same 2 questions. (1) Has it taken over your life yet? And if the answer is no – I then ask (2) Are you up to the 4th episode yet? (“Walkabout” – where we find out Locke was once paralyzed). It’s the hour of television I will tell my children about one day. Last night reminded me a lot of that sudden turn around.

Line of the episode:

“Weirdest damn funeral I’ve ever been to.” – Frank Lapidus

I thought the opening sequence of the episode was genius. Locke is driving this pathetic looking minivan, pushing a button that doesn’t work to get him down to the ground, and then further embarrassed by some good old fashioned H2O. It all reminds us of what John Locke was off the island. I reference the movie The Wave again. John Locke had reason to buy completely into whatever the island was selling.

Something that caught my attention – Helen very much knew that Locke’s father had conned him prior to him being paralyzed. She sat with him in a car, outside his “father’s” mansion, and said he had to make a choice. Essentially “let go of the hate or let go of her. But in this episode, when Helen is fed up with all the wedding planning she says, “let’s just get my parents…and your dad…” and do something on a smaller scale.

In this alternate reality, does he conceal his past from Helen? Was Locke paralyzed in a different way than being tossed out of that glass high rise? Does Locke find out who his real father is? 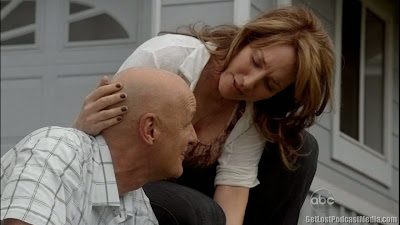 I think we have reason to believe that the kid in the forest is a young Jacob. Ballsmell recognizes him immediately. His clothes are similar to Jacob’s. His hair is basically the same color. And he knows the rules of whatever game these two are playing. I’m still confused by how much money each person starts with in Monopoly or how exactly one wins the game of Mousetrap. Honestly I never played a full game of Mousetrap. I just set up the sequence of events and watched it all unfold in a much lamer way than it looked in the early 90’s commercial.

One of my favorite things about Sawyer has always been his ability to read people. Being a con man, you can say this is probably his greatest strength. And Locke – he wasn’t going to get away with B.S.-ing a B.S.-er. “Locke was scared.” Even when he was pretending he wasn’t. Because let’s face it, Locke was a man who was literally lost, he believed to, on the island, be found. Was blind [handicapped] but now he sees. May I say – religion is some fucked up shit.

I think John Locke – or Ballsmell as John Locke – would be the best pledge-master any fraternity could ever ask for. He’s superb at the art of the mind fuck. We got a mass of scared people on the beach and he storms out of the statue and proclaims, “I’m very disappointed in all of you.” Well now what are they to believe? That they’ve been following the wrong leader? That they’ve all been duped and now this vengeful, violent god-like figure is going to punish them unless they repent?

Who said “don’t’ tell me what I can’t do” to who we will assume is Little Jacob? Was that Locke or was that Ballsmell? Have they been linked since the beginning? Is Ballsmell a man of faith? The dark side – a side where you believe that destiny is inevitable and that we have no choice in our actions? Faith is a good thing. Too much faith is dangerous.  Following someone because they claim to have the answers…well now they’re just spelling out how they really feel about ethos being taken to the nth degree.

We’ve speculated that the ashes used to make rings of protection from the black smoke are the ashes of Jacob. Perhaps they’re just the ashes of former candidates. But Jacob’s ashes are more powerful than all of them. We’ll see Ilana use those in a triumphant action sequence. One that might just take the black smoke out for good.

So Rose really knows how to lay on the guilt huh? Maybe she learned it from Bernard – the Jewish dentist? I’m keeping hope alive that a member of the tribe contributes to this whole big shebang somehow.

And now they bring in the whole – no, no, Ballsmell can’t change shape again. He’s stuck like Locke. Until Nick Cage comes and wants to take his face…off. Stop bringing up new questions. Explain the rules you speak of.

The most unintentional funny moment of the episode: as Helen stands next to Locke’s lost luggage, the bald white man says, “Open the case, Helen.” She pulls out knives. But really, all I wanted to see was a small dollar amount so that the banker’s offer would’ve gone up.

And Ben as a European History teacher? Those would be the most inadvertently frightening lectures of all time.

As if the episode wasn’t already overstuffed with religious imagery, they had to throw in Sawyer falling for his life from a ladder, admitting his powerlessness, and then reaching out to the higher power that is Locke/Ballsmell.

Locke discards a white stone from the scale. He claims it’s an inside joke. But we never heard Jacob and Ballsmell discuss colored stones. This was a conversation Locke had with Walt. So who’s inside joke was it?

The first thing the names in the cave made me think of was two lawyers selecting a jury. They choose these names together. They decide on who is going to make up a group of peers that will pass judgment on an individual. How that jury member leans – to the guilty or not guilty verdict – is up to them as the two sides state their case. So juror number 15, James Ford, seems to have chosen which way he’d like to lean in this case.

I wish they had shown more close ups of the names that have been scratched off. But obviously, the thing that jumps out to us is the numbers.

My best friend’s younger sister is in grad school, studying to be a Physician’s assistant. Last week he updated his Facebook profile, like a douche I might add, with the infamous: 4, 8, 15, 16, 23, 42.  My friend’s sister doesn’t watch Lost. She merely caught a glimpse of this FB status and decided to comment:

4 weeks until the fetal heart begins to pump

8 weeks until the fetal heart attains its final form

It fits in with the Juliet (and her “evil?” counterpart Ethan — two sides again) studying the mysteries of pregnancy on the island.

But what I’m more interested in is specifically who the numbers are assigned to. Number 42, Kwon. Yes it might be Jin. It might be Sun. It might be the pair of them, as they guard the island together and become the Adam and Eve skeletons when their job is done. Or it might be their daughter who has yet to come to the island.

Also, nothing is clearer than Kate’s absence from the list. Or at least listed as a number that matters to us.

My money is on Jack Sheppard, #23, a number he most certainly does not deserve to adorn, will be the final protector. But don’t sleep on #8 Reyes. And finally the wildcard – Desmond and Penny. Because hey, maybe the numbers are a curse that is broken in Hurley’s alternate reality.

Either way, Locke just got himself the biggest recruit to come out of the confederate states since Brian “Big Country” Reeves. But it only ends once. 13 episodes from now. Everything else is just progress.