Holy Lost! – Breaking Down Season 6, Episode 3: “What Kate Does”

Webster’s describes Deus ex machina as a person or thing (as in fiction or drama) that appears or is introduced suddenly and unexpectedly and provides a contrived solution to an apparently insoluble difficulty.

I put a lot of time and effort into this television program. I was there from season 1. I bare a scar on my right elbow from a fight over limited seating surrounding a small MacBook because in Firenze we had to watch season 2 a day late courtesy of iTunes. Seasons 3 and 4 are a blur. Living in LA through season 5 affected my relationships, as I had to ignore all East Coast contact prior to show time, in fear that key information would be leaked.

Someone asked after last week’s post if I enjoyed the season 6 premiere. My answer is — like the New York Knicks quest to get under the salary cap for the summer of 2010– we must stay the course. Be patient. Answers will come in time. Enjoy the precious few moments we have left.

But now, after all this, I am supposed to just accept explanations from a Chinese dude I met a week ago. That’s the contrived solution to an apparently insoluble difficulty. I always said it’s impossible for LOST to jump the shark. Now I’m not so sure…

Quote of the episode: “I don’t want to stick you with needles if I don’t have to.” – Dr. Ethan

Something I didn’t mention last week  — how much does it suck to be Sawyer right now? He loses his chick. Then he wakes up in the jungle. She’s alive. And then she dies. All. Over. Again.

I was interested to see what exactly was in Claire’s suitcase. She asked to get it right after Kate kicked her out of the car. But after seeing the contents, there was nothing so vital in there. The only notable piece was the Shamu the Killer Whale stuffed animal — another black/white reference, similar to the stuffed panda that Jin delivered to one of his boss’s enemies.

One of the only other shows I watch consistently is It’s Always Sunny in Philadelphia. I made mention to Mac’s cameo a couple of season’s ago, when he stood guard outside the Brainwashing Center. If you remember, Carl was hooked up Clockwork Orange style and forced to watch messages about Jacob. This is key for a couple of reasons. (1) Combine this with last week’s appearance of the Oceanic Stewardess and we know the Temple folk are on the same side as the people Ben and Richard led for a while. (2) The creators/writers clearly want us to remember that brainwashing incident. (3) Connect the dots between the brainwashing incident, Sayid being “taken over by a dark force,” Rousseau and Desmond injecting themselves when they were in isolation, and now Claire being the neo-Rousseau (which I’ll get to)…the “sickness” is probably the first big question that will be answered.

When Richard took a young Ben Linus into the Temple and brought him back to life, he claimed that the child would never be the same again. Now, Sayid, although revived in murkier, browner, Universal Studios tours looking water, is back to life and clearly not the same as he once was. Did Chinese dude and his crew learn about this dark force taking over a soul from the Ben revival? Are there others who were brought back to life and did the work of Ballsmell (Smokey) instead of Jacob? Christian Shepard for example? Or is it because Sayid is a natural born killer, and did so even after his work in the Republican Guard, that his soul was claimed by the dark instead of the light?

What’s really grinding my gears right now is that it still seems that everyone’s previous life in this alternate Oceanic universe is exactly the same with the exception of Hurley and Boone (since SHAN-NON! isn’t with him). I guess we can assume that Kate has a sharp contrast on and off the island. She ran from the Temple — running is what she does. Next she’s gonna start a shrimp boat empire. Off the island, in bizarro world, she didn’t run away from Claire and her sticky situation. She rushed to her side. To me, though, that seems to be more in Kate’s character from Day 1 on the island. She helps people. She helped her mother by killing her abusive step/biological father. She helped Jack sew his stitches. Etc.

However, this episode gave me new perspective on Juliet’s “it worked.” Yes, she died. She’s off the island now that Jughead detonated. “It worked” for her. Yet the psychic told Claire “none but you can raise the baby. You’re a good person Claire.” Now we have the Chinese dude telling Jack that Claire has been overtaken by dark forces. So she would seemingly be a bad person now. She’d be more unfit to raise her child than George Jung’s mother in Blow.

But in the flashbacks, you see, the psychic knew the adopting parents would be on the outs. He knew the man left that woman. He knew that woman wouldn’t raise the child on her own. He knew that because of this, Claire would decide to raise the child. And having never landed on the island, she would never be taken over by evil forces, she would remain pure-hearted, and the world would be safe from Baby Aaron. Unless Rick Moranis found a way to blow him up to an enormous size. Then we’re all in trouble.

Another good thing, depending on your definition, that this episode provided was the reemergence of the Jack-Kate-Sawyer love triangle. It’s no secret that I am an avid Sawyer supporter. I’m also a regular when it comes to criticizing Jack, especially his heavy breathing habits. Jack’s lingering goodbye to Kate, Sawyer’s bad boy who can’t be taught to love again, and Kate’s tearful solo on the docks have brought the uncertain romance back to the forefront. My money is still on Sawyer and Kate ending up together, possibly with Jack sacrificing himself so that everyone else can live. Or perhaps Sawyer and Kate end up together on the island but Jack and Kate end up together in the alternate reality?

Also is there a jeweler on the island? Where did Sawyer get that engagement ring? Looks like there might be a Jewish presence on the island after all!

Anyone else catch the name of that female detective that came into Claire’s hospital room? Detective Breastmanson? Sorry, back to more important issues…

In previous years I’ve talked about possible, albeit ridiculous, spin-off shows that could come from LOST. Some examples were a sitcom with Bernard moving in with Rose’s whole family in a predominantly African American neighborhood. Another was 24: Iraq — starring Sayid. Now I’m thinking bigger. A film. Picture this:

Home Alone: Australia. Claire has got some tricks up her sleeve, planting these booby traps better than Data and the Goonies ever could.

She seems to have a happy little trigger finger though, shooting Mac and his eager-to-tell-all counterpart, before knowing what was really going on there. Was Rousseau sick too? Did she have the darkness in her heart like the Chinese dude claims Claire does now? If Rousseau wasn’t sick, it makes sense for her to be going rogue on the island. 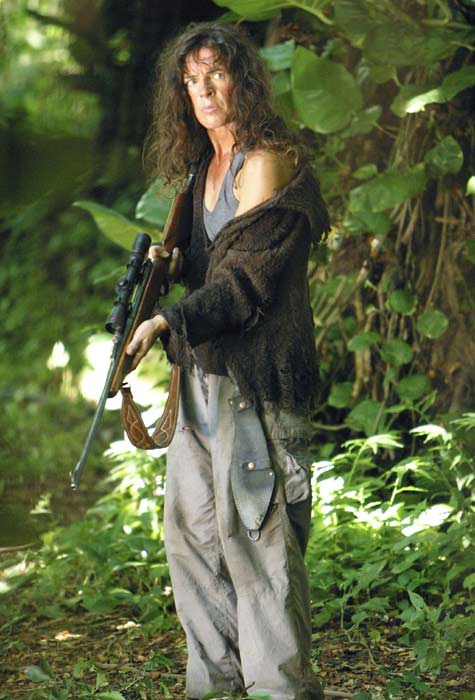 If Claire is sick, well then we can start asking a few more questions. Her little honeymoon in the cabin with Christian, or perhaps Ballsmell posing as Christian — were they plotting? Was she in on the whole John Locke debacle? The ash surrounding that cabin was once assumed to be protecting whatever was inside, presumably Jacob. But it could have been a prison of sorts — a small victory. Our Templegoers or Ben’s Others, they could have trapped Ballsmell in the cabin at one point, surrounded the cabin with that circle of ash, and then the smoke would be trapped. The cry of “Help me” that Locke heard could have been from Ballsmell the whole time.

I’m sure we’ll get more from the Claire story, narrated by the Chinese Dude or his four-eyed crony at some point. Get your shit together, LOST. Time is running out. But it only ends once. 14 episodes from now. Everything else is just progress.

Snow Day? Not for U of A