Holy Lost! – Coming Full Circle on Season 6, Episode 16: “What They Died For”

According to my Facebook profile, my interests are t-shirts, Boston Market and the New York Knickerbockers. To be honest, I’ve purposely left off a good number of my interests in that little blurb because I just don’t like people believing that everyone wants to know everything about everybody. It’s the same reason regular people (i.e. not reporters or ridiculously loose-lipped athletes) shouldn’t have Twitter pages. I don’t care if you’re going away this weekend or if you just listened to the new MGMT album. Same goes for G-Chat away messages, “Reply All’s” to certain emails and Facebook updates. If I want to know about you, I’ll ask.

Since y’all asked…I’m also a music fan. And I believe my feelings can best be conveyed through the magic of song.  (I couldn’t find the real version by the Replacements — trust me it’s a good song.) 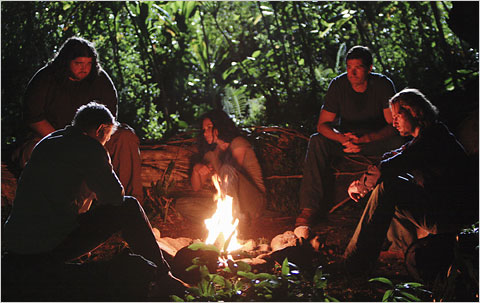 1. “He doesn’t get to save his daughter.” – Ben Linus, back to his badass ways

Jack bleeds from the neck. About a year ago, I would’ve welcomed the lack of platelets in Doc Sheppard’s immune system. Now, it saddens and confuses me. My guess? We’re about to see Ballsmell either manipulate someone into cutting Jack’s throat, or he’ll come close to doing it himself. This can result in two roads: 1) Frustration and realization that Jack is the new Jacob or 2) Jack dies forcing a more reluctant protector (Kate, Hurley or Sawyer) to step up to the task.

With Jack stitching up Kate’s wound – it looks like the show has come full…”sewing” circle? Thank you, thank you.

Something I couldn’t help thinking about in the beginning of the episode was the way our final 4 are mourning the loss of the Kwons and Sayid. It’s emotional, for sure. This is, again, a tribute to what made Seasons 1 and 2 so great. Strangers becoming family. It was a Very Brady Island. These loners all found heart-felt connections to their fellow survivors.

My question is this — why didn’t we see any of the “Others” mourn this way when Goodwin died? Ethan? Big Gay Tom? The guy Juliet shot? Was it different for the Dharma Initiative 2.0? They were recruited, hired hands, like the New York Yankees. Whereas our “Core 4” came up through the farm system together and truly experience the loss of their friends. Perhaps this is what makes our Oceanic passengers so special. Everyone who comes to the island by mistake still have the ability to feel. Those who come by choice are soon corrupted by the lusting for the light.

“Confession: I’ve never heard of C4 before 2 weeks ago.” – my friend J Dubbs

“Where were you when Rush Hour came out?” – me

“Um…Tropic Thunder?” – my friend Poddy, who decided to watch his first ever Lost episode last night

“Honestly I wanna kick your ass.” – Poddy — contributing in his first ever viewing to the enjoyment of the show

Rousseau doesn’t clean up as well as I thought she would. And while we’re at it – yes it makes sense that Ben be the George Michael father-figure that Alex is looking for. But doesn’t that offbeat attraction Rousseau clearly exudes toward Dr.Linus seem…off putting? Listen, ladies, you are a perplexing bunch. I don’t get you. However, I thought I had enough of an understanding to know that you wouldn’t want a piece of a Ginger, but why a dude with one arm in a sling, wearing weird looking John Lennon glasses and purple bruises all over his face? Another mystery of the island.

“You told her not to talk to me so that made her pointless.” And Zoe gets a jugular full of steel. A foreshadowing of Ballsmell’s attempt to slice Jack’s throat? Maybe. A display of how viciously ill Ballsmell is when he’s not the black smoke? Definitely.

By the by, the writers did a terrible job of answering why our villain isn’t always in the form of black smoke. “Having my feet on the ground reminds me that I was human once.” Really? Just tell it like it is. “If I’m always in the form of black smoke, then visually it’s boring to see me kill characters the same way every time. This way, I can murder Tina Fey-looking supporting characters and henchmen using a number of hand-to-hand methods. Oh, and the special effects involved in creating the black smoke and its victims is too expensive.”

Ben – what are you doing? What are you doing, Ben? Widmore had a plan and information that I needed to hear about. He had broken a rule by killing your daughter. What rule? Whose rule? Aren’t you tired of getting your ass beat up by Jack and Desmond and Sayid and Locke? You’re in for another ass beating, dude. Hurley is going to sit on your face. Yea, you’re probably conning. But it didn’t work for Sawyer. Then again, Sawyer doesn’t have an Emmy and you do.

Also loved the whole “then whisper it to me, Charles Widmore.” Any other ways they can not tell the audience anything while moving the story forward? Is the series finale going to be in Morse Code?

Care to elaborate on how our Candidates are flawed, Jacob? Because I really think that all humans are flawed. Name me a perfect human being, besides Clooney. I can’t think of one.

I know I get a lot of flack for not “loving” the show like I once did. But hear me out. If Cuse and Lindelof had every season mapped out, then I can forgive not answering little questions (like the “Hurley” bird, Locke’s father getting to the island.) Yet, the big ones should have a central theme they can draw back on. Why did we pick these candidates? Because they each made one HUGE mistake that they wish they could take back. A conclusion we can come to based on what we’ve seen over the last 6 seasons. True, all of our characters are flawed. But they’re LIKE Jacob because they each made one big mistake.

Jacob – sent his brother down into the light 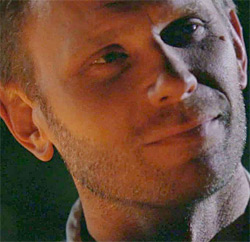 Jack – turned his father in

I have no problem with the obvious choice of Jack becoming the new protector. Nor do I have a problem with his quick certainty that he wanted to perform the task. That makes sense. Everything up until this moment has brought us to that decision.

And away we go to the Driveshaft concert. Where we’ll see Juliet as Jack’s baby-mama.

Where Jack and Kate will hopefully remind each other of their life on the island.

Where Sawyer will chase our fugitives, find Juliet and have his reminder.

And Sayid will take a trip in Hurley’s hummer to find SHAN-NON!

And Locke will walk and remember his real-life walkabout where he once discovered a hatch.

Now Desmond is interesting. He still has to make the ultimate sacrifice. We don’t know exactly what the light is. We never will. But I think we can assume that the whole show will come to a head at the center of the island. That’s where Ballsmell is headed. You can bet Jack will take the Core 4 there. And my guess is that’s where they’ll find Desmond.

And Desmond has the ability to withstand the heat from that. Destroy the island? Maybe. Or maybe there will be a tussle. Desmond will get entangled with Ballsmell, and the two, together will be carried down into the light. Desmond’s purity, and ability to withstand the electro-whatever, will only make the light grow brighter. It will release our islanders into the sideways world we’ve heard so much about. And Ballsmell will be destroyed. I can’t think of any other way to kill that thing, can you?

Remember the opening sequence of the season – the island was sunk, not destroyed. From what I remember, Ballsmell couldn’t smoke monster his way over to Hydra island either. Why? Because smoke can’t exist in water? Seems like a soft explanation. But if we drown the smoke, out of existence, that seems like a pretty effective way to protect the light.

And our survivors not only save the world, but change their own destiny. Desmond is there simply to provide the missing piece of island life that changed all of them for the better – the connections. The magic of the first two seasons. If the island is sunk, and the plane never crashed, well then they’ve all never met. But they gave each other’s lives meaning. If they REMEMBER all that, then their lives are truly complete. They are the light. And they’ll pass on that light through their children. They are the all-singing, all-dancing crap of the world. It’s like reconnecting with camp friends over the 10 months apart. Cheesy, yet tangible. And so inspired by the Elton John tracks on The Lion King soundtrack.

The coming attractions to next week briefly showed the scene where Locke is in the hatch and first sees that glow in the dark map of the island. Firstly, the big question mark in the middle of the island can now be identified as the light. Secondly – that’s what I miss. Little mysteries. Plausible mysteries.

What I can’t figure out is – what’s Miles role in all this? And Richard’s? What will they do in the end?

But it only ends once. On Sunday. Everything else is just progress.

Flirtexting… Do You Have Text Message Game?

The Campus Socialite Party: Were You There?