Holy Lost! – Connecting with Season 6, Episode 11: “Happily Ever After”

We’re getting there. Maybe. We’re at least getting to the point where I can stop telling people, “Nah man, I can’t get [drinks, Boston Market creamed spinach, nitrous, etc] tonight. It’s Tuesday.”

I mean at least in 5 weeks I’ll be able to pull a Jim Carrey and say “yes” to everything. I vow that every offer that comes my way, when this is all over, for a Tuesday night — I will say yes. Or a variation of the word. “Yea.” “Sure.” “You bet your sweet ass…” if you’re not into the whole brevity thing. This whole thing has been the best experience I’ll never want to do again. But I digress… “I know when it’s scheduled!” – Charles Widmore, because he pronounced it “shed-you-uld”

Let me start by painting you this little picture. You get shot. That sucks. Then you’re in the hospital, which also is a total bummer — with the smell and the food and the way you can’t sleep on your stomach. Next thing you know, you wake up in a strange room, staring into the eyes of the father of your bride. Oh, and he hates you. Because you’re not good enough. And he doesn’t approve of your flowing locks. That’s a legitimate “FML” entry.

Again, as much as I truly enjoyed this episode, and as much as I think it cleared…well cleared the way to answer some things…it just brings up more questions. Why Desmond? Why can he survive this kind of extinction level event? What’s his connection to Widmore? It just so happens that a former chosen leader of the Others gives birth to a daughter, who meets Desmond, falls in love, but then he ends up deserted on the island, and happens to be the guy with the unique ability. 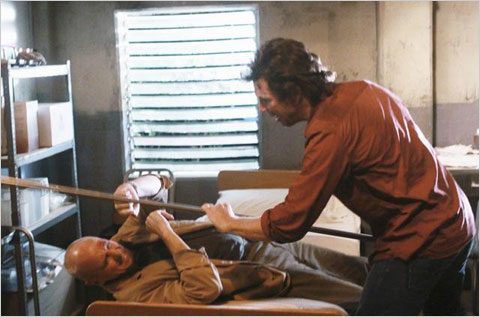 As soon as Widmore said his son, I prayed that Faraday would have a limited role in the episode. Thank you for that, writers.

Ok. So Desmond has a very, very peculiar quote in the bar with Charlie…(Mr. Pace — I kept thinking he was calling him Mr. Bass.) This should probably be the quote of the episode. “There’s always a choice.”

Sound familiar? It should. But wait. There’s more to come…

We’ve all come to the conclusion that these side-flashes represent a different life for our survivors. A chance for them to go back in their lives, correct one mistake, and then carry out their existence accordingly. Eloise got to go back and, instead of forcing her son to pursue an intense education in Physics, or whatever science he’s into, allow her son to follow his heart and play the piano. Avoiding his previous path, which would eventually lead to his murder.

So the new questions that pop up: Because Charlie was dead when the bomb exploded, did he not have chance to rectify his one mistake? When Juliet uttered her last words, “it worked,” was she talking about her alternate life that she sees for herself…and perhaps Sawyer? Why is Jack’s life better in this alternate reality? Or Kate’s? But let’s go back to Desmond’s quote.

Like Rose. Off the island – she tells Locke that she has terminal cancer. So she CHOOSES to stay on the island with Bernard. They become Adam and Eve.

Or Jin and Sun. Off the island – Sun took a bullet the baby maker. Their kid is most likely merked. But on the island, they know their child is alive and well in Los Angeles…or wherever they left her watching Hello Kitty. Clearly their lives are better suited with Reality #1

Kate – maybe her place is on the island where she doesn’t have to run anymore.

I think Hurley’s back-story next week will shed more light on the subject. Is it better to be off the island, rich and lucky (probably) or is there a major flaw in his 2.0 Reality. His “Matrix world” as a friend of mine described it.

“You’re not ready yet.” – Eloise to Desmond

Ok (1) Shady that she knows exactly what’s going on. Specifically because it appears that Widmore has no clue. She’s just a freaky old lady who moves through space and time, and always is in the know. (2) I took particular notice that this little outburst occurred when Desmond was trying to get a hold of the guest list. A list. Much like that which Jacob would compile. Jacob, who we’ve previously heard say, “There’s always a choice.”

The latest polls show candidate Hume leading the race to take over for Jacob. More to come on this…

Daniel “Widmore”: Are you looking for someone?

He surely is not for he pursues his vision of Penny in the same stadium where Desmond met Jack running the steps. This makes his “Matrix world” come crashing down as a facade. Because without love…as Charlie described it…what’s the point of life? And thus, more pissed off I’ve become. This cheesy thesis statement is going to be the show’s focal point? Our characters choose the life that better fits their love line? Is the cast going to close the series by singing a rendition of 525,600 minutes? 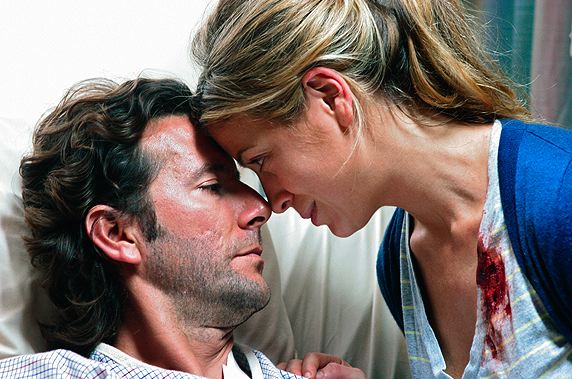 This will bring Kate’s story full circle. She saw Jack as she was escaping in Claire’s cab from the airport. Now she’s just run into Sawyer. Which is the right choice for her? Hurley to be reunited with Libby? Maybe.

Point is Desmond’s seen that he can have it all. The power. The money. The respect. The expensive whiskey. And the girl. So he’s willing to go along with whatever Widmore is peddling, and, in the end, make that dream come true.

But it only ends once. 6 episodes from now. Everything else is just progress.

TIGER Sales UP Despite How Often He’s Been Going DOWN