The People vs. Lindelof, Cuse and Abrams

This is about as far as I can get. Now that we have a case title, I’m stymied. What Erin Brokovich has taught me, personally, is that a class action law suit is my best chance in getting the past 6 years of my life back. My friend, Dave, took time out of his busy law school studying schedule to watch last night’s episode with me. By the end of the show, the abrupt back and forth went like this:

MJ: Dave, can you help me fill out a law form?

“There is no Sayid.” – Jack Shephard, just because it sounded cool.

Nice little full circle reference when Jack tells Locke that his dural sac ruptured in the hit-and-run. This was the first story Jack ever told Kate, when she was stitching his wound. He let the fear do its thing for 5 seconds…

Don’t know why Sawyer thinks he can con someone who can turn into black smoke.

Another reference to past episodes was when Jack buys the Apollo bar — same one he got the first time he met Jacob in the hospital. If we want to be total nerds about it — Apollo was the Greek God of the sun. Two sides — Dark and Light. Sun (the star, not the Korean) = Light.

Yet another one — music box playing “Catch a Falling Star.”

With one fell swoop (and mind you this can contribute to our class action LOST suit…that was lame of me) the minorities are all gone. Except Hugo. But I think that high cholesterol and/or adult diabetes will catch up to him soon enough.

Sayid — well he died one season too late.  And the Kwons…I wasn’t terribly sad to see them go. I am certainly concerned for their baby back home. She’s now forced to become a Prince of Maine, a King of New England, and ultimately an apple picker who scissors Charlize Theron. Looks like the Kwons are not the skeletons in the caves.

Ok, so despite the misery that accompanies my thoughts involving why Ballsmell doesn’t ALWAYS turn into the black smoke when he wants to murder, why he can turn into black smoke at all, and why he struggled to get out of the water when Jack gently pushed him into the ocean…Jack did shed some light onto things.

Ballsmell cannot kill them. It’s against the rules. Whoever the new Jacob is…he can’t kill him. Just like he couldn’t kill the first Jacob. He had to find the loophole and create an endless Rube Goldberg-esque plan to finally have Ben do the deed.

Maybe it’s Desmond. That’s why he asked Sayid to finish him in the well.

Or maybe it’s one of the other Candidates that we already know are listed. If you put them in a confined area and someone does something stupid, like pull the wires out of some C4 that would definitely do more damage to a submarine than spring a coupe of leaks and blow up a long-haired SHAN-NON!-lover not named mos jef, then it’s not Ballsmell doing the killing. So whoever the Candidate is — he’ll be offed and this will allow Ballsmell to leave the island.

The lingering question is — why would Widmore want to blow up the Candidates? Does he possibly know that Desmond is the one? If he protects Desmond at all costs and knows him to be the next Jacob (like the long haired figure sitting at the rocking chair in the shack? who says “help me” like Dez did in that electro-magnetic gravitron thing?) then the others don’t matter.

A tough pill for me to swallow this episode was that I kind of, sort of, maybe like Jack more than I like Sawyer recently. Sawyer is responsible for killing Sayid, the Kwons, and possibly Lapidus.

I’ve stuck to my guns since the Ajira flight — Kate’s pregnant. Now, we know that Kate Austin is not a candidate. We know that someone with the last name Shephard is a candidate. I don’t know how it works for bastard children. Do they take on the father’s name? What if they don’t get married, but live together like Tim Robbins and Susan Surandon? Tim and Sue? (I know this is not a relevant reference anymore, but it was when Paul Rudd sang about it in Role Models.) Anyway, Tim and Sue’s kids took the last name ROBBINS. Not Sarandon.

Stay with me. Jack knocks up Kate before the Ajira flight. Why? (1) They were engaged at one point so it’s safe to assume they raw dog. (2) The Ajira flight is supposed to mimic the Oceanic flight as much as possible. Preggo Kate = Preggo Claire. (3) Because Jack plants the seed of the real “Candidate Shephard” into Kate’s uterus. You watch. Ballsmell will at one point try to kill Kate. And she’ll survive. Because right now, she’s a vessel for the golden child. So Kate isn’t a candidate, but the tenant in her uterus is.

Not only will that be a twist I can jump on board with, but it can also serve as a vehicle to explain the whole pregnancy complication conundrum on the island. And guess what? Kate and Jack…or Sawyer if Jack decides to sacrifice himself…will stay on the island to raise New Jacob. And while New Jacob can stay behind and make sure Ballsmell never leaves, the parents will not be granted eternal life. Or they will opt against it. Thus — the Adam and Eve skeleton’s in the cave.

Now that I’ve blown your mind all over your face, let’s think about something else we’ve all overlooked. Why do we keep calling this guy Ballsmell, besides the fact that it’s a humorous temporary title? But really, why don’t we know his name? People on the island have asked. He’s never given a straight answer.

I know a lot of folks have suggested to me that he represents Esau in the whole Jacob/Esau biblical story sense of the word. Could make sense. Also, if we gave away his name as Esau, it reveals a lot about the story. I’m not so high on this theory because, well, that’s lame. I don’t want to have spent the last 6 years watching a Hebrew School educational video. Also, separation of church and TV (lawsuit again!)

What if his name is Aaron?

I’m hung up on the Season 1 episode when the psychic tells Claire that great harm will come to this world if she doesn’t raise her child. Also can’t help but notice that Ballsmell, in the form of Christian Shephard, took a particular interest in our resident nappy-haired Aussie broad. This nurturing relationship they share hasn’t aided in the merking of Jacob. It hasn’t really benefited Ballsmell at all, actually. However, if he is Aaron, perhaps he has to make sure that Claire doesn’t raise him so that he can become this monster… 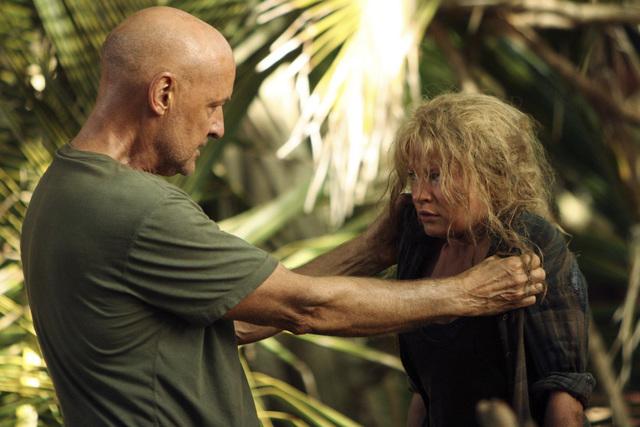 Yes, he’s a brunette and Aaron has hair of gold, like his mother, but like all parents of gingers know and hope for, hair color can change as one grows up. In addition to this, we’ve heard Ballsmell say before that Jacob took his body. He also said he’s felt betrayal, loss of a loved one, and had a crazy mother. Claire left him in the jungle. Claire can easily die before the season’s end. Claire is a woman and all women are crazy. But in a more relevant sense, Claire is really crazy.

Little blonde kid in the jungle running around? Could be Ballsmell’s former body…roughly Aaron, age 10? The age when Jacob took the body from him?

I’m sure they’ll wrap it up with a satisfying, comprehensive solution in the end.

But it only ends once. 3 episodes from now. Everything else is just progress.

Put Some Spice In Your Sex Life!