You know what’s a good show? Top Chef. You get what they promise on that show. Every episode I know I’m going to see some cooks throw it down, at least two times within an hour. And after that, I know at least one of them is packing their knives and going home. No surprises. Oh, sometimes they tell me they can’t cook with meat. Or they can only use microwaves. Or they don’t choose their partners. But they never jump through time or get cursed by numbers or experiment with electromagnetic fields. They cook. Judges eat. Someone goes home. I then research the restaurants advertised in the program and decide if and when it’s possible to try the place out. (By the by – Phish 4th of July weekend in Atlanta, GA…you better believe I’m binging on pork at  Kevin’s Woodfire Grill.)  Now on with the analysis…

“Probably.” – Lapidus, in response to Sun’s writing “Did we make a mistake?”

“I figured you liked cheese because everyone likes cheese.” – Hugo Reyes. So true.

First thing that caught my attention, besides the S.A.D. (Shady Asian Doc) presenting Hugo the award, was that one of the developments Hurley donated his riches to was for Paleontology – the study of prehistoric life. Anyone remember the huge bird that swooped by our jungle-goers heads on their way to the docks (where they first found out Ben was leader of the Others)? Hurley said “Did that bird just say my name?” Probably nothing substantial in that.

Also – did the Hurley tell his mom his next award was from “Human Fund?” The fictitious charity created by George Costanza to weasel his way out of getting the entire office Christmas gifts? All of this coming to a head at Frank Costanza’s Festivus celebration? Are we to believe that the show won’t end, and hence our survivors won’t get off the island, until someone performs the Feats of Strength, pinning Señor Reyes to the ground? Either way, I have a serious Airing of Grievances with the writers.

Something that seems odd to me is that Hurley wouldn’t tell Jack who was talking to him. Jack’s a believer at this point. He’s seen that Jacob has a bigger plan for him. If Hurley were crazy, he wouldn’t have been able to lead them to the lighthouse to begin with. Jack’s someone who by all means has given us every reason to trust him. I may not like him, but God damn it do I respect him. Having said that, Hurley should’ve told Jack, “I was talking to Michael. He said ___________. He’s also sorry about having his alias, Kevin Johnson, unfairly make us compare him to the once-great Phoenix Suns point guard and current mayor of Sacramento. Now what, Jack?”

That’s just logic. Just like it’s “logical” for the writers of the show to not make Hurley’s one day off the island at a Mexican restaurant. Another Seinfeld reference? Donna Chang suggested Jerry and her meet at the Chinese Restaurant for dinner?

Are LD and Lost’s brain trust in cahoots?

I don’t know if my jaw has ever literally dropped before last night when Ilana got blown the eff up. That was awesome. With that explosion, they’ve pretty much accomplished eliminating all inconsequential characters that we’ve gotten to know by name. It’s actually a clever ploy. See, in doing so, they make us believe that there was a lot of action this season. Remember all those dudes and chicks who died in the temple? And now Ilana? Many deaths. Nothing gained.Hurley grabs the pouch of Jacob’s ashes. Don’t know how these ashes will come into play besides the whole “make a circle around someone at some point in the next few episodes.” But with Hurley’s shoulder-length curls, all I could think about was Brian (Jim Breuer) buying the remains of Jerry Garcia from the brother of Andy Garcia. In Half Baked, the ashes saved the day in the end too. So, we got that going for us.

At this point of the episode I was almost positive Ballsmell was leading Desmond to Jacob’s love shack.

Anyone else catch what Hurley said after blowing up The Black Rock? “I’m protecting IT.” What? The island? The plane? The black smoke?

Little boy in the jungle again – I still assume this is young Jacob. He’s not just visible to Ballsmell, and it’s funny that he came out of nowhere as Desmond was led to his would-be grave. Yet, the little boy said to Ballsmell, “You can’t kill him.”

Obviously, it’s against the rules. So he can’t kill Desmond? Or he can’t kill the candidate that will replace Jacob? Or are they one in the same? #108? 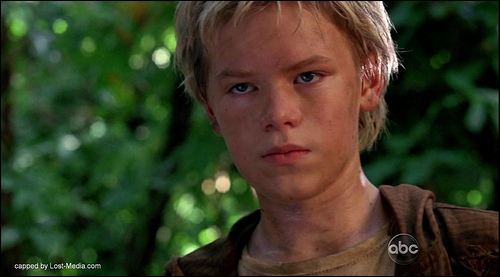 The well, which is clearly the passage to the donkey wheel that will be turned again and the island will be moved and will most likely set off the series of events that leads our survivors to this alternate reality, is not Desmond’s final resting place. He’s still very much alive. It’s just that both his legs are broken and his wounds are beginning to smell like almonds.

NOTE: I believe when Ballsmell says that there are “other wells” he means that as a metaphor, that there are other places where Widmore can exploit power from locations/islands that make compasses go haywire.

Let’s also remember this – Ballsmell had the opportunity to let Sawyer die. He could have let him drop off that cliff side before showing him the list of candidates. He can, it seems, kill at will. However he didn’t care to take all the precautions to make sure Desmond was dead. He didn’t turn into the black smoke and decimate Widmore’s secret weapon. Why? Because he CAN’T kill him. He left him in a hole. He was stowed away. Like he was for years in the hatch. He’s OUT OF THE WAY. But they wouldn’t want to answer that would they?

And despite the insignificant killings, the racist blind date locale, the new secrecy Hurley’s operating under…nothing pissed me off as much as the explanation of the whispers.

Oh, they’re just those who are stuck on the island and can’t move on? So, not only are we completely ripping off the Sixth Sense now, as we’ve joked about numerous times in regards to Miles and Hugo, but now we’re not following our own rules.

When you work in fantasy — you MUST FOLOW THE RULES YOU CREATE.

So what they’re saying is when Shannon, and then later in the same episode, Shannon and Sayid together, heard the whispers in the jungle, and Walt (soaked in something) appeared…he was a ghost?

When the tail end survivors are climbing up a cliff side, they hear the whispers, they turn around, and the Aussie Stewardess has been taken by the Others…those were ghosts?

Eko hears the whispers right before getting merked by the black smoke. Ghost?

How does that make sense? You can think of countless examples where it fits. Sayid hears them after leaving Rousseau (yet sees nothing.) Rousseau hears them for years in the jungle (without seeing anything.)

And to top it all off, Miles couldn’t decipher those whispers? The guy who speaks to dead people whenever he feels like it, couldn’t pick up on what’s being said?

Someone told me they think those whispers were warnings. But why warn us that Walt is about to speak backwards? Why warn anyone against the Aussie Stewardess being taken? She seems pretty safe and content in her life with the Others.

If anyone can clear this up for me, I’d be glad to listen. But this just doesn’t make any sense.

John Locke just got, as my friend Noah used to say when we played Rushing Attack on Madden ’05, fucked up like a car crash. The question is will he remember his island life now that he’s lying on the ground staring up at Ben? Or will he remember it when Jack fixes his back in the upcoming, inevitable surgery?

You saw the way Ballsmell and Jack looked at each other on the island. Is that their love affair? Hurley kisses Libby and remembers his life. Desmond sees Penny and remembers. Daniel sees the Ginger. You have to imagine Sayid will see Shannon. Maybe Jack and Locke are soul mates, too.

At least they jammed in a twisted version of a Willy Wonka song in the scenes from next week, right? We had to get a little Gene Wilder in there before it all ends…

But it only ends once. 5 episodes from now. Everything else is just progress.