I can’t say that I’m surprised that almost every single “big picture” prediction that I, or anyone that I know for that matter, have come up with thus far has been seemingly off target. Clearly, we’re all dumb. True, we’ve gotten little tidbits correct here and there, but the major stuff? Not so much. I’ve used the analogy before — I feel like a girl over analyzing a text message. I mean, I’m still fixated on what the psychic told Claire in Season 1. I’m still questioning Juliet’s work on the island. I’m still questioning the numbers.

Call me Old School, (seriously, next time you see me, I’d appreciate you calling me that) but I just want things the way they once were. The way things are going now? Jack’s baby mama will be an entirely new character introduced 45 minutes into the series finale.

Having said that, I really loved the episode. Quote(s) of the episode — finally there’s more than one:

“Yea, but you can always bring people back from the Dark Side.” – Hurley, in all his Star Wars nerdiness

“Wouldn’t work sweetheart. I’m a cop. You’re a murderer.” – Sawyer with faulty logic. George Clooney could pull off such an affair

“Looks like he stepped off the set of a Burt Reynolds movie.” – Sawyer on Lapidus. I couldn’t have put it any better myself.

That opening conversation made me lose all track of time. Strangely, I feel myself really liking Jack. Something can’t be right about that. Oh, I know what it is, I’m not in religion class preparing for my communion. Or confirmation. You know, one of those rites of passage for the non-members-of-the-tribe.

I think it’s logical for Jack to become the disciple of the dead John Locke. Locke dies for the sins of those who left the island, and Jack sees the error of his ways. Now the devil is telling him they all have to leave together. In fact, one of the most sound arguments of perhaps the entire series was when Jack told Sawyer — why would this guy want them to leave so badly? What is he afraid of if they stay?

“Because you needed to find water.” – Ballsmell

Great, great quote. And it opens our eyes to a debate that I think is potentially bullshit. So what Ballsmell’s saying is every time he appeared, it was to help our survivors. The three most glaring examples of this in my eyes come from (1) Eko’s death, (2) Hurley seeing his imaginary friend slash Libby’s dead husband, and (3) Ben seeing his mother.

One at a time now. (1) Eko sees his brother who asks for his confession. When Eko offers no apology, he gets merked. Eko shows no fear. Sure reminds me of Desmond’s most recent run-in with Ballsmell, doesn’t it? Basically, religion, operates on fear. Fear of the unknown. Fear of Hell. When a Survivor no longer has that fear, well, there’s nothing that the dark forces can do to persuade them to join their side. So — this appearance, unlike the “finding of water,” was not for the benefit of our crew. 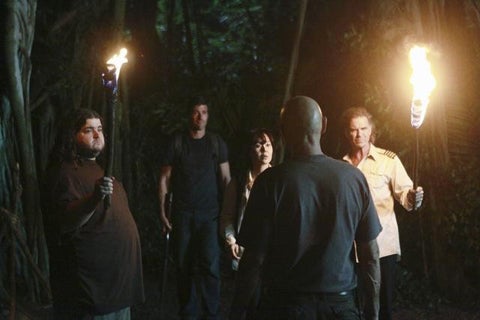 (2) Hurley sees Dave in the jungle, who tries to convince him that the island is all in his head. The numbers, Libby, everything — it’s all happening while Hugo is locked up in the mental institution. So what does Dave try to convince Hurley to do to end it all? Climb up to a cliff and jump off. Eliminate one of the candidates. Again, this doesn’t feel like an action that would benefit our survivors.

(3) Ben sees his mother in the jungle. Then he runs into Richard. This sets off the whole chain of events that would eventually bring Ben into power, knock him from that perch, when he’ll ultimately kill Jacob.

Like Claire told Jack, his decision was already made. And like Dogen told Sayid — if you let him speak it’s already too late. Also, that was a really long walk Jack and Locke took together, huh? It’s like when you go see a movie during the day, and then you leave the theater and it’s dark outside.

Kate, take off that effing baseball cap. There are few things I hate more than girls in baseball caps. Plus 1, once again, for SHAN-NON!

Demond and Claire go up to the 15th Floor.

I missed this during a commercial break, but one of my fellow viewers said something about “Hugo” being the “Lucky Pierre” in between Locke and Jack. Don’t know what a Lucky Pierre is? Feel free to Google now.

Got it yet? I have a sick, sick friend.

Somewhere along the way of this episode, I remembered why I love this show. I think it was when Kate was sitting with Jack, and he talked about how they’ve all changed. This show used to be about a plane crash. It used to be about survivors, strangers, forced to know each. Really know each other. These people had to figure out how they could contribute to a society from the ground up. They could trust each other. They had to. And why wouldn’t they trust each other? They were all in this mess together. Where else in the world could a murderer befriend a spinal surgeon? A lottery winner listen to eerie walkie talkie radio with a member of the Republican Guard? A rock star lick faux peanut butter off his fingers in front of an Aussie preggo chick? I guess that last one can happen anywhere.

Still not completely convinced that Sayid didn’t wish for SHAN-NON! All signs currently point to Nadia, but there’s still an opening there.

Another very Jacob-esque, calm reaction by Desmond. “When she asks you what you did to be with her again, what will you tell her?”

Did anyone see that sick trap Sawyer laid out for Sayid using only his cunning and a garden hose? Spin off idea!

It will have to be a prequel — but if Sawyer gets his way and can time jump to change a mistake — we pick up when he’s a little kid. The con man, Sawyer (Locke’s real or fake father), breaks into his house to try and steal money from the family. But he’s about to find out that THIS house is more than he had bargained for! This little Southern tyke will do anything to protect his family, his house, and make sure Christmas goes on as scheduled. This holiday season, get ready for Home Alone 4.

Kate and Sawyer start swimming to the boat. We all noticed the rock jetty that clearly went closer to the ship. My friend Rudich said it quite simply. “I would’ve walked out further.” Agreed. Yet as Jamal Wallace pointed out, he should’ve said “farther.”

One thing I really want by the end of all this LOST hoopla is a comprehensive map of the island. How big is it? Where are these things located? I would buy a game of RISK centered on the theme of this show. I would relish going to the shack of Patches O’Hoolihan (aka Mikhail) and telling him “The Ukrane is WEAK!”

“Get off my boat.” You’re in good company, Sawyer, with your whole “Get off my [MODE OF TRANSPORTATION]” threat.

Desmond in the well — shouldn’t he have a bone sticking out of his skin or something? Looked like a pretty bad fall to me.

Keeping with this line of questioning — how is that baby ok? And why would Sun speak English to Jin when their native tongue is Korean?

And how does Jack’s son, dressed identically to his father, not have a catch phrase? He should be screaming for the Kangaroo song, talking about the human head’s weight, or chanting Quack, Quack, Quack when his pops needs a pre-surgery pep talk.

Sorry to keep poking fun, but when Ballsmell carries Jack from the beach, all I kept thinking was, “I GOTTA FIND BUBBA!”

Do we take this for what it’s worth? Is it possible that this was Ballsmell’s end goal all along? Jack clearly shows fearlessness in jumping off the boat, braving it alone, and staying on the island. Does this put him ahead of the rest as a potential candidate? If Ballsmell can narrow down the list of who is really in line to take over for Jacob, he won’t need EVERYONE to leave the island with him.

Far less to scrutinize in this episode than in week’s past. They’re setting up the playing board for an all out war on the island. Widmore and the majority of our Survivors on one end. Desmond out on his own somewhere. Ballsmell and Jack. I imagine the Aussie Stewardess and those kids are cozy in a safe house too. Looks like they’re really trying to wrap things up, make a clear-cut ending.

But it only ends once. 4 episodes from now. Everything else is just progress.

Meet The Businesses & Entrepreneurs At The 2010 Kairos Global Summit