This is a world record. Congratulations, Lost. You now have recorded the most “deaths of a loved one” and “last goodbyes with the words I love you” in the most languages in the history of television. 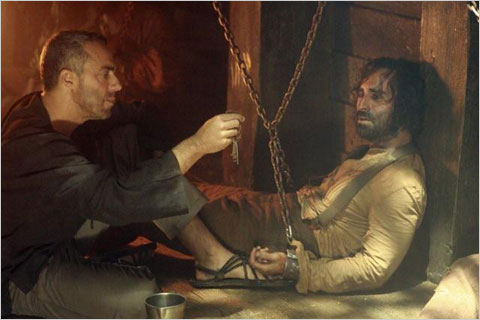 “It’s good to see you out of those chains.” – Ballsmell (same thing he said to Richard when he emerged from the statue, leaving dead Jacob to burn)

So we start with Ilana, and as she’s said before, Jacob appears like something out of the greatest George Michael song of all time.

Notice how Jacob had gloves on when he touched Ilana. This might be meaningless after realizing that Jacob granted Richard eternal life only because he asked for it. Not necessarily because he touched him.

We learned in elementary school there’s a difference between good touch and bad touch. Ballsmell touched Richard first. But I think of this more as a metaphor. He “got to him” first. He was pretty convincing too, making me waver in my faith that Jacob is the good guy in all this. So the question still remains – if Jacob touches you, are you automatically granted invincibility? Or do you have to ask for it like Richard did? If it’s the latter, then why did Jacob so clearly have gloves on when he touched Ilana?

Second thing that caught my attention in this opening sequence. Jacob called Richard “Ricardus.” That’s not his name in either English or Spanish. So what gives? Hey, goober, where’s the meat? I’ll get back to the whole Black Smoke merking rampage on the Black Rock in a second. But first let’s think over the whole convincing sermon Ballsmell lays on Richard.

He claims that Jacob took his body – which is obviously something we’ll be privy to once they do the Jacob/Ballsmell flashback. He claims Jacob is the devil. He hands Richard the knife and gives him the same exact speech that Dogen gave Sayid. So why shouldn’t we believe Ballsmell? Why should we believe that Jacob is the good guy? At this point I think you have to take these two guys at their word. I don’t think they lie. So Jacob mentions the whole ongoing wager he has with Ballsmell – he thinks people are naturally corruptible. Jacob is determined to prove him wrong.

Yet he does so at the cost of seemingly hundreds of dead potential candidates. He essentially brings people to the island against their will to prove that free will exists. So I suppose in that sense, Jacob is the bad guy.

But I see Jacob more as a crazy girlfriend. First, he forces these folks here, and doesn’t invite them into his sweet statue bachelor pad. Cock tease.

Second, he won’t guide them in one direction or the other. This is how his pillow-talk conversations go – sticking with the idea that he’s a crazy girlfriend. I am going to use Hurley as an example, because we’ve seen directly that he’s spoken to Jacob.

Hurley: Are you mad at me?

Hurley: Are you sure you’re not mad at me?

Jacob: I said NO!

Hurley: See, Jacob, communication. That’s our main issue here. If you don’t talk to me how am I going to know what’s wrong?

Jacob: Listen, Hugo. I like you. You’re sweet and funny and you don’t lose any weight despite being on an island where you can’t possibly be eating fattening foods. Well, at least now that the ranch dressing has run out. But I don’t want to tell you what to do.

Hurley: So I can go see the Driveshaft show with my friends?

Jacob: Do whatever you want!

Hurley: And you won’t be mad at me?

I won’t even mention the whole Baptism analogy when Jacob dunks Richard in the ocean. This religious shit is too much for a Jew to handle. In protest I should start calling Ballsmell Haman – famous villain of Purim fame. But I won’t.

When Jacob first said to Richard that he should work for him as an intermediary, I thought that it was a bad idea. Religion spreads, to the point of extremism, because stories are passed down to secondhand sources. These secondhand sources jumble words, change meanings, spread gospel for power, etc. To me, it seemed dangerous. And in granting Richard this power, Jacob essentially caused his own demise. I will explain that a little later.

To play the devil’s advocate, no pun intended, can Jacob be the devil? Absolutely. Do I think he is? No. Isabella was a good person. She urges Richard to stay away from Ballsmell – the man in black. Jacob claims to be protecting the world from evil. Fine. The one line that keeps rolling over and over in my mind, as stated by Kevin Spacey in The Usual Suspects:

“The greatest trick the devil ever pulled was convincing the world he didn’t exist.”

Having said that, I still believe Ballsmell is evil.

Which brings us back to the black smoke. I think it’s pretty clear that Jacob is not a shape-shifter. He cannot take the form of a dead relative. An ex-lover. An imaginary friend that lands you in the insane asylum. Ballsmell, however, can take on those personas.

The Black Smoke clearly has the ability to read into an individual’s past. He kills at will. Then why was Richard spared? This is explained, cryptically perhaps, by Jacob. Ballsmell believes that everyone is inherently evil. But that won’t stop him from 1) using fear to inspire the easily-swayed to join him or 2) killing those he thinks might be harder to convince.

So he comes along, in the form of the smoke. He sees Richard – who has killed before. He also notices that he is a very religious man, evident from his past along with the cross around his neck. This is why Ballsmell uses the term “Devil” rather than just “Evil Incarnate.”

A killer, even an accidental one, has the ability to kill. The will to murder. He is the perfect person to try and corrupt. Just like Eko, who was also once spared by the black smoke. But once Eko got down on his knees and told Ballsmell, in the form of Eko’s brother Yemi, that he was a good man, a changed man, the Black Smoke did away with him.

Another example? The Black Smoke looked into Locke’s past and saw that he was a man in need of guidance. So instead of killing him, the Black Smoke was DRAGGING Locke into the temple. That is until Jack dropped dynamite down the hole.

The Black Smoke kills those that are too strong minded to be corrupted. He’s a sore loser. Jacob brings people to the island to prove his point. Once he does, Ballsmell does away with them. People who have done bad things – like almost all of our survivors – come to the island with a clean slate. Some want to keep it that way. And when they do, they die.

It happened two episodes ago.  If you didn’t want to leave the temple, if you’re were going to be stubborn and convince yourself that you’d be better off following Jacob, you got got.

Then why not kill Richard once he chose Jacob’s side. Well I believe this is the first clarifying moment in the entire episode.

Richard knows, thanks to Jacob, that he didn’t really see Isabella. It was Ballsmell. So now, you have to imagine that Richard is skeptical every time someone sees a dead person on the island. Ben escapes the boundaries of the Dharma Initiative (where the Black Smoke can roam freely) and sees his dead mother in the jungle. He tells this to Richard.

If I’m Richard, I’m thinking, “Eff balls. This kid is going to be corrupted just like I almost was! I need to help him. Jacob gave me this responsibility. I’ll go tell him.”

Richard tells Jacob about Ben. Jacob is skeptical. As Miles said, up until his death, Jacob thought, “I really hope I’m wrong about [Ben].” Wrong way back then, that Ben was one who was easily corrupted and hungry for power.

So it was RICHARD’S call to bring Ben into the fold. It was Richard’s decision to save Ben’s life and bring him to live with the Others. It was Richard, once fooled by the vision of his dead wife, who decided to save Ben from the fate he should have had. And this is why Ballsmell spares Richard. It was all part of a bigger plan. It’s why he says “sooner than you think” when he breaks the wine bottle. Because let’s be honest,100 something years is a blink of an eye in the grand scheme of eternity. But it only ends once. 7 episodes from now. Everything else is just progress.