How To Deal With A Stage 5 Clinger 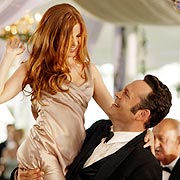 A friend of mine called me up today to discuss a situation he is in. “Brian, I banged a gorgeous girl, with incredible fake tits, but she’s only twenty, and she has already texted me 24 times today…IT’S NOT EVEN NOON!! What do I do?” Naturally, I asked to see a picture of her to verify her “hotness,” and upon my immediate approval, I figured I’d give him some advice on how to hook up with a stage 5 clinger who was six years younger.

Without further ado, here are my top 10 notes of advice to encourage all of you young men out there to continue to fuck the hot girl who still requires a fake ID while avoiding her post sex attachment:

Stage 5ers tend to become more attached when you don’t wrap your tool. Besides, she could have herpes, and that shit itches…

9. The After Sex High-five:

If your clinger says something along the lines of “Baby that was fantastic,” you reply “I know – I’m awesome,” with a high-five going along with your comment. (even if you did just prematurely ejaculate from the site of those titties) High-fives= let’s be friends, especially after sex.

If she tries to make plans to see you again tell her you’re going on vacation with your good family friends. Then if she inquires where you’re going, tell her: Guatemala. Come to think about it, you may know the family I’m going away with. Do you know who Amanda Bynes is? We go away with her family every year, and last year shit got crazy in the hot tub.

Tell her you own you’re own business, and you’re always traveling. If you don’t respond to her 47 messages, tell her you were in a client dinner, or fucking a hooker. Both happen often while being away on a business trip.

You play a lot of golf, and often spend the entire day at the club. By the time you get home, you’re tired and just want to relax. She’ll start thinking you’re like her father: a lazy old man.

Respond to her barrage of text messages with one, one word text message answer. Make that word an obscure one like “antlers.” She’ll think you’re weird in no time, and would never want to introduce someone like you to her parents.

Prematurely ejaculate, or fake a premature ejaculation the last time you want to have sex with her. Let her know this is a problem for you with a line such as, “It’s not you, it’s me…”

You’re business is filing Chapter 11 bankruptcy, and you’re too embarrassed and too broke to look her in the eye.