Hugo Ego Versus The Icy Roof

It’s Thursday and I am halfway done writing an article for the site watching the Saint John’s game and I’m starting to realize something. This article fucking blows, and I could go for a nice cold Budweiser (besides the fact). Earlier in the day I was in my friend’s car coming home from the gym. I asked him for advice on what I should write an article about. He said, “Make sure Hugo lives strong, if you’re going to write a terrible article, don’t even do one.” 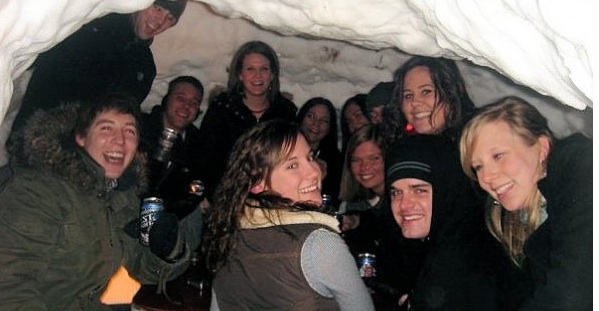 This was probably the best advice I ever received; if you can’t make it good, fuck it. So now I am sitting here procrastinating and thinking of a story to tell. I figure that I should shed some light on my readers. I would like to tell a story about a day that will always live in my memory. There is no real moral to this story, except for you to thank god that you aren’t me or friends with me. This story is 100% true (from what I remember) and told to you by a full-time American (me). It is important to be shared so you won’t fuck up like I did on mother nature’s gift to college students: a snow day.

It all started at college on a peaceful Thursday morning. I woke up and found out that classes were cancelled and that things were about to get realll wild. I decided to neglect the fact that most likely it won’t keep snowing until the following day and would instead act like there was no shot I would have an Earth Science test. 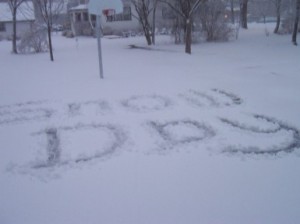 I was like a kid on Christmas morning trying to wake up my parents for presents, except by parents I mean my roommate and by presents I mean a 30-rack of Busch and a Joose grape drink (still got creepy before Lokos). My slightly slow, inbreeded landlord was plowing all the snow into a corner (which was perfect for reasons you’ll read about later) as my neighbors were trying to peg him with snowballs. As soon as I got back I started cracking. I asked my roommates if they wanted to have a snow day banger as though it mattered, if they said no, I was going have it anyway. The mass text went out faster than the lights during a boy scout meeting at Neverland Ranch. Around 2p.m., people started showing up. My roommates proceeded to get high and build an igloo which actually turned out to be pretty good. Icicles began to be used as ice luges and the beers began to flow. We were snowed in and loving it, at least until the hunger hit. 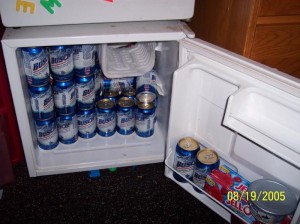 Like every college fridge, we only have condiments and beer in it, and of course we don’t cook. During times like these, food must be supplied to us by the only kid whose mom pays his credit card bill (thank you Ms. E), so we began to feast. Sheets of pizza, mozz sticks and wings, it was amazing. I ate like I was heading for lethal injection. Kobayashi would even be impressed.

Drunk and stuffed. I went on the prowl for the next best thing to beer and food, do I have to say it? Alright, I’ll say it, a delicious roast beef sandwich. When I’m on the hunt, I like to hit on 3-6’s since I don’t go too high because failing isn’t an option, and don’t go low enough to the point of turning into stone if I look into their eyes. I began to negotiate in the oval office for some loving. Of course, story of my life, I forget to lock my door. It was some girl looking for her coat. I think it is programmed in girls that they feel the need to get dressed after other people see them naked. So fuck my life. I walked out of my room and turned my frown upside down, nothing else to do now but to crack the Joose. The igloo became the main attraction of our house. People from the local newspaper stopped by and took pictures of it and random people asked to go in it (that’s how entertaining the local community is). The more I drank, the more unpleasing it was to me. I saw it as a distraction of a good time. I ran upstairs and opened the living room window and began to jump out onto the igloo. It was built like Nick Mangold’s sister (google image it). I started to have the time of my life putting my body into harmful situations. Every time before I jumped, I would chug a Busch, that’s how easily I’m amused. Every time I would land and roll off, someone in the igloo would kick snow on me and use the phrase “stop it, dick.” But in my drunken state I felt like they were cheering for me to keep going.

I began to have some groupies, a lot of people started to jump out the window. I stopped since I wasn’t the center of attention anymore. The drunker I became, the more juvenile I became. Snowballs started flying. I heard grenade so I ducked and some random girl got smacked right in her gunther. She called my friend an ass hole, so of course I had to ask her the next question. “What was that? The ugly stick? Looks like it hit you.” She stormed off. This is when the downfall starts. 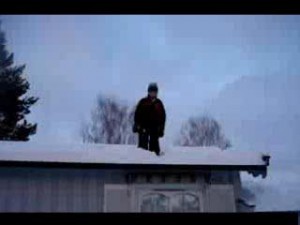 See, when I’m drunk I am not very logical. I said, “Zito (my friend), lets go on the balcony and hit those girls again when they’re walking down the driveway.” This would be logical if I didn’t have a plowed side lot they could get out of, and my driveway wasn’t covered with 18″ of snow AND on a 45 degree angle. Second drunk statement:  “Let me hop on the overhang to see if they’re coming down the driveway.” You don’t have to be fucking Steve to see there’s a blue’s clue on that, something bad is going to happen. So now I’m on an icy overhang about 15-20ft above my driveway, wearing shorts, a tank top and no shoes. My friend Zito was drunk but he actually was logical and said, “If you fall I’m not helping you.” With one hand on a snowball and the other on my ego, I responded, “I don’t need your fucking help.” Then god proceeded to punish me.

I looked at my hand. God started prying one figure at a time off the post until there was none on. I slid back with a “fuck me right?” smirk on my face. Legs hit the cable wires so perfectly that I could stare at the stars as I was free falling, thinking fuck my life and that girl who had to get her coat. What a way to leave the world: blue-balled and your last statement being “I don’t need your help.” Impact happened. Still staring at the stars, I wondered if I was dead. I heard a yell from inside the house that I fell off the roof. I couldn’t feel my legs but my ego made a deal with my adrenaline to let me army crawl up the hill through the snow to my front door. As far as I knew at the time, I could have been Paul Revere because I didn’t use my legs once. I heard everyone coming down the stairs, so I thought, what the hell, I’ll try my legs out to see if they still work. I arose as soon as the door opened and saw my friend. They all laughed because I looked like Frosty the Snow Man just made me his bitch. I stated yet again I don’t need your fucking help. Managed my way up the stairs, sat down, and proceeded to drink. 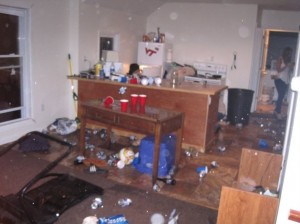 The next day I woke up and classes weren’t canceled. My back was aching and I was hung-over like Darryl Strawberry after the 86 World Series. I stumbled to Earth Science and got a 36 on the test. I drank at night just for the fact that I survived. Like I said at the beginning, there is no moral to the story. To my readers, if you ever are in a situation to hop onto an icy roof, please do it and let me know if God only hates me.