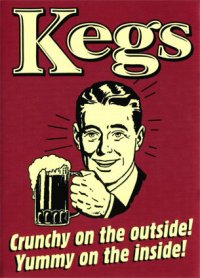 I think all college kids (and former college kids) agree…nothing makes drinking more fun (sex and/or hard drugs aside) like good old competition. Whether it’s flip cup, beer pong, or drinking every time the word “dude” is said in The Big Lebowski, once you add a game with rules to a night of drinking, the awesomeness-level increases exponentially. Who doesn’t love a little competition? Pussys that’s who, and your not one of those. Right? Is beer pong getting a little old though? You need a real challenge, and The Campus Socialite has one. The Keg Race!

Having just turned the ripe old age of 25, I have entered my twilight years of alcoholic masochism. But one of the greatest nights I ever had in college was the night I was asked to participate in a Keg Race. What is a Keg Race? Exactly what it sounds like. Well, not really. There are 2 or more teams of any number of people (I would keep it above 15). Each team gets their own keg and starting all at once, the teams try to finish their respective keg. I’m sure you get the point, but for my slower readers, the team that finishes the keg first is the winner.

Needless to say, you will be very very drunk by the end of this, which will make being the winner all the more sweet. If you don’t win? You will be shunned by the community, and will be expected to continue drinking until alcholic coma and/or death begins to set in. Just kidding! You’re fucking wasted, and so is everyone else in your immediate proximity. Everyone wins! 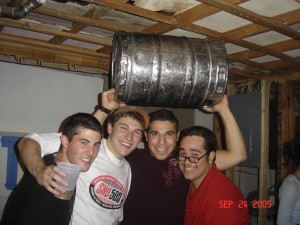 There are about 200 beers in a keg, so unless you and your immediate friends have been training for the beer olympics, you will need a decent amount of people per team. When we did it we used 20 man teams, so each person had to drink about 10 beers each. Enough to make it challenging but if you weigh above 150 pounds, it most-likely won’t kill you. This is perfect for frats or sororities, because there is a giant pool of people already avaliable, and ready to drink at any time. You don’t need to be in a frat though. All you need is a big group of friends, some challengers, and a house to hold the race at. Preferrably one with a big basement. We only used two teams, because we weren’t a frat and the basement didn’t really allow for more than 40 people. But if you can get more than 2 teams to participate, and have the facilities to accomodate them, by all means go crazy. Get the whole Greek Community involved. Perfect for a mixer.

So did my team win? Fuck yeah we did! The key was good personell, and a great strategy going in. My advice is to enlist the help of a pumper. The pumper will not actually be drinking, but instead will be continuously pumping the keg and distributing beer to the actual competitors on the team. This could be your local recovering alcholic, or that girl you know who won’t drink anything without the word “pomegranite” in the name. At some point over the course of competition, someone should do a keg stand too. It does nothing for you strategy-wise, but it is a great morale booster. 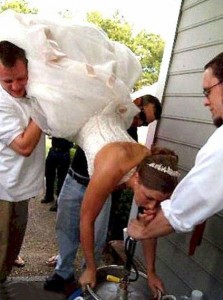 Another good tip, is rather than using cups, which need to be re-filled every minute, everyone on my team was given a washed out milk carton. A milk carton will last you a while before you need to be re-filled, and towards the end, will give you an idea of how much beer is left in the keg. The most important key i’ve found though, is your entrance music song. Come out to something confident and something powerful. 80’s is best, but 80’s revival is a close second. We went with “Live To Win” by Paul Stanley. It worked wonders.

Sound good socialites? Try it out, get all your friends involved, and let us know what you think. You can post videos on our Facebook feed, or E-mail us. If they’re good, maybe we will post them on the site. Just remember: Drink responsibly (Editors note: LOL).

Hoodie Allen “You Are Not A Robot” Video 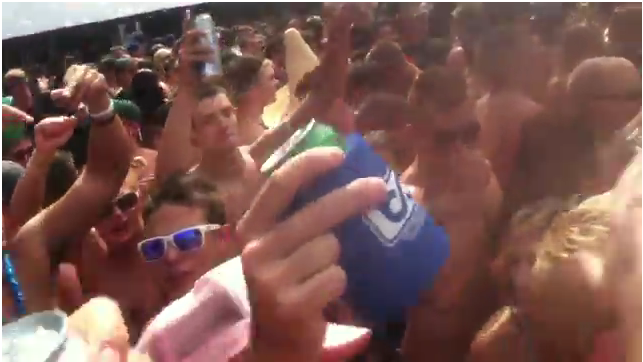