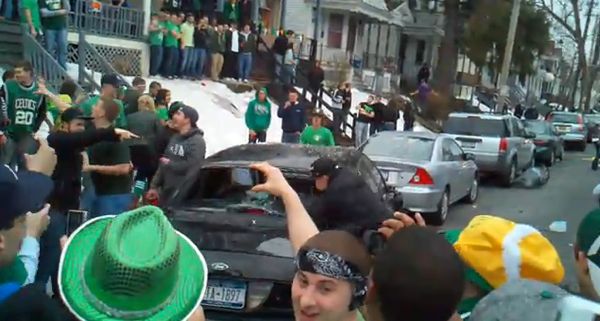 St. Patrick’s Day, the perfect holiday for college students. There’s binge drinking, dress-up, fighting, ambiguous origins. But what makes St. Patrick’s Day really unique is that every college has their own way of celebrating. I realize this is a nationally read blog, but here in the north-east, there is one particular St. Patrick’s Day celebration that takes things, shall we say, to the limit. I’m talking about none other than SUNY Albany’s Kegs and Eggs. When it comes to general debauchery, Albany is unmatched, and this year’s annual Kegs and Eggs was no different. Or was it? According to UAlbany President George Philip, things were worse this year, so much so that the school has decided to cancel Fountain Day.

You may be asking yourself “What’s Fountain Day?” Fountain Day is another anually celebrated holiday at Albany, taking place at the beginning of Spring. On this day, students trek down to the giant fountain in the center of campus, where they all jump in, strip down to as little clothing as possible, and then proceed to ceremoniously beat and fuck the fuck out of each other in a pool of beer, liquor, water, vomit, and their own urine. Sound crazy? You should see it in person. So why would the school want to cancel such a joyous event? In the wake of The St. Patrick’s Day “Riots” as they’re being called, the school doesn’t want to give students another excuse to binge drink. Straight from The President’s mouth: “The need to proactively respond and to uphold our reputation has never been greater.”

So what exactly happened at Kegs and Eggs? How much drinking and fighting drives a school to cancel their signature holiday? As I mentioned before, the word “riot” is being used, which implies much more than a celebration gone wrong. The Albany police reported that more than 40 students were arrested in connection with Kegs and Eggs. Numerous videos have flooded the internet with students shown destroying civilian cars, cop cars, throwing bottles at each other, and apparently at cops as well. In one extra classy video, a group of guys can be heard cheering for other students to flip a car, and even firing a firework at a random passerby from their 2nd floor window. God bless the internet.

Basically from all accounts, the event seems to have been absolute and utter chaos. I happened to be at Albany for Kegs and Eggs 2 years ago, and I can’t say I saw a car get flipped, but it was pretty bad. At one point, I distinctly remember walking 4 or 5 blocks to a friends house, and seeing a fight (often 2-3 on 1) on just about every corner. I also saw the residents of two 4-story buildings on opposite sides of the street, firing cans and bottles at one another, as people in the street ducked for cover. This eventually lead to a 10 student brawl, reaching it’s climax when one student broke an ice luge over another one’s head. Even with all of that, nobody referred to Kegs and Eggs 2009 as a “riot.”

So what caused this year’s Kegs and Eggs different from the one I experienced, or any of the others? Maybe it was the price of cigarettes, or the short-comings of New York sports teams. Maybe the students were staging a demonstration in support of Libya and other tyrant-run countries in the midst of rebellion. I’m gonna say not. More than likely one asshole, suggested another asshole do something assholeish, and the assholeness just spread from there. Either way, when you look at the video tapes, it’s hard not to think that these students had it coming.

In the end, Fountain Day, or St. Patrick’s Day underwater, is now canceled. Not only that, but the fountain is scheduled to undergo construction next year, and not be fully functional until 2014. Also, the school plans to move spring break to coincide with St. Patrick’s Day, which I assume is meant to hopefully get some students to cause terror in their hometowns, instead of flooding the city of Albany. Lesson learned Socialites. Party and drink your face off, maybe even start a fight or two. But don’t go flipping cars and pissing off cops in great numbers. Save that for when your baseball team wins the World Series instead. Trust me, they wont cancel that.