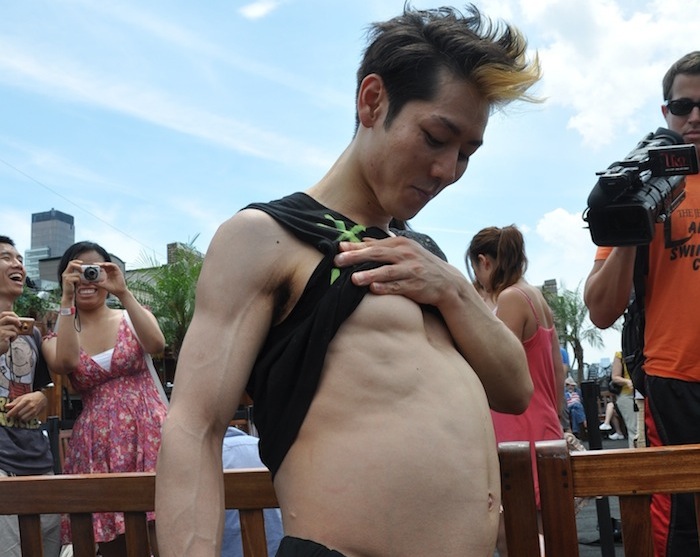 Takeru Kobayashi gave Joey Chestnut a big “fuck you” yesterday when he beat him in Nathan’s Hot Dog Eating contest…from a rooftop miles away in Manhattan. Kobayashi wasn’t allowed to compete in the contest due to an ongoing contractual battle with Major League Eating.

Kobayashi was arrested at last year’s contest when he charged the stage after Chestnut won the championship for the fourth year in a row. Although he was not allowed to return to the official contest, he swore to beat his rival, and we can safely assume that he did just that from the rooftop of 230 Fifth.

Altogether, the Japanese food-munching monster ate 69 hot dogs and buns in 10 minutes (and put on 18 pounds doing it), sometimes gobbling down multiple dogs at once, and always grabbing food from multiple trays, all the while racing Joey Chestnut, who appeared on a nearby screen.

So will Kobayashi’s record count? He obviously won’t get the satisfaction of being named the Nathan’s champion, but the dude DID just set a new world record, so he should at least get the credit for that. Hopefully, MLE and Takeru will put their differences aside and work something out so the man with the iron stomach can return to the main stage and give Joey Chestnut a real run for his money.

5 Essentials for the Perfect Summer BBQ