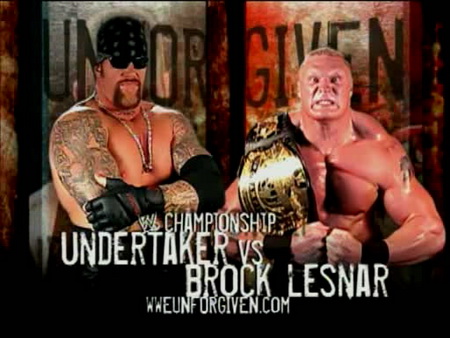 Saturday night’s UFC 121 PPV was packed with newsworthy developments. Jake Shields won his first UFC fight and became the next contender for the Welterweight, lining him up for what will likely be a fight with George St. Pierre. Brock Lesnar got demolished by Cain Velasquez, the new heavyweight champion and the FIRST Mexican Heavyweight Champion in combat sports history. BUT…at the end of the night it seemed like what everyone was talking about was a small internet interview that MMA Journalist Ariel Helwani of MMAfighting.com (who can be followed on Twitter) conducted with WWE performer The Undertaker, who was there in attendance to watch the fights. This was not the first time The Undertaker had appeared at a UFC event, as he and other professional wrestlers such as Steve Austin, Hulk Hogan, The Rock have all come out and said they are huge fans of MMA and especially of their former co-worker Brock Lesnar.

The interview takes an odd turn however when Brock Lesnar begins to walk by the interview on his way back to the locker room, having just been defeated. This happens around the 50 second mark, where Undertaker turns his attention towards the bloody heavyweight and says “You wanna go?” implying that there is a personal beef between the two monsters. Brock pretty much ignores him but he sure didn’t look happy. He did just lose the biggest fight of his career, so there’s no telling whether or not he knew what the hell Undertaker was talking about or if it was just the perfect time to get that type of reaction. Helwani went on to ask Undertaker what that was about, to which Taker responds “it’s personal.”

Up until this point one would assume that Taker was in attendance to SUPPORT his former WWE co-worker by sitting cage-side at the huge event. Dana White, who was asked about the incident after the fact, admitted that he, too, thought they were friends and any words exchanged were probably an extension of some sort of inside joke. Once this video hit the internet and captured the imagination of UFC and WWE fans everywhere, writers such as WrestlingObserver.com‘s Dave Meltzer inferred that this whole thing might actually be a part of a master plan to get Brock Lesnar to wrestle The Undertaker at next year’s Wrestlemania. If this is the plan, then Dana White (who ultimately would have to let Brock do this because his contract says he can’t) has not yet been contacted about it and it looked as if Brock was oblivious as well.

Rumors are flying that Vince and the WWE would offer Brock as much as seven figures to have him put his UFC reputation on the line against Taker and his streak for what might possibly be the highest profile match they could put on for next year. For a company that has been struggling to put together big matches in recent years and has been forced to look to outside celebrities to garner huge buzz and big buy rates (Donald Trump, Floyd Mayweather), Brock Lesnar might be the guy they could bring in to really get people talking. The story would then be…which is going to happen? Is a 20 year win streak really going to end? Or is UFC going to let their BIGGEST star do a job on a fake wrestling show when he is the prime of his career. Ironically, after Saturday…Lesnar looks the most beatable he has ever looked and whatever sort of story the WWE might draw up for him to lose to the Undertaker, there is a good chance he will still look better than he did on Saturday when Cain Velasquez outmatched him in every stage of the game and brought him to the ground with fierce strikes to the head. This will no doubt be what everyone in the world of MMA and wrestling is talking about over the next few weeks, and possibly even months, as no one knows what Brock is going to do following this earth shattering loss. Some say he might take some time off, but others think he will want to get right back out there and prove himself to the world once again. Who knows what Dana White will say about this if he is ever formally approached by the WWE about borrowing his star for Wrestlemania. Who knows what type of deal the WWE might attempt to make with the UFC, and if the two companies can ever work together – similar to how professional wrestling companies and MMA companies have been doing in Japan for decades. Only time will tell. One thing is certain though…this story is so unbelievable that it causes one to watch that interview over and over again. If for no other reason than to see the odd contrast of Undertaker doing what looks to be an OUT OF CHARACTER interview as a fan at a UFC event, where he all of a sudden comes out and starts to PROMOTE AN ANGLE that Brock Lesnar might not even know is going down.

Is Vince wrong for trying to use the UFC and their popularity to build up what could be one of their future story lines? Will UFC work with the WWE? These questions and how often they will be asked in the next few weeks are exactly WHY this is a great idea for an angle and most likely WHY Vince and/or Undertaker went out on a limb and gave it a shot. NOW we get to see what comes of all of this…not only is wrestling a soap opera…but sometimes…so is life.

For Those Who Missed It…