2008 Republican presidential nominee John McCain and his wife, Cindy McCain seem to not being seeing eye to eye these days after she recently decided to pose for an advertisement endorsing gay marriage advocates in California.  The photo (as seen below) shows Mrs. McCain with duct tape across her mouth and ”NOH8” written on one cheek. NOH8 is a gay rights group challenging Proposition 8, which was passed by Californian voters in 2008 banning same-sex marriage. 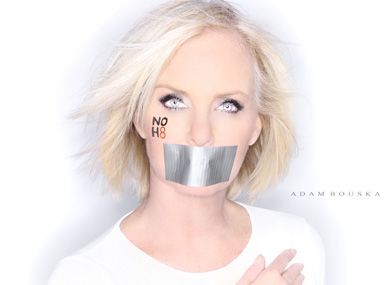 On the NOH8 campaign’s Web site, under the headline “Redefining Republican,” NOH8 writes that Cindy McCain “reached out” to them about the ad.  “Aligning yourself with the platform of gay marriage as a Republican still tends to be very stigmatic, but Cindy McCain wanted to participate in the campaign to show people that party doesn’t matter — marriage equality isn’t a Republican issue any more than it is a Democratic issue.”  The McCain’s daughter, Meghan, is known for her outspoken support of gay rights, and currently features her own shot from the NOH8 campaign (as seen below) as the background on her Twitter page. Meghan McCain has spoken at a number of gay-rights events and plans to continue her support just as passionately in the future.

Senator McCain’s office issued a statement saying he respected the views of members of his family but remained opposed to gay marriage. He still believes marriage was ”only defined as between one man and one woman.”  This ad is definitely rooting up deep questions about John and Cindy and their obviously conflicting views, and possibly even the strength of their marriage.  Will this affect John’s political career and the level of respect he receives from his supporters?  Unfortunately, I’m going to have to say yes.  But his determination to stick by his personal views even without the support of his family is very admirable, and I hope that republicans and democrats alike can see him as an example of a strong and unwavering politician.  Good luck trying to find another one.

Take A Peek Through the Looking Glass with Almost Alice

Hula-Hoop the Pounds Away