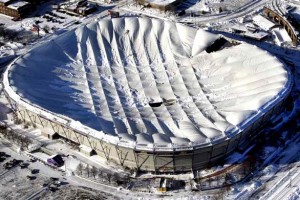 It’s old news by now, so unless you live in a backwoods, banjo-playing, date-your-cousin type area with little connection to the outside world, or have simply spent too much time studying for finals, you’ve probably heard that  the roof of Minneapolis’ Metrodome collapsed on Saturday. While the episode has been a huge pain in the ass for the Minnesota Vikings and the NFL, it is really quite amusing, given that the collapse is very symbolic of the Vikings’ 2010 season. If you haven’t seen it yet, check out this video:

Ever since then-head coach Brad Childress and a few of his players skipped out on a day of training camp to beg Brett Favre to return to the team once again, the Minnesota Vikings were destined for failure. For when a franchise relies on something that’s aged and weathered, like Favre, it can turn out to be just as catastrophic as the fate of the Metrodome roof that fits a similar description. A second season of Brett teamed with Childress, and  a little taste of Moss thrown in for good measure, was  enough to bring the proverbial roof down on the 2010 Minnesota Vikings.

Favre has turned in what could go down as the worst season of his long, storied, and over-dramatic NFL career, and there are still games left to play (if he’s healthy). He even saw his streak of consecutive games started end, unceremoniously partially due to the roof fiasco, in the process. If you wonder why the Vikes’ offense has been so bad this year, look no further than the Mississippi gunslinger’s 23 turnovers (18 interceptions, 5 fumbles lost). As if that’s not enough, Favre has also provided plenty of distraction for his team, given that he has been the subject of an ongoing sexting scandal that dates back to the 2008 season when he was with the New York Jets. 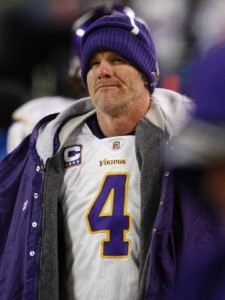 Just one year removed from a run to the NFC title game, Brad Childress completely lost control of his team this season. This fact was, perhaps, most clearly demonstrated when multiple players spoke against him, in the courageously anonymous fashion, to the national media. He also famously mishandled the Randy Moss situation, by trading for, and then cutting the future hall of famer just three weeks later, after not getting along with the star wideout. Chilly’s collapse as Minnesota’s head coach actually predated the roof’s fall because he got cut after a week 11 loss dropped the team to a 3-7 record.

Randy Moss’ role in the collapse of the 2010 Vikings is small, but important. The acquisition of Moss can be likened to the changes in pressure that the Metrodome staff attempted inside the building, in hopes of preventing the roof’s demise. In the end, however, you can’t stop something from collapsing when it’s inevitable, be it a stadium roof or a fleeting franchise. Moss was supposed to be a quick fix for the struggling team, but after his departure, it was clear that the Vikings needed to be rebuilt, much like the current condition of their stadium’s roof.

The 50 Hottest Magazine Photo Shoots of 2010

The Cause of the Brett Favre Scandal: Jenn Sterger(Gallery)