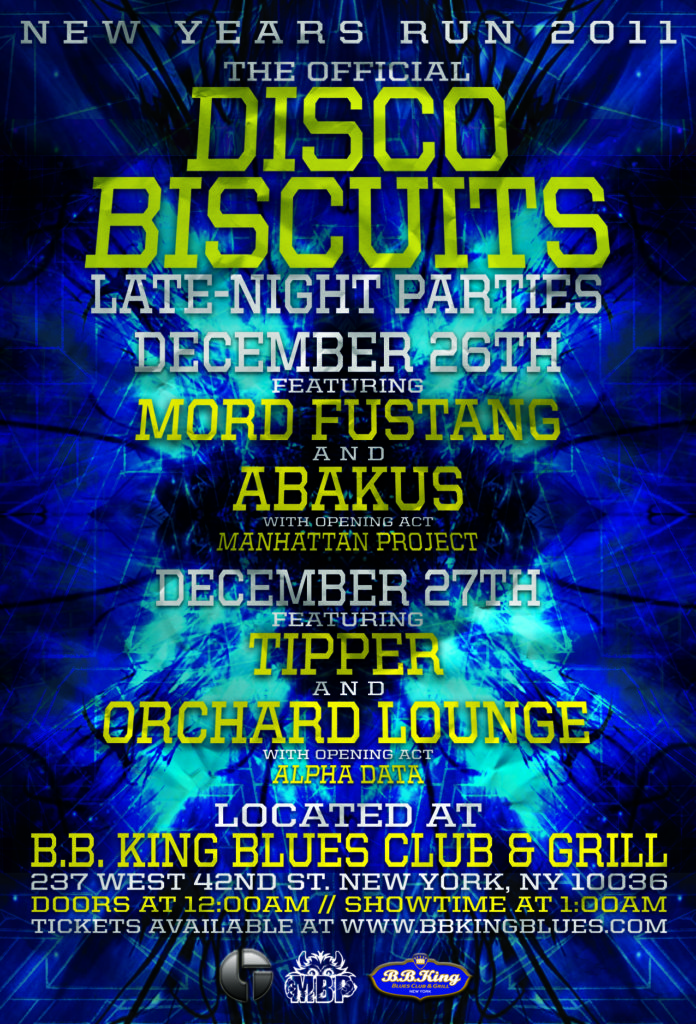 For anyone with half a brain, it’s no secret that New York City showcases the top talent in the world…the best of the best from all over the world play right here in our fair metropolis; and this rings even more true when major events come around such as the week of New Years Eve. With acts like Deadmau5, Nero, Avicii, and Afrojack all making stops, it can almost seem overwhelming to the average concertgoer. Luckily, we over here at Campus Socialite would like to help shed some light on two events that, for anyone who thinks they know electronic music, are MUST SEE shows.

As you may already know, The Disco Biscuits are playing their inaugural NYE run in NYC on December 26th, 27th, and 28th at Best Buy Theater, but the real treats are the after parties that will be taking place after the 26th and 27th shows right down the block at B.B. Kings. These epic lineups were curated by the foremost authority on electronic music in the northeast, the all inclusive promotional and production enterprise Mr. Bugsly Presents, and will feature Mord Fustang and Abakus on the 26th, and Tipper and Orchard Lounge on the 27th.

An intimate venue like B.B. Kings, coupled with the energy spilling over from Best Buy Theater right before, are going to make for some of the explosive parties in New York City’s history. With genres ranging from electro-house, to disco, and from dubstep to glitch-hop, there truly is something for everybody (not to mention that the quality of the music that will be bumping underneath Times Square that night is of the likes never seen before). Here’s a little info and media on the artists that will be melting your face, glazing your dome, and splitting your soul into a million pieces.

Mord Fustand performs “The Electric Dream,” at The Loft in Minneapolis, MN

Since his first release, ‘The Electric Dream’ in January 2011 on Mile Dyson’s Plasmapool label, Mord Fustang has released a total of six tracks with all of them reaching the Beatport Top 100 Chart. His biggest success to date is having his track ‘Lick the Rainbow’ reaching the #1 position on the Beatport Top 100 Chart. He describes his music as, “An adventurously nude fluctuant immaculate rainbow-coated thunderstorm with arpeggios, 1-up mushrooms and disco basslines, plus a wobble or two. Something like that.” Previous to signing to Plasmapool and focusing on the Electro House genre, Mord Fustang released two dubstep tracks on his MySpace including ‘Mushroom Disco.’

Abakus is the avantgarde futuretronica artist project of well know music producer Russ Davies, who also releases nudisco-electro under the Cinnamon Chasers alias, and progressive rock/ambient with his father Dave Davies (founder of 60s cult act The Kinks) as The Aschere Project. Abakus explores the deeper and more emotionally complex side to electronic music and the upcoming album later this year is undoubtedly his finest work to date, an intensely heartfelt expression of the vast amount of music knowledge and experience Russ has acquired over the 10 years he’s been producing and performing globally. Themes of space, other-worlds and dreamlike landscapes are a consistent theme in all of Russ’ music. As a precursor to the album Abakus hits us with an EP entitled Beyond The Fields EP, which features 5 melodically potent and dreamy futuretronic beats, and you can hear many references to his most seminal influencial tracks such as Orbital – Hylcyon, The Orb – Pink Fluffy Clouds, FSOL – Dead Skin Cells, all mutated into his unique fusion of danceable beats and mind-melting soundscapes.

Tipper playing through a Funktion-One soundsystem at Sonic Bloom 2011

Tipper makes music for sound systems, with a diversity that ranges from bass fueled electro-breaks, to hip-hop, to intricately programmed downtempo, to full orchestral compositions etc; music that demands to be played at high volumes to unleash their lethal potential. With a musical background in classical training, and listing influences from drum & bass, to hip-hop, to electronica, Tipper has created his own brand of devastating dancefloor bombs and after club ear-teasers. He is admired for being “streaks ahead,” and his “expertly crafted” productions are dubbed as being “frightening yet refreshing, if it doesn’t move you check for a pulse.”

Tipper has also been heavily experimenting with “surround sound”, and the possibilities of taking sound to new levels. After many hours of tweaking, Tipper has just completed his latest album “SURROUNDED.” Mixed in a 5.1 studio in Los Angeles, he has created a whole new listening experience, with melting melodies, intricate programming, and sounds that circle you in a teasing and sometimes disorienting manner. Once again, Tipper ventures into new ground with this album, keeping it in the downtempo arena and exploring a wide range of styles that flow effortlessly and seamlessly from start to finish.

Ben Silver of Orchard Lounge throwing it down for Albany

Orchard Lounge is a collective of DJs and friends who share the same deep-rooted passion for music. Ben Silver, Spencer Lokken and Bethany “Queen B” Briscoe always try to keep the music eclectic and the mind open. The trio is comprised of versatile DJ’s and they’ve been known to touch on everything from dubbed out downtempo to floor-filling house tracks in a single set. They have graced the decks from the Midwest to the East Coast and have held residencies at some of the largest clubs in Chicago. What makes Orchard Lounge unique is they have held down extremely diverse weekly and monthly residencies such as a downtempo night, weekly house nights, and even hip-hop and funk/soul spots.

“From the Dancefloor to the Couch” is their motto because they play music that can suit any state of mind and environment. They specialize not only in downtempo and deep/tech house, but also keep things fresh by incorporating classic hip-hop, electro, and funk into their sets. The Orchard Lounge crew also never takes things too seriously, and they understand the duty of the DJ as the middle man. Concerned most with spreading other people’s art, Orchard Lounge wants crowds to acknowledge that the real heroes are the people whose names appear on record sleeves. Aside from playing out, they are constantly crafting mixes of all styles for their website www.OrchardLounge.com, which showcases their programming skills as well as their creativity and has yielded some impressive bookings. They recently spun in NY at Camp Bisco, a festival put on by the band Disco Biscuits, for a crowd of over 5000 people.

So there you have it ladies and gentleman, a preview of what are going to be the best parties NYC has to offer for the coming New Years festivities. Along with these artists, there will also be support from The Manhattan Project, Alpha Data, and the winners of the Mr. Bugsly Presents Producer Contests, Psyclic Nature and Ian Stewart. For more information on the freshest beats in the northeast head over to http://www.mrbugsly.com and we’ll see you on December 26th and 27th LATE NIGHT! 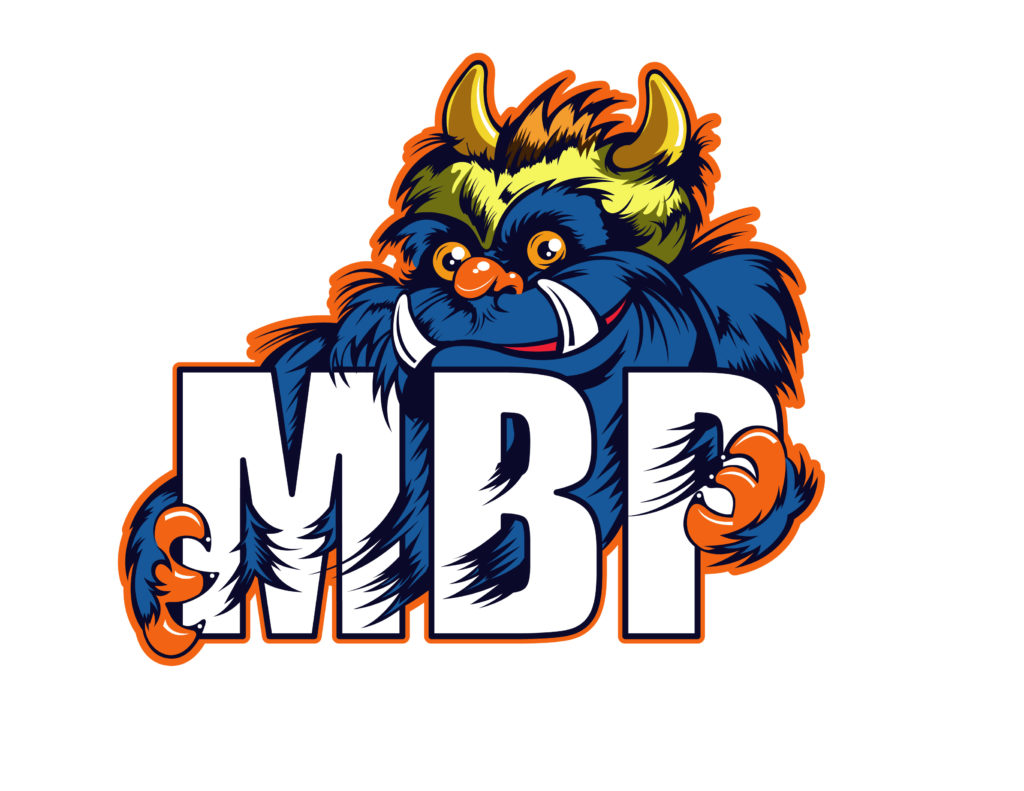