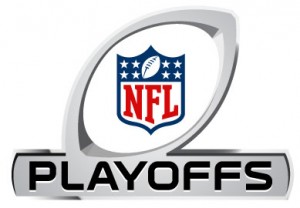 From the creator of StarBust Football Inc.

So this is how the NFL Playoffs will shake out, based on The Campus Socialites “Better Half Bracket.”  In case you missed it on Wednesday,  check out the introduction to the phenomenal future-telling predictor of the NFL Playoffs before reading further, so you know the players and ground rules of the competition.

While Simpson is no match for Hasselbeck in the athletic realm, she takes the cake in just about every other category. Well, except for brains, but in the playoffs, anything can happen. Saints win.

Despite being a newcomer, LeRoy is no easy out. If this were solely an athletic and/or beauty contest, she would win every time, but have you heard/seen the craziness surrounding Michelle Ryan lately? Jets advance in blowout fashion.

While the entire nation was surprised by Minchew’s selection as the Packers’ representative over Aaron Rodger’s current squeeze Jessica Szohr, Lacey had something to prove in her match-up with Celek. Despite being outsized, the former Miss Louisiana wins. The Packers move on.

This was a tough match-up between two former SEC sorority socialites (Croyle from Alabama; Tuohy from Ole Miss). In the end, however, Croyle’s youth gets the nod, although the fact that Tuohy was portrayed fabulously by Sandra Bullock, in The Blind Side, made this one close. Chiefs win by a field goal.

The paparazzi would drool over this match-up between two celeb hotties. Despite being the better half of mistake-prone QB Jay Cutler, who many believe will fold up like a lawn chair in the playoffs, Cavallari proves that she can deliver in the clutch, and knocks out Simpson. Da Bears win.

This is quite possibly the most interesting match-up in the Better Half Bracket. Gisele might normally be the most publicized and well-known woman in the bracket, but these are not your usual times. Have you seen what Michelle Ryan is capable of?! Jets win in an upset.

The fact that October Gonzalez is “committed to” and not married to star tight end Tony Gonzalez shows just how much of a revolutionary she is. Despite Gonzalez’s status as the NFC’s #1 seed, Minchew refuses to be phased by her underdog role, leaning on past competitive experiences in beauty pageants. The past experience pays dividends as she knocks Gonzalez out of the playoffs. The Packers move on to the NFC title game.

The brunette bombshell, Croyle, faces off against a mysterious unknown in Harlan. The fact that she is crazy enough to marry an alleged sexual predator makes Harlan, Ben Roethlisberger’s fiancee, a very tough out, especially in the playoffs. The Steelers roll into the AFC Championship.

This is an absolutely mind-boggling match-up. In Harlan and Ryan, we have the two most puzzling players in this playoff picture. One is into ridiculous and lewd foot fetish photos and video, and the other is planning to marry an exonerated sex offender. If that doesn’t blow your mind, I don’t know what will. While Ryan is riding a great deal of momentum in the press, Harlan’s courage cannot be underestimated. The Steelers move on to the Super Bowl with an overtime victory.

On paper, this is one features what might be every man’s dream: two beautiful blondes going at it. Miss Louisiana vs. Miss Laguna Beach makes for an easily hype-able NFC Championship game. In the end, the nod has to go to Cavallari because her man is a starting NFL QB, while Minchew’s is a back-up. It’s nature versus nurture, and we all know that nature always wins. Da Bears claim the NFC title.

The Super Bowl yields a game between polar opposites: a SoCal diva (Cavallari) and a Western PA enigma (Harlan). It is a closer match-up than you might think though, given that both date quarterbacks who have proven themselves to be bona fide douche bags over the years. While Vegas would make Cavallari a heavy favorite, Harlan’s incomprehensible decision-making makes her a tough opponent to figure out and gameplan for. Cavallari vs. Harlan is one for the ages, but Harlan’s gambling mentality gives her the edge. The Steelers hoist the Lombardi Trophy! 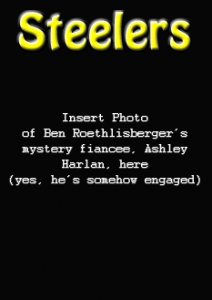 An early congratulations to the Pittsburgh Steelers who, based on this predictor model, will be celebrating a Super Bowl victory on February 6th!!!

AXE’s “In The Woods” Mad Lib Update and Winners