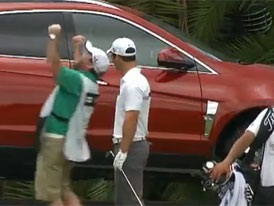 College basketball tournament games and Selection Sunday have been topping sports headlines. This of course, is business as usual for March. Besides Peyton Manning and the Knicks sucking again, it’s all the sports world seems to be talking about. However, there was one other story that caused some entertaining footage for sports fans, in this case, on the golf course.

Pro golfer Paul Casey hit a hole-in-one which drove his caddie, Craig Connelly practically insane. Connelly was told prior to the accomplishment that the golfer would find a way to split the prize if he happened to make the hole-in-one. As per their agreement, Connelly believed that he had just won a Cadillac. There was one problem though. The 13th was the prize winning hole, and not the 15th. It felt like Ashton Kutcher was waiting in the bushes ready to scream “You Got Punk’d.” Ashton didn’t show, but you can still catch all the amusement at this poor caddie’s expense in video form. Sorry Craig.