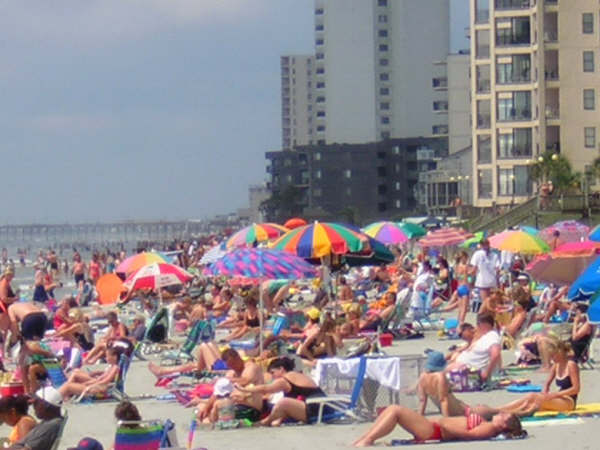 Today, we have a forecast for temperatures to reach almost 100 degrees in Manhattan. 98 degrees of straight sun by noon and no clouds predicted throughout the day. Most of us are home from college now, high schools are slowly releasing their students for the summer and I am predicting some pretty crowded beaches in this heat.  If you’re one of the lucky people able to fill the beach up, here’s a little throwback music for you to tan in the sand to. If not, you’ll make it to the beach eventually this summer, so bring these songs back anyway.

What’s a summer playlist without Sublime? No one knows how to make summer songs like this reggae-fusion alternative band. Pretty much any of their songs can be included on this playlist, but because I wanted to add other artists as well, I chose my favorite one, Santeria. It’s got the summery feeling all over it, and if a song could make you want a beer, dark sunglasses and a towel to lay on, this would be that song.

Weezer is an old school alternative band who has had many, many hits back in the day, including Buddy Holly, Beverly Hills and Island in the Sun. Although Buddy Holly is a classic song, and Beverly Hills is just awesome, Island in the Sun is the one nominated to the Throwback Beach Tunes playlist. It’s one of those songs that sounds like it could be your friends just chilling in beach chairs with guitars. Very low key, very laid-back, very appropriate while tanning.

Alright, I shouldn’t need to describe OAR or Crazy Game of Poker to you, but I will anyway. Crazy Game of Poker is the eight-minute song performed by OAR, an alternative/indie rock band who has been writing and performing together since they were in high school. Crazy Game of Poker is one of their most well-known tunes, and the reason I put it on this playlist is because it’s relaxing and gives off good vibes while you lay in the sand drinking a beer. Totally worth listening to if you haven’t already.

Of course, Dave Matthews Band must be included in a summer playlist, whether you’re going to the beach or just hanging out in somebody’s backyard. Their music is some of the most relaxing music you could come by, old and new, and is incredibly popular with people of our age. Just throw on any of his tracks while you nap on the beach and you’ll be set.

Although this one was never as mainstream as the other four, it deserves just as much recognition as the rest of them. Besides the fact that Butch Walker is my favorite musician, he also is the producer for bands like Weezer and Sum 41. He writes all of his own music (and some of theirs, too), and the #1 Summer Jam is appropriately titled for its laid-back beat and lyrics. Because it’s the beginning of the summer, why not start it off right with the song boldly titled as the #1 Summer Jam?

The Traumatizing Stages of an Emergency Number-Two