Some of the Most Ridiculous Celebrity Demands and Riders 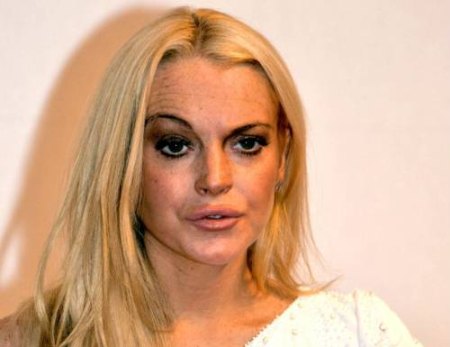 We’ve got the scoop from the good people at The Smoking Gun about some of the most ridiculous celebrity riders (you know, it’s like a list of demands that celebs ABSOLUTELY NEED before an event). We know food and drinks are standard but you won’t believe what stars like Katy Perry, Mariah Carey and  Sarah P are demanding from hosts. Yikes, celebs, your bitchiness is showing. 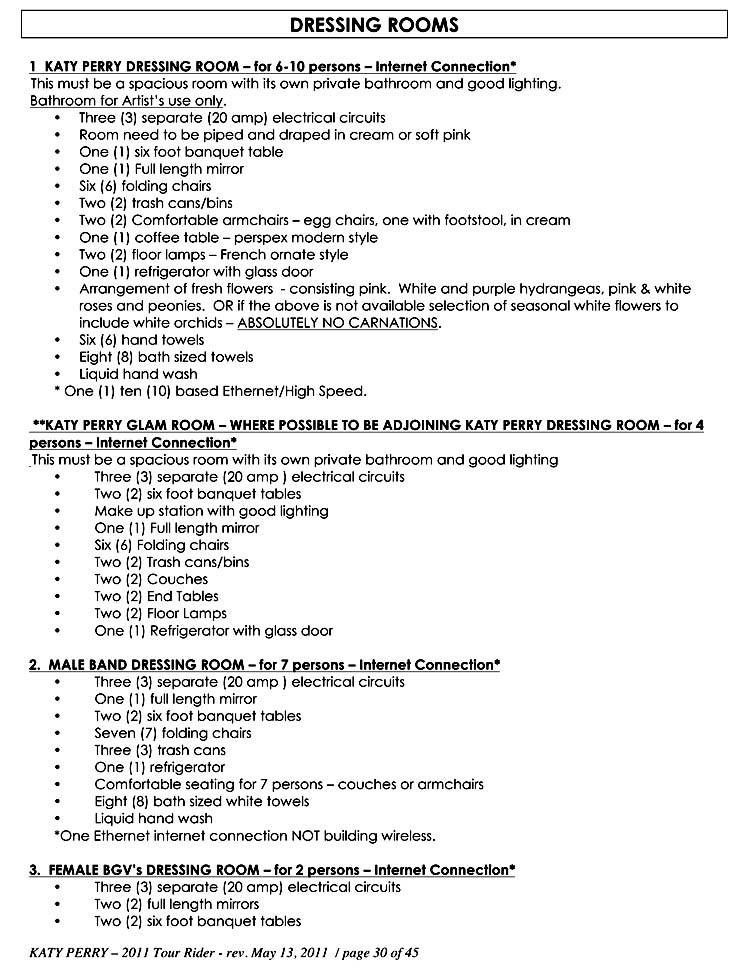 These are not the only celebs showing their diva. According to The Smoking Gun, Katy Perry’s rider lists her demands as two cream-colored egg chairs, a dressing room draped in cream or soft pink, French ornate-styled floor lamps, water dispensers in all dressing rooms and production offices, plastic SIGG bottles for tour personnel, and a refrigerator with a glass door … just to name a few.  Also, chauffeurs are not allowed to converse with Perry, and cannot stare at her though the rear view mirror.  Mmm, take yourself quite seriously, don’t you?

Some pregnant women eat for two,  and others, like Mariah Carey who was pregnant with twins at this time, demand accommodations for three. Carey demands vanilla  aromatherapy candles and white roses throughout her dressing room. She also wants no “busy patterns.” Only black, white, grey, cream and dark pink. The room must be a comfortable 75 degrees, and she insists on a lamp so that there isn’t any harsh lighting. Carey’s demands are pretty reasonable for a woman with decades of singing experience under her belt.

When she’s not out viewing Russia’s skyline from Alaska, Sarah Palin is making crazy demands for her six-figure-worthy appearances. If she’s not flying first class then Palin requires her flight be a private jet, which must be 60 ft or larger. Her hotel accomodations are equally ridiculous. She requests three hotel rooms, one a suite, in a deluxe hotel. If you’re snapping pictures of the former senator then it must be at a prescribed rate of 60 mins/ 100 clicks.  Palin obviously has too much time on her hands if she sat down and thought of this stuff.

DJ Pauly D demanded four bottles of champagne and liters of Grey Goose and Patron tequila in his requested (read: demanded) VIP area for him and his entourage. On top of that, he demanded a suite in a 5 star hotel for him and his buds.

Madonna doesn’t like to lay those guns where others have slept. A hotel source told Closer magazine that Madonna needs a new bed, fresh paint, new lights – new everthing. So the hotel obliged and spent $30,000 renovating a hotel suite for Madonna. On top of that, she demanded 500 bottles of Kabbalah water, which is blessed by a rabbi, for her and her entourage. Outrageous. 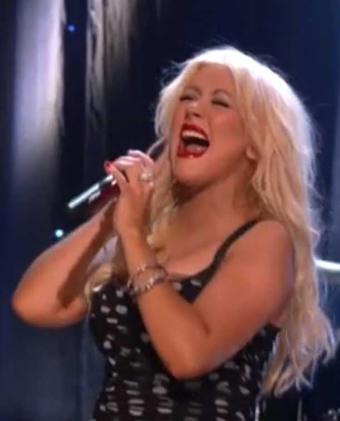 Christina Aguilera insisted on watching every playback to make sure she didn’t look fat. Christina demanded reshoots for every scene she didn’t like which meant all-day filming for the crew.  She also flipped out at a shoot when her cat disappeared from her dressing room. Apparently, she screamed, “Where the **** is my cat?”  The entire staff put everything on pause to help her find her cat.

Crew of Taylor Swift‘s sold-out tour are not allowed to drink or so drugs while working on the tour. In fact, they are submitted to random drug and alcohol tests.

Brad and Angelina are having a $500,000 panic room constructed in their $60 million home. The couple also have multiple security guards on site, which cost $25,000 a month.

A makeup artist for Nicole Kidman revealed that no eye contact is allowed when working on the star’s make up. She even sent one staffer running out of the room crying. 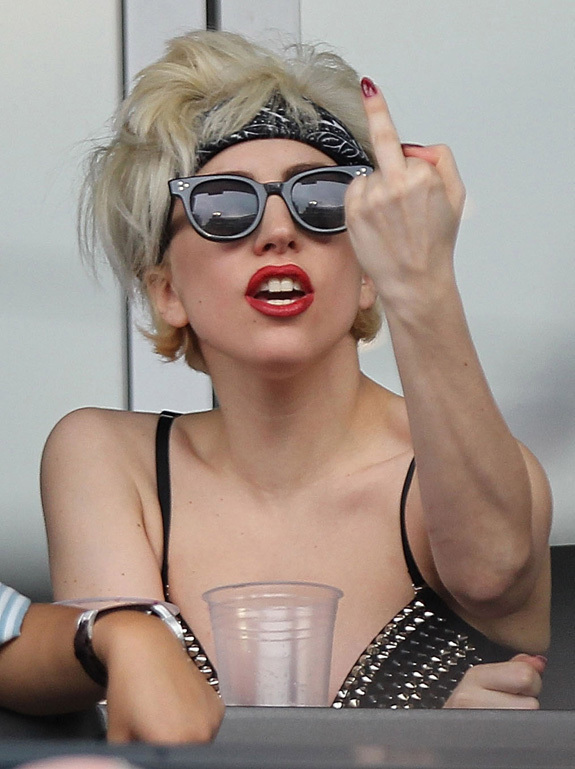 InTouch reports that Lady Gaga has become OCD about germs and demands that her staff travels with the same items, including chairs, cups and plates, so that she can make sure she’s the only one who has ever used them.

Fergie‘s antisocialness was showing one night at LA’s Soho House when she instructed the bounces to keep everyone away from her all night.

Jennifer Lopez denies having an entourage of 50, but she does admit having a hair stylist, a makeup artist and two stylists who work together. She won’t disclose whether the rumor of her having 12 racks of clothing for American Idol is true, but she does admit to “a few.”

Gwenyth Paltrow refuses to carry her own luggage. She hates it so much that she snapped when she arrived at Chateau Marmont and o one was there to help her. She yelled & picked up her own bags before storming off.

Thanks to our friends at The Smoking Gun for the information. 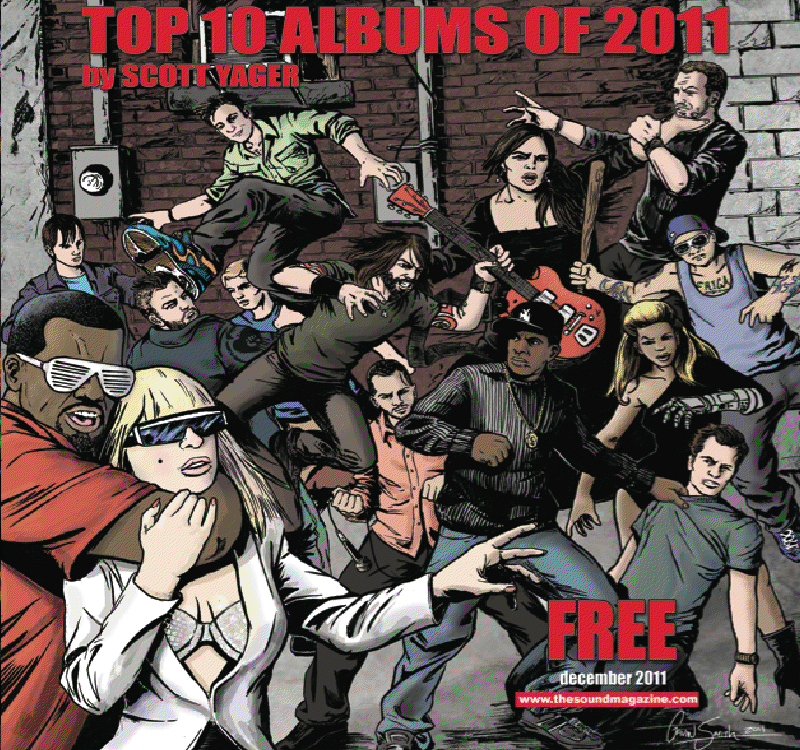