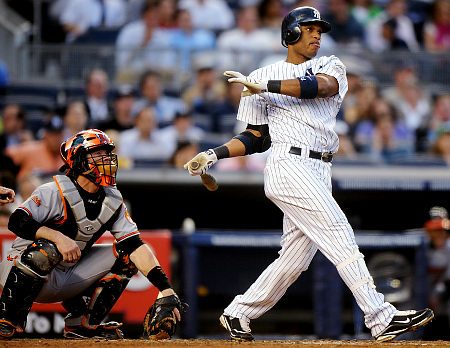 Two days after a fading pinnacle of Yankee glory conquered the last great accomplishment of his career, a younger, still budding Yankee superstar accomplished something slightly less important. Okay, much less important, but none the less, Robinson “New Face of the Franchise” Cano not only won the Home Run Derby and set the record for long balls in the final round. He beat Boston, in the form of Adrian Gonzales.

I know I said I was actually going to watch the Derby because of the live Tweeting, but I lied. Truth is I was browsing the internet when I happened to check ESPN and see that Cano was facing Adrian Gonzales in the final round. Immediately my feet took me towards the nearest TV, where I was disappointed to watch Adrian Gonzales set an initial new record of 11 for homers in the final round. Things looked grim for Cano, who has much more to his game than a power swing, but with 3 outs to spare, Cano smashed his 12th shot to right-center as Arizona erupted.

I know the players put no stock in this what-so-ever, and seeing Cano hug David Ortiz after his win was enough to make me sick. But for a life long Yankee fan, it’s nice to see someone in pin-stripes (usually) win. Good thing for me it happens pretty often. Congrats Cano. Maybe one day you’ll be chasing 3000 hits and you can look back on this day and be overwhelm with pride. Probably not. Is that Erin Andrews wearing a Red Sox hat in my peripheral? Gotta go.