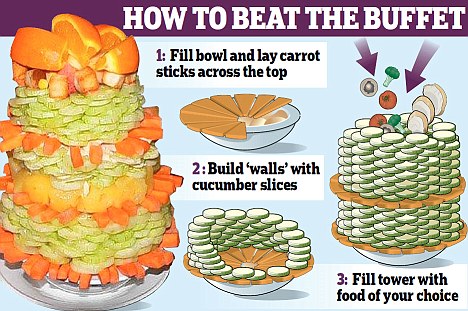 In America, you take as much food as you like from the free salad bar, and if anyone tries to stop you, you tell them to piss off. But apparently things aren’t so simple in other parts of the world. For instance, China, where western food like Pizza Hut is expensive fine dining, and you aren’t allowed more than one bowl of salad. But now Chinese salad fanatics can make the most of their one bowl with some dope stacking strategies. 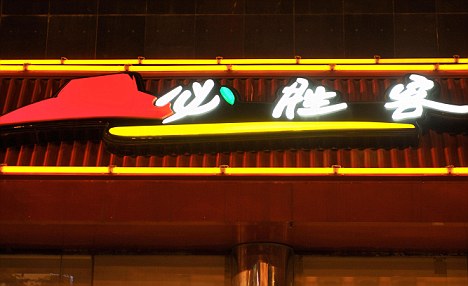 This is for serious. They’re calling it “salad bar hacking,” and it’s legit. There’s a Chinese PDF floating around the internet somewhere that explains some of the methods in detail (I’m scouring the net for it as we speak – so far no go), but for right now we have to go on what we know: Shen Hongrui, a Chinese engineer, is responsible for at least the one picture we DO have (at the top of the page), and we’ve got some of the written instructions to go with it.

First, he tells diners to build a solid base, ideally with chickpeas and potatoes. ‘The foundations are very important, so choose dry and strong material,’ he says.

Next, would-be gluttons must create a layer of carrot sticks radiating from the centre to act as a scaffold.

Banned: Pizza Huts in China have put a stop to the craze by removing all the salad bars in restaurants

Then they should use slices of cucumber or blocks of fruit as bricks to build the tower’s ‘walls’.

Finally, fill the tower with the food you are most keen on eating. All you need after that is a steady hand to carry your heaving platter back to the table.

Unfortunately, Hongrui’s plan backfired (is it just me, or does that guy’s last name sound like “hungry”?). Salad bar hacking became so popular in China that Pizza Hut scraped all of their salad bars. Too bad. But hey, enjoy this video of someone demonstrating the strategy:

Regardless of whether it’s useful in the states, I’d love to see a salad bar hacking competition, because I know some engineering student out there will build something totally mindblowing using only fruits and vegetables.

Some More Jessica Jane Clement For Your Monday